HOUSE JUDICIARY CHAIRMAN TO CALL BARR “IN THE NEAR FUTURE” 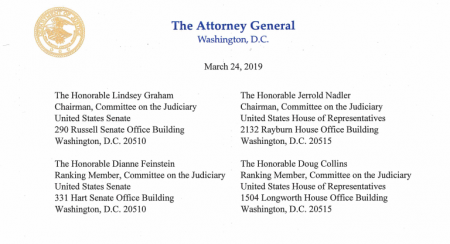 The production of the report to the DOJ marked the official conclusion of Mueller’s nearly-two-year probe as to Russian interference in the 2016 election and whether or not anyone within the Trump campaign “colluded” with Russia to affect the election’s outcome.

Also examined was whether or not President Trump “obstructed justice” by firing FBI Director James Comey in May 2017 or in any other instance.

The statute governing special-counsel reports mandates that they be “confidential” and delivered to the attorney general, who writes a summary, as Barr did less than 48 hours after his receipt of it.  Grand jury testimony and other documentation indicating individuals who might have been under investigation but not prosecuted as well as any pending investigations elsewhere are considered protected information.

The summary letter indicates that over more than 22 months, 2800 subpoenas and 500 interviews, Mueller’s team of 17 politically-left-leaning prosecutors found no evidence of “collusion” between the campaign and Russian operatives.  On the issue of “obstruction of justice,” Barr reported that Mueller chose not to make a determination, instead punting that decision to the DOJ.

Mueller specifically stated on that issue, Barr wrote, “The Special Counsel considered whether to evaluate the conduct under Department standards governing prosecution and declination decisions but ultimately determined not to make a traditional prosecutorial judgment. The Special Counsel therefore did not draw a conclusion – one way or the other – as to whether the examined conduct constituted obstruction…”

Rather, Barr said, the decision was left to the Justice Department to make.  Barr wrote that after he and Deputy Attorney General Rod Rosenstein evaluated Mueller’s documentation on the subject, they found insufficient reason to pursue a prosecution.

House Judiciary Chairman Jerrold Nadler (D-NY) immediately pledged to call Barr to testify to the committee, tweeting that “Special Counsel Mueller worked for 22 months to determine the extent to which President Trump obstructed justice. Attorney General Barr took 2 days to tell the American people that while the President is not exonerated, there will be no action by DOJ.” 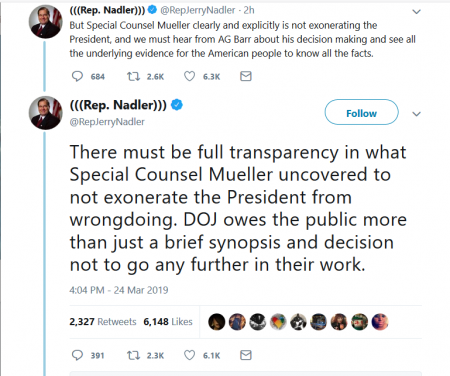 Nadler tweeted at the same time:

He pledged to call upon Barr to testify “in the near future.”

Prior to the news that Mueller had delivered his report, Democrats, who hold the majority in the House of Representatives, said they will continue their independent investigations into Trump, including his years at the Trump Organization.

Despite the expectation that Mueller had found no collusion, a column at USA Today on Saturday reported, without a specific citation, “Prosecutors have revealed that Trump’s campaign worked eagerly to benefit from a Russian intelligence operation that hacked his opponents’ emails and echoed them in phony social media campaigns, an effort the U.S. government later concluded was aimed in part at helping to deliver Trump the presidency. And investigators charged that a succession of top aides then lied to pretend they hadn’t.”

House Intel Committee ranking member Devin Nunes reacted on Twitter to the report summary with, “The Russia investigation was based on false pretenses, false intel, and false media reports. House Intel found a yr ago there was no evidence of collusion, and Democrats who falsely claim to have such evidence have needlessly provoked a terrible, more than two-year-long crisis.”

Nunes has also said that media outlets which advanced the false “collusion” narrative should be brought to account.

Attorney General Barr’s letter raises as many questions as it answers. The fact that Special Counsel Mueller’s report does not exonerate the president on a charge as serious as obstruction of justice demonstrates how urgent it is that the full report and underlying documentation be made public without any further delay.

Given Mr. Barr’s public record of bias against the Special Counsel’s inquiry, he is not a neutral observer and is not in a position to make objective determinations about the report.

The statement raises questions, as during Barr’s confirmation hearings in January, he expressed support for the Mueller investigation to its natural conclusion and further said he has been “friends” with Mueller for decades.

From the beginning of the Mueller probe, which was from the FBI after Comey’s firing, Trump has claimed it to be “a witch hunt.”  In a statement Sunday to reporters at the Palm Beach International Airport prior to returning to Washington from a weekend away, Trump said, “This was an illegal takedown that failed and, hopefully, somebody’s going to be looking at the other side.”

An unanswered question is what “evidence” the FBI said it had, in the persons of former FBI counsel Lisa Page and deputy counterintelligence chief Peter Strzok and perhaps others, to open the Trump-Russia “collusion” investigation in the first place.  During their testimony to congressional committees last year, both testified that their decisions were based on evidence they could not divulge because of the ongoing special counsel investigation, at the prompting of present FBI counsel.

It is now known that a compilation of unverified narratives known as the Russia “dossier” was circulated to the FBI, Justice Department, State Department, and the U.S. intelligence community, with portions leaked to the media in the months before the 2016 presidential election. Additionally, the dossier was presented to the FISA court as the core evidence to obtain four successive surveillance warrants on then-Trump informal campaign advisor Carter Page.

Early Sunday evening by telephone with Fox News, Nunes said that the FBI launched its counterintelligence probe into the Trump campaign in “late 2015,” not July 31, 1016, as the FBI has claimed, and that the individuals involved should be the subjects of new DOJ investigations.

The DOJ’s inspector general, Michael Horowitz, continues to investigate FBI leaks to the media and other matters concerning the FBI and DOJ, Axios and other outlets have reported.