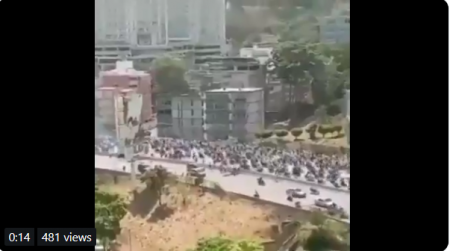 (Apr. 30, 2019) — “Good evening, ladies and gentlemen, and welcome to another interview of the best-selling author of psychiatry textbooks and our friend, Professor Zorkophsky. Hello, my name is Roving and I’m your host for ‘The Pulse of the Nation,’ the one show that isn’t afraid of telling it as it is, such as betting that the chances of Joe Biden ever telling the truth is nine steps beyond zero. Here, I’ll give you an example. The other day Bidden asked the audience if they were better off for having the tax cuts, for having more take-home pay, for Wall Street doing well — which translates directly in all of our 401Ks doing well — heck, the whole economy is doing well and here’s Joe Biden telling the audience that it’s doomsday; it’s the day of the stock market crash of 1929; it’s almost – as close as possible — like the day the asteroid took out the dinosaurs 65 million years ago. Not buying what you’re selling, Joe; not buying the hot air and the lies. Oh, I’m sorry, I got distracted. With me here, in his really neat office, is Professor Zorkophsky. Welcome to the show, Professor.”

“Thank you, Roving, it’s always a pleasure and honor to be on ‘Pulse,’ and from what my publisher tells me, hawking my books on your show generates a 15% sales increase. Here, let me take you on a tour of some of the changes I’ve made since you were last here. Oh, and by the way, please call me ‘Zork’; there’s no need to be so formal in my relaxing office. Now if you will follow me, I’ll show you the relocated helicopter pads – really freed-up the golf course on the roof — that are now just outside the picture window.”

“Look, I’d love to see the changes but we’re a little pressed for time…”

“Oh, okay, I’ll show you the go-kart track next time, but before we start to push my new book, ‘By Any Other Name: At Least Call it the Enemy,’ I want to make a comment about the Democrats, if I may.”

“If the Democrats would grow up and act mature; act as if they have a sense of responsibility and patriotism and stop this Trump Witch Hunt; stop this Socialism nonsense when we all know that Socialism is the stepping stone to Despotism; if the Democrats would get on board and stop this blatant outright waste of time and pool our resources, maybe, just maybe, we could work together and actually solve some very serious problems. And one more thing: saying there isn’t a problem as an excuse for not confronting the problem is a real problem:  am I clear?”

“Crystal clear. So who do you think will give Trump a run for his money, no pun intended. Oh, sorry, but we’ve got to break for a commercial.”

“Now? And none taken. Look, one more thing: the failure of Affirmative Action is never so evident as in Kimberly Foxx, the DA of Chicago; a sad case if I ever saw one: surely a case of ‘misuse of office.’ Now, about my book.”

“Is there anything about Elizabeth Warren in it?”

“I wouldn’t soil my computer, sorry. Now, about my book.”

“Is there anything about Muslims killing everyone else in it?”

“Is there anything about Obama being a fraud*?”

“I’m sorry, but getting back to Elizabeth Warren. When I was putting myself through college, I worked a number of different jobs, from selling burglar alarms to working construction. Anyway, one time on a construction site one of the new guys I was working with was called into the office and fired for lying on his application: it seems that he had a DUI and didn’t check the box. So if a lowly construction laborer was fired for lying, how is it that an employee of an esteemed institution doesn’t have the same standards?”

“Lots of sadness going around, isn’t there? And the saddest part about it is that’s it’s all entirely avoidable. Now, about my book…”

“One more quick question before we talk about your book: there’s 25,000 Cuban troops in Venezuela; they’re armed and the Venezuelan people are not, thanks to taking their guns away, something that Hitler did and something that our Democrats are trying to do to us. Any comment?”

“Socialism cannot survive with an armed populace, and that’s the truth. Now, about my book, in Chapter 7…”

“Excuse me, for the very last time, but the Democrats are desperate, so desperate that they have to make our firefighters look like total imbeciles, total idiots, mentally deficient and not able to tell the difference between a total falsehood and an outright lie.”

“As I said, there’s a lot of sadness in the world and to ruin the reputations of our firefighters is really a low point, even for the Democrats but not, quite obviously, for Biden. Now, about my book.”

“I’m sorry to rush you, but can you just knock it down in one sentence? We’re a little pressed for time.”

“Okay, will do: Islam is the enemy, and this talk about Jihad and radical this and that is just nonsense. The enemy is Islam, the enemy of Western Civilization; the enemy of women’s rights; and the enemy of free speech.

“Thank you and now, on behalf of the crew, I’ll be wishing you all a goodnight: Goodnight.

“Good show, Zork. What do you think the chances are that we have a carrier parked just over the horizon from Venezuela? Burger time: my treat.”

[*Obama being a fraud: WHERE’S THE BIRTH CERTIFICATE?]