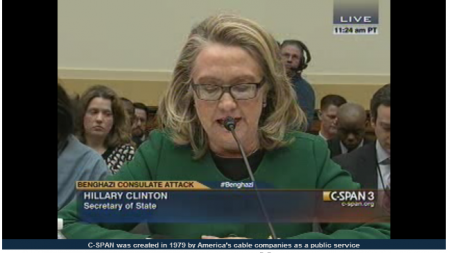 (Apr. 29, 2019) — During a January 23, 2013, Senate Foreign Relations Committee hearing Hillary Clinton was questioned about the September 11, 2012 bombing of the U.S. Consulate in Benghazi, Libya. The Benghazi anniversary attack occurred while Clinton was Obama’s Secretary of State during the final months of Romney’s presidential bid to unseat Obama and just two months before the November presidential elections.

The Senate Foreign Relations Committee was conducting a review of the Benghazi attack that killed four Americans including U.S. Ambassador J. Chris Stevens. During questioning by Senator Ron Johnson (R-WI), Hillary Clinton famously said, “At this point what difference does it make?” Let’s find out.

The transcript of the hearing recorded on C-SPAN shows Sen. Johnson repeatedly asking Clinton about the story coming out of Obama’s White House that the Benghazi attack was a response to protests outside the Consulate and an anti-Islam video posted on YouTube.

Clinton: With all due respect (5:16 on C-SPAN tape), the fact is we had four dead Americans. Was it because of a protest or was it because of guys out for a walk one night who decided that they’d they go kill some Americans? What difference at this point does it make? It is our job to figure out what happened and do everything we can to prevent it from ever happening again, Senator. Now, honestly, I will do my best to answer your questions about this, but the fact is that people were trying in real time to get to the best information. The IC (intelligence community) has a process, I understand, going with the other committees to explain how these talking points came out. But you know, to be clear, it is, from my perspective, less important today looking backwards as to why these militants decided they did it than to find them and bring them to justice, and then maybe we’ll figure out what was going on in the meantime.

On May 18, 2015 Judicial Watch published a stunning report that the Department of Defense and Department of State documents clearly showed that the Obama administration knew that Al-Qaeda terrorists had planned the Benghazi attack 10 days in advance.

Filmmaker Nakoula Bassely Nakoula, an Egyptian-born Coptic Christian, posted a short anti-Islam video, “Innocence of Muslims,” on YouTube. His video was falsely blamed for the Benghazi attack and used deceitfully by Obama and his administration to dupe the American people and hide their own culpability. Nakoula was shamed, incarcerated, and threatened with death by Obama’s White House. He now lives in a homeless shelter in California.

More lies. Wikipedia continues to disingenuously maintain that Nakoula’s film sparked the Benghazi attack. The section on “Arrest and imprisonment” begins with, “Following the violent reactions to the video . . .” The section concludes with one interesting fact verified by Reuters – that on November 28, 2012, two days before the Muslim-Brotherhood government of Obama-favored Mohamed al-Morsi was ousted, an Egyptian court sentenced Nakoula to death in absentia for defaming Islam.

That brings us to the Muslim-Brotherhood connection to the attack on Benghazi.

The stunning Judicial Watch report was published on 5.18.15 – four years ago. Its revelations were jaw-dropping then but even more relevant now as the dots connecting Obama to Hillary’s private email server and Benghazi are also connecting Obama and Hillary to the Muslim Brotherhood and the unlawful FISA warrants used to spy on Donald Trump.

From the Judicial Watch report:

“A Defense Department document from the Defense Intelligence Agency (DIA), dated September 12, 2012, the day after the Benghazi attack, details that the attack on the compound had been carefully planned by the BOCAR terrorist group ‘to kill as many Americans as possible.’ The document was sent to then Secretary of State Hillary Clinton, then-Defense Secretary Leon Panetta, the Joint Chiefs of Staff and the Obama White House National Security Council. The heavily redacted Defense Department ‘information report’ says that the attack on the Benghazi facility ‘was planned and executed by The Brigades of the Captive Omar Abdul Rahman (BCOAR).’ The group subscribes to ‘Al-Queda ideologies.’”

In this Defense Department document Abdul Baset, known as AZUZ, the leader of BOCAR, is blamed for the attack on Benghazi – NOT Nakoula Bassely Nakoula.

Further, from a separate Judicial Watch lawsuit, the State Department produced a different document created the morning after the Benghazi attack by Hillary Clinton’s offices that made no mention of videos or demonstrations, “Four COM personnel were killed and three wounded in an attack by dozens of fighters on the U.S. Diplomatic Mission in Benghazi beginning approximately 1550 Eastern Time . . .”

“If the American people had known the truth – that Barack Obama, Hillary Clinton, and other top administration officials knew that the Benghazi attack was an al-Qaeda terrorist attack from the get-go – and yet lied and covered up this fact – Mitt Romney might very well be president. And why would the Obama administration continue to support the Muslim Brotherhood even after it knew it was tied to the Benghazi terrorist attack and to al-Qaeda? . . . These documents show that the Benghazi cover-up has continued for years and is only unraveling through our independent lawsuits. The Benghazi scandal just got a whole lot worse for Barack Obama and Hillary Clinton.”

Hillary’s Benghazi lies and cover-up protected Obama’s 2012 presidential candidacy and made her Obama’s legacy candidate for 2016. Obama’s lies and cover-up protected Hillary’s presidential bid and his own political malfeasance and ideological connection to the Muslim Brotherhood. Hillary’s private email server was an off-the-books carrier of classified information that protected Hillary, Obama, Rice, and every other Obama administration official implicated in the Benghazi attack and its cover-up including the aftermath of securing FISA warrants through unverified foreign intelligence sources to spy on the the Trump campaign.

Tony Shaffer, former senior intelligence officer in the U.S. Army, explains the unprecedented corruption and shocking abuse of FISA by Obama’s FBI to spy on the Trump campaign in a stunning interview with Jan Jekielek from American Thought Leaders. Tony Shaffer describes what was done by the Obama administration but the question remains – WHY?

Journalist Joan Swirsky provides the answer. In her stunning 4.23.19 article, “Prison, anyone?” she identifies the nine words uttered by then-Candidate Trump during a campaign debate that launched the shocking coup attempt against a sitting president of the United States. “If I were president, Hillary would be in jail.” These nine words are the key to everything – they unlock the Benghazi cover-up, the FISA abuses, Spygate, Russiagate, the partisan Mueller investigation, and the ongoing hysterical screams by Democrats to impeach President Trump.

When the unthinkable happened and Candidate Trump was elected president, the Strzok/Page insurance policy was launched to overthrow President Trump because if Hillary goes to jail so do Obama and his collaborators – the entire house of cards collapses and the enormity of the coup attempt against sitting President Trump is explained and exposed.

Linda Goudsmit is a devoted wife to husband Rob and they are the parents of four children and the grandparents of four. She and Rob owned and operated a girls clothing store in Michigan for 40 years and retired in 2013 to the beaches of sunny Florida. A graduate of the University of Michigan in Ann Arbor, Linda has a lifelong commitment to learning and is an avid reader and observer of life. She is the author of the philosophy book​ ​Dear America: Who’s Driving the Bus? as well as a children’s series, Mimi’s STRATEGY. It is with pride and humility that she is sharing her thoughts, observations, and philosophy of behavior in the many articles she has written that are featured on this website.

Madame Secretary, “At this point it makes a very big difference.” added on Monday, April 29, 2019

One Response to "Madame Secretary, “At this point it makes a very big difference.”"