WHAT:            Mayor Ganim will join Bridgeport’s Mayor’s Initiative for Reentry Affairs (MIRA) and Career Resources, Inc. to kick off a job fair inviting people who were formerly incarcerated and seeking employment. There are 30 companies who will be participating in this year’s jobs fair and 300 registered job seekers are expected to attend. Job seekers are asked to bring copies of resumes and dress to impress. 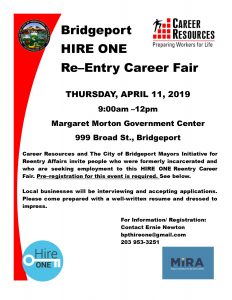