IS THE JOB “OVERWHELMING?” 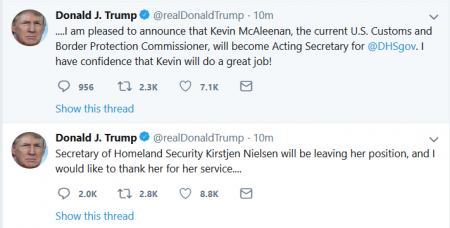 Late last year, The Wall Street Journal reported that Trump was seeking to replace Nielsen, although a spokesman for DHS denied she was seeking other opportunities.

Border protection was a hallmark of Trump’s 2016 campaign.  Last week, he threatened to close the U.S.-Mexico border given the reported unprecedented numbers of illegal aliens seeking entry since October.  Trump believes that faulty and loosely-enforced U.S. immigration laws have caused thousands of “migrants” to attempt the treacherous journey from Central America to claim political asylum and has implored Congress to address weaknesses he sees in the current system.

Democrats and Republicans have not been able to agree on whether or not a wall or barrier should be built or reinforced at the southern border.  Between December 22 and January 25, the federal government was partially closed after funding for the agencies and departments lapsed, the main obstacle in appropriation discussions having been Trump’s requested $5.7 billion for a border wall.

On Saturday evening, Trump completed a trip to southern California, where he met with Border Patrol supervisors and unexpectedly praised Mexico for its reported cooperation over “four days.” That evening, Trump again called on Congress “to end the horrible, costly and foolish loopholes in our Immigration Laws.” 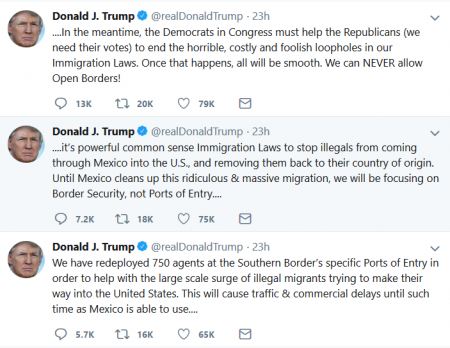 “Once that happens, all will be smooth. We can NEVER allow Open Borders!” Trump added.  He then reverted to chiding Mexico for failing to do enough to stem the flow of “caravans” passing through that country unimpeded, at times numbering in the thousands.

In early March, McAleenan testified to the Senate Judiciary Committee while Nielsen appeared at the same time in front of the House Homeland Security Committee to answer questions.

Democrats and Republicans are divided over whether or not a “national emergency” exists at the border and throughout the country given the numbers of illegal aliens who CBP supervisors say are entering in “overwhelming” numbers.  On February 15, Trump officially declared the situation a national emergency to access funds from various government agencies to fund a border wall, an action 20 states challenged in court on Friday.