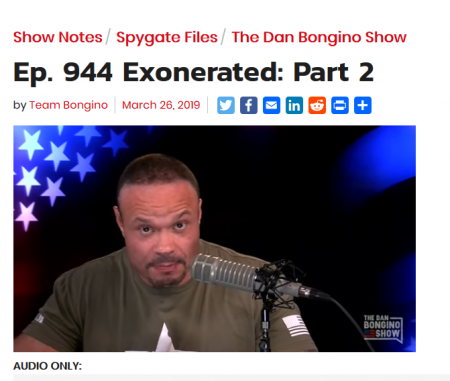 During the one-hour podcast, Bongino presented several theories as to why, among other items, Graham suggested during the solo press conference that former Attorney General Loretta Lynch rendered herself “so unable to preside over the Clinton investigation.”

Graham was referring to Lynch’s announced decision on July 1, 2016 that she would accept the findings of the FBI as to whether or not Hillary Clinton should be prosecuted for mishandling classified information on her private, unauthorized server while she was Obama’s secretary of state.

Four days later, then-FBI Director James Comey gave his own solo press conference in which he enumerated a litany of Clinton’s transgressions, yet concluded by stating that “no reasonable prosecutor would bring such a case” to the Justice Department for consideration of criminal charges.

“Was it the tarmac meeting, or was it more?” Graham completed his thought, invoking a June 28, 2016 meeting on the tarmac at Sky Harbor International Airport in Phoenix between Lynch and former President Bill Clinton in which she claimed the two discussed “grandchildren” and “golf” while Clinton’s wife was knowingly under investigation for her use of the private email server.