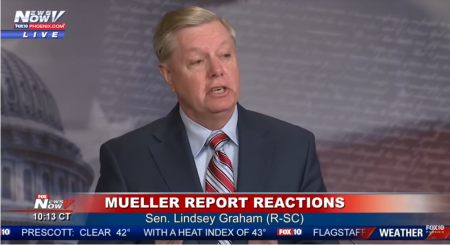 (Mar. 25, 2019) — At 11:00 a.m. EDT, Senate Judiciary Committee Chairman Lindsey Graham gave a 30-minute solo press conference in response to the release of a summary of Special Counsel Robert Mueller’s investigation of alleged Trump-Russia “collusion” and Russian interference in the 2016 election.

The four-page summary, written by Attorney General William Barr on Sunday, stated that Mueller found no evidence of collusion between anyone in the Trump campaign and Russia.  On the allegation of “obstruction of justice” on Trump’s part, Barr wrote, Mueller made no finding, deferring to the Justice Department.

Subsequently, Barr wrote in the letter, he and Deputy Attorney General Rod Rosenstein determined that the evidence does not justify a prosecution.

The letter was delivered Sunday afernoon to Graham; his committee’s ranking member, Sen. Dianne Feinstein; and the chairman and ranking member of the House Judiciary Committee.

At the outset, Graham said he had a 12:00 noon phone appointment with Barr.

During his remarks, Graham affirmed that Mueller found, as has been reported previously, that Russians penetrated the DNC servers prior to the presidential election.  In 2016, thousands of DNC emails were provided to WikiLeaks, which began releasing them that July.  “It was the Russians; it wasn’t some 330-pound guy sitting on a bed somewhere,” Graham said.

Over the weekend WikiLeaks tweeted that Mueller never contacted the organization about where it might have obtained the emails, although founder Julian Assange has previously said that no “state party” provided them.

Graham said he wants as much of Mueller’s report released as possible given mandatory confidentiality of grand-jury testimony and possible classified information. He also said that since 2017, he has wanted to “get the other side of the story.” (4:56)

Graham expressed what he believes to be a double standard in regard to the Trump “dossier” compiled by British citizen Christopher Steele which was used to obtain for successive FISA warrants on then-Trump campaign associate Carter Page. “I’m going to get answers to this,” Graham said.  “If no one else cares, it seems to be Republicans do, and that said, cause if the shoe were on the other foot, it would be  front-page news all over the world.  The double standard here has been striking and quite frankly, disappointing.  I am 100% convinced that if the Republican Party had hired Mr. Steele to go to Russia and investigate Clinton, and the report was prepared and given to the Department of Justice and used to get a warrant against a Clinton associate and the underlying information in the dossier proved to be garbage, everybody in the world would have it on the front page and there would be endless chatter on the cable networks.”

“The rule of law applies both to Republicans and Democrats,” Graham continued, pivoting to his request to Barr to appoint a new special counsel to look into the “shady behavior” of FBI and DOJ officials in obtaining the Carter Page surveillance warrants.  He said he wants to know if the FBI’s counterintelligence investigation into the Trump campaign was “a ruse.”

He questioned why former Attorney General Loretta Lynch did not issue the final decision, as then-FBI Director James Comey did on July 5, 2016, on whether or not Hillary Clinton would be recommended for prosecution for mishandling classified information on a private, unauthorized server while she served as Obama’s secretary of state.

Graham said he believes that in regard to “the FISA warrant, the Clinton campaign, the counterintelligence investigation, it’s pretty-much been swept under the rug except by a few Republicans in the House. Those days are over.” (10:55)

After that statement, Graham took questions from the press.