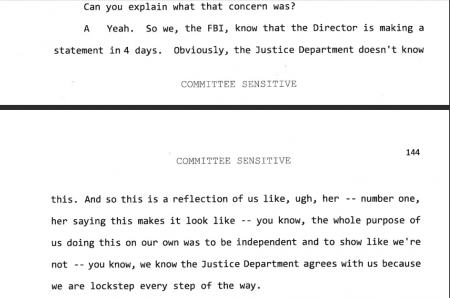 (Mar. 19, 2019) — Beginning on page 143 of the first transcript of former FBI Counsel Lisa Page’s private testimony to the House Judiciary Committee last July, a questioner for the minority, at that time the Democrats, asked Page about a text message sent to her by former colleague Deputy Assistant Director of Counterintelligence Peter Strzok which referenced “choreography.”

Page and Strzok served on the investigation known as “Mid-Year Exam” into Democrat presidential candidate Hillary Clinton’s use of a private, unauthorized email server while she was Secretary of State under Barack Obama between 2009 and early 2013. Both FBI employees later participated in “Crossfire Hurricane,” the counterintelligence probe launched in 2016 into the Trump campaign on the allegation that someone within the organization was “colluding” with Russian operatives to affect the outcome of the election.

In thousands of texts unearthed by a DOJ Inspector General investigation into the conduct of Justice Department and FBI officials in 2016, Page and Strzok were found to have expressed a deep dislike of Trump. In one text, Strzok assured Page that Trump would not be elected president, stating, “We’ll stop it.”

Many observers interpreted that text to mean, along with others, that Strzok and/or Page were planning some type of action which might have interfered with the electoral process. Both have denied that claim.

“Mr. Strzok and you in this exchange both expressed displeasure about the timing of this announcement,” the questioner, Ms. Kim, said to Page on July 13, 2018. “So he wrote, two texts down from the one that I just referred to, he said: ‘Timing looks like he**. Will appear choreographed.’ Can you explain what that concern was?”

The “announcement” referred to a statement then-Attorney General Loretta Lynch made on July 1, 2016, that “she plans to accept investigators’ final recommendations” on MYE.  As Page previously testified and major media reported at the time, Lynch nevertheless did not officially “recuse” herself from the joint FBI/DOJ probe.

NBC News characterized the MYE investigation, begun in 2015, as “FBI-led.”

Lynch made her statement four days after it was revealed that she met privately with Hillary Clinton’s husband, former President Bill Clinton, on the tarmac of a Phoenix airport, where the two spoke for “close to an hour.”  Emails obtained by both Judicial Watch and the American Center for Law & Justice (ACLJ) through FOIA requests demonstrated that the DOJ and certain FBI agents appeared to be more irritated that the meeting was leaked to the press than its impropriety.

The emails also revealed that Lynch was informed of the “talking points” her DOJ colleagues were formulating after word of the meeting was leaked and reported by Fox News and, to a lesser degree, CBS. In those communications, Lynch was using the alias of “Elizabeth Carlisle.”

In response to Kim, Page said, “Yeah. So we, the FBI, know that the Director is making a statement in four days. Obviously, the Justice Department doesn’t know this…”

On July 1, 2016, Clinton had not yet been interviewed as part of the MYE investigation. The IG report completed last June revealed that Comey, assisted by Strzok and others at the FBI, had already decided that he would not recommend Clinton for criminal prosecution.

Comey’s former chief counsel, James Baker, testified last fall that he initially believed Clinton should be referred for prosecution but was dissuaded by Comey and other colleagues from pursuing it.

Page was referring to the solo press conference then-FBI Director James Comey gave on July 5, 2016, faulting Clinton for being “extremely careless” in her handling of classified information but declining to recommend her or anyone in her circle to the DOJ for criminal prosecution.

In earlier portions of the Page transcript, Page justified Comey’s decision and asserted that the FBI did a thorough and unbiased investigation. In his June 27, 2018 deposition to the same congressional committee, Strzok said the same.

When Clinton was interviewed over the weekend of July 2 and 3, 2016, she was reportedly not recorded or placed under oath, and two individuals considered material witnesses to the use of the private server, Heather Samuelson and Cheryl Mills, were allowed to represent her in their capacities as attorneys.

Strzok was reported to have been one of two FBI agents who interviewed Clinton; he was also a key investigator in Crossfire Hurricane, later transferred to Special Counsel Robert Mueller after Comey was fired.

Continuing her answer to Kim, Page said, in regard to the Justice Department and FBI, “And so this is a reflection of us like, ugh, her — number one, her saying this makes it look like — you know, the whole purpose of us doing this on our own was to be independent and to show like we’re not — you know, we know the Justice Department agrees with us because we are lockstep every step of the way” (p. 144).

While the IG report found that political considerations did not impact the ultimate decision not to refer Clinton for criminal prosecution, it did fault Page and Strzok for their politically-charged messages exchanged on government-issued devices and referred both for additional investigation to the DOJ’s Office of Professional Responsibility (OPR).

By the time the report was issued in mid-June, Page had already resigned, and Strzok had been demoted for nearly a year to the FBI’s human resources department. He was fired on August 10, 2018 after 22 years of service.