“IT WAS JUST AN OMISSION” 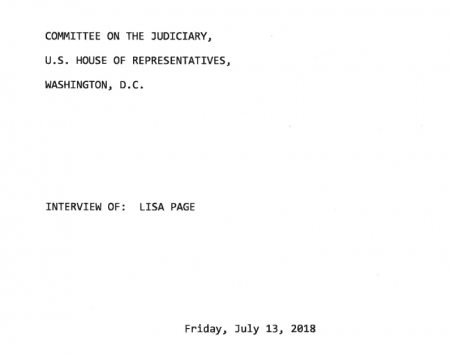 Last July, Page testified to the House Oversight & Government Reform Committee and Judiciary Committee on Friday, July 13 and July 16, respectively.  Both were led by Republicans at the time.

Page was found to have exchanged thousands of politically-charged text messages with then-FBI counterintelligence second-in-command Peter Strzok; both were cited as having displayed questionable conduct in an inspector general’s report last year.  One of the exchanges discussed an “insurance policy” to be hypothetically invoked if Donald Trump were to win the presidency.

Page resigned from her post last May, while Strzok was fired in August.  In the early part of her July 13 interview, she said she was a prosecutor before joining the FBI, where she acted as counsel to then-Deputy Director Andrew McCabe, who for a short time was Acting Director.

On July 13, when Oversight Committee then-Chairman Trey Gowdy questioned Page about “potential fact witnesses” having been present when Clinton was questioned by the FBI on July 2, 2016, Page responded that “We all at the FBI disagreed with it.”

Page claimed that pressure from the Justice Department changed the FBI’s customary interview procedure by including Justice individuals and allowing two of Clinton’s closest aides, Cheryl Mills and Heather Samuelson, to be present during the July 2 interview. 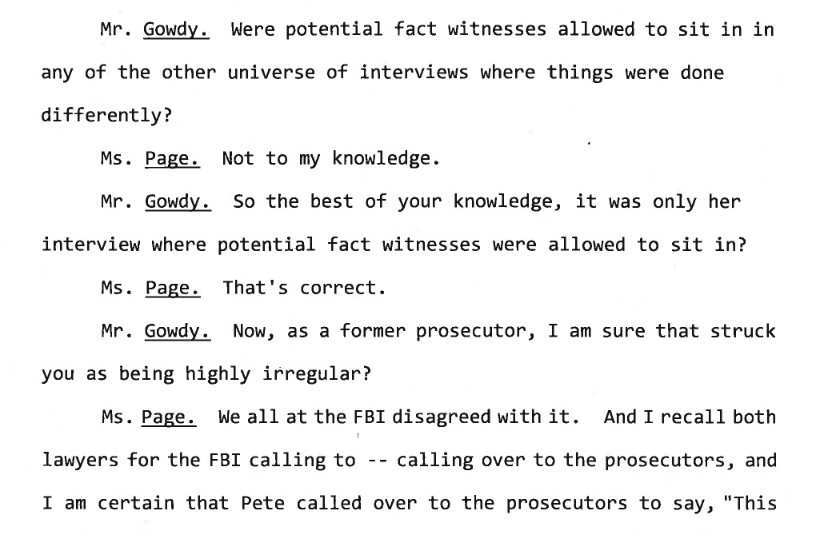 At issue was whether or not Clinton had violated federal law by sending classified information over the private, unauthorized server set up in the basement of her Chappaqua, NY home which circumvented routine capture by governmental computer systems.

As was reported by the major media, Page confirmed (p. 19) that then-Attorney General Loretta Lynch, who was compromised after holding an informal face-to-face meeting with Bill Clinton days before Hillary Clinton’s interview, did not actually recuse herself from the Clinton probe, known as “Mid-Year Exam.”

On page 22, however, Page said that “the team” of FBI and DOJ officials handling MYE concluded before July 2 that “there would not be a prosecutable case” against Hillary Clinton based on what they considered to be a lack of “intent to mishandle classified information” (p. 24).

Page described herself as “not formally on the team” investigating Clinton (p. 24).

Interspersed with Page’s testimony about MYE, Gowdy asked her about a number of texts she exchanged with Strzok, with whom she was reportedly romantically involved.  When Gowdy asked Page the meaning of a text she reportedly sent to Strzok which said, “Trump is a loathsome human,” she responded, “I don’t recall” (p. 25).

The text referring to the “insurance policy” was raised by Gowdy on page 35, with Page stating that Strzok composed the text and sent it to her on August 15, 2016.  Page testified that at the time, she was speculating that “he’s (Trump) not going to be elected,” thereby negating the need for investigators to “go at a total breakneck speed” to discover whether or not anyone from the Trump campaign was “colluding” with Russians (p. 38).

Beginning on page 39, there are redactions in both Page’s responses and Gowdy’s questions about dates and locations of “witness interviews” between the date the counterintelligence probe allegedly began, July 31, 2016, and August 15 of that year.

From time to time, a “Mr. Bessee” of the FBI advised Page not to respond to certain questions with the explanation that “All of that still impacts the special counsel…” (p. 42).  On the same page, Bessee indicated that the FBI was “given guidance by the special counsel.” 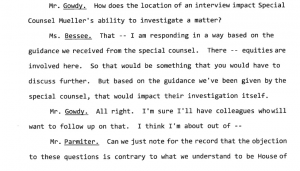 On pages 49-50, Page told Rep. Sheila Jackson-Lee that the FBI had to weigh in importance the Clinton’s possible mishandling of classified information “3 years prior” against the perceived “incredible threat to national security” presented by a Russian infiltrator into the Trump campaign.

Page confirmed to Jackson-Lee that she “was one of the members in the room” when a draft findings memorandum as to Clinton was discussed with Comey in May 2016, approximately two months before she was interviewed.  The inspector general’s report, released in June last year, demonstrated that Comey, with advice from Strzok, had massaged the wording of the memo from a reference to “gross negligence,” a term included in a federal statute with regard to classified information, to “extremely careless,” a term Comey used on July 5, 2016 during an unprecedented solo press conference wherein he announced that “no reasonable prosecutor would bring such a case.”

On page 52, Page claimed that rather than “changing” the language of the memorandum, “we removed the gross negligence language.” [sic]  “And so it looks like it was essentially a substitution, but, really, it was just an omission of the word gross negligence because we thought it would be confusing…” 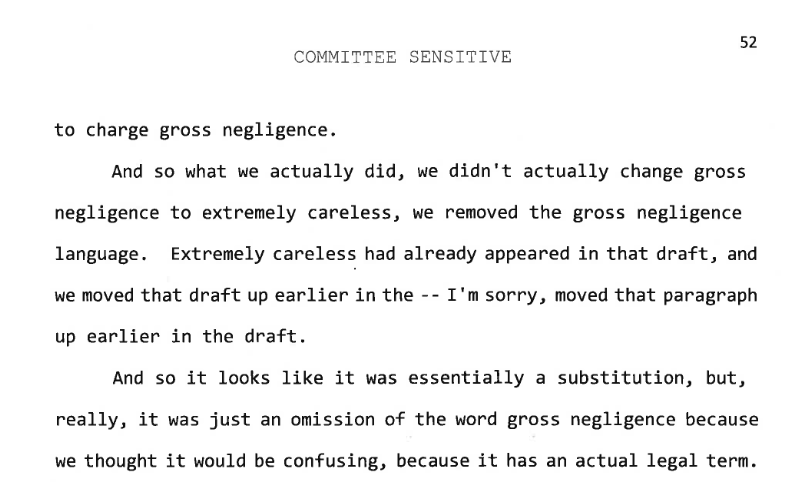