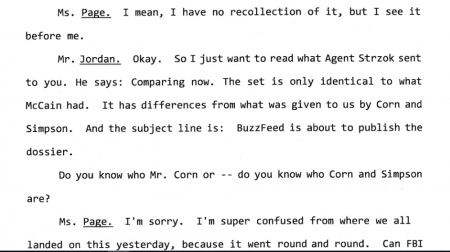 (Mar. 18, 2019) — On page 125 of the first section of the transcript from July 13, 2018 closed-door testimony former FBI Counsel Lisa Page provided to the House Judiciary Committee, Rep. Jim Jordan (R-OH4) questioned Page about the FBI’s acquisition of the now-infamous Trump-Russia “dossier” which was used to obtain surveillance warrants on a former Trump campaign advisor.

Like dandelions in an untreated lawn, the now infamous Russian dossier apparently multiplied in numbers — and emissaries delivering it to the FBI — the closer Donald Trump got to the White House.

We know from public testimony that dossier author and former British intelligence agent Christopher Steele shared his findings with the FBI in summer and fall 2016 before he was terminated as a confidential source for inappropriate media contacts.

And we learned that Sen. John McCain (R-Ariz.) provided a copy to the FBI after the November 2016 election — out of a sense of duty, his office says.

As Solomon reported on February 20, there were actually as many as a half-dozen versions of the dossier fed to the FBI from various sources, one of whom was identified by Jordan as having been a staffer for then-Senator John McCain.

The staffer has been identified as David Kramer, whose videotaped testimony in a court case is memorialized in a transcript released late last week. The lawsuit, Aleksej Gubarev, et al v. BuzzFeed, Inc., et al was dismissed in December in BuzzFeed’s favor, although Gubarev immediately said he planned to appeal, Buzzfeed reported.

For several years, Lisa Page was employed at the FBI as Counsel to the Deputy Director, most recently in the person of now-fired Andrew McCabe. Page resigned from the agency last May. During an investigation of Hillary Clinton’s use of a private email server and the Trump-Russia “collusion” probe, Page was professionally and romantically involved with former FBI Deputy Assistant Director of Counterintelligence Peter Strzok, who is mentioned in the exchange between Page and Jordan.

In recent days, Rep. Doug Collins, ranking member on the House Judiciary Committee, released both the Page transcripts and that of Strzok’s June 27, 2018 private testimony.   More transcripts will be released in the near future, Collins told “Sunday Morning Futures” host Maria Bartiromo on March 17, 2019.

Page and Strzok were found by the Justice Department’s Inspector General to have exchanged thousands of politically-tinged text messages which led to Strzok’s termination from the investigative team led by Special Counsel Robert Mueller.  Mueller was brought in to complete the FBI’s investigation into whether or not anyone in the Trump campaign coordinated with Russian operatives to gain an advantage in the 2016 presidential election.

Mueller has also been scrutinizing the extent to which Russia or Russian nationals interfered in the U.S. election process that year.

As per Strzok’s own testimony, when Mueller spoke to him about the discovery of the texts and the appearance of political bias they might have demonstrated, Mueller did not inquire of Strzok as to whether or not political considerations, in Strzok’s view, influenced his handling of matters pertaining to the Trump-Russia probe.

However, Strzok repeatedly denied to members of Congress that his motivation or actions were governed by any political considerations. As The Post & Email has reported, Strzok is said to have been the individual who “drafted” and signed the “EC,” or electronic communication, which galvanized the launch of the Trump-Russia investigation.

Through page 177 of the Strzok transcript, the former high-ranking counterintelligence agent does not state the evidence the FBI possessed which initiated the Russian collusion investigation. On several occasions, former House Intelligence Committee Chairman Devin Nunes has said that there was “no intelligence” in the EC, which he was allowed to view nearly a year ago.

It is believed that Mueller is finishing his work and that a report is forthcoming within the next two weeks, according to Bartiromo yesterday.

For his part, Trump has claimed that no one on his campaign collaborated with Russia or anyone else and that the entire Mueller probe has been “a witch hunt.”

Through page 177 of the Strzok transcript, the former high-ranking counterintelligence agent does not state the evidence the FBI possessed which initiated the Russia collusion investigation. On several occasions, former House Intelligence Committee Chairman Devin Nunes has said that there was “no intelligence” in the EC, which he was allowed to view nearly a year ago.

On page 125 of the Page transcript, Jordan asked Page about a text message Strzok sent her on January 10, 2017, ten days before Trump’s inauguration. Presenting it in hard copy for her reference, Jordan then read the contents of the text as, “Comparing now. The set is only identical to what McCain had. It has differences from what was given to us by Corn and Simpson. And the subject line is: Buzzfeed is about to publish the dossier.”

David Corn is the Washington bureau chief for Mother Jones, while Glenn Simpson is co-founder of Fusion GPS, which commissioned the compilation of the dossier through former British intelligence agent Christopher Steele.  Fusion was paid for its work by Perkins Coie, a mega-law firm commissioned by the DNC and Clinton campaign to pay for opposition research on Trump.

The dossier, or at least one version of it, was published by Buzzfeed the same day as the Strzok-Page text which Jordan read, with the outlet admitting that the claims made therein were unverified.  Its publication generated the Gubarev lawsuit.

The day before Page’s first day of testimony last summer, Strzok testified publicly, hence Jordan’s reference on pp. 125-126 of “Can you tell me, because I didn’t quite get this square yesterday.”  Jordan continued, “It looks to me like in this particular email that there are a couple versions of the dossier, at least parts of the dossier. There’s the set that BuzzFeed is about to publish which, according to Mr. Strzok’s email, is identical to what was given to the FBI by Mr. McCain, Mr. McCain staff — Senator McCain staff, I should say. And then there’s this other one that you’re getting from David Corn and Glenn Simpson, which is the dossier, but different. Is that how you read it?”

Page responded, “I think so, but honestly, I didn’t have a ton to do with it, so I don’t — that seems right to me, but I really don’t know, because I wasn’t really substantively involved with this.”

After Jordan asked her, “Have you read the dossier?” Page replied, “…I guess I just want to clarify. I know that the press has called the sort of set of reporting that — that was released on Buzzfeed and other outlets the dossier. What we have are a set of reports from a source, obviously now well-known.”

In her next response to Jordan, Page revealed the source as Steele, who has been said to have expressed strong anti-Trump sentiments prior to the 2016 U.S. election.

According to the newly-released Kramer transcript, Kramer admitted to providing the dossier, which he said he received from Steele, to CNN and The Washington Post in addition to BuzzFeed.  The document also found its way to the Obama State Department and National Security Council as well as to former FBI Director James Comey.

Much, if not virtually all, of the dossier remains unverified.  In a transcript of Steele’s testimony in the Gubarev lawsuit last year, he admitted to relying on “internet searches” to gather information about Webzilla, one of Gubarev’s companies named in the action.

An associate of the late Arizona Republican Sen. John McCain shared with Buzzfeed News a copy of the unverified, salacious opposition research dossier alleging that Russians had compromising material on President Trump, according to a bombshell federal court filing Wednesday.

McCain had strenuously denied being the source for Buzzfeed after it published the dossier, which was funded by the Democratic National Committee (DNC) and the Hillary Clinton presidential campaign. In recent days, the dossier’s credibility has increasingly come under question, as the Yahoo News investigative reporter who broke news of its existence said many of its claims were “likely false,” and an adviser to ex-Trump lawyer Michael Cohen said Cohen never went to Prague to pay off Russian hackers, as alleged in the dossier.

Newly unsealed court filings show how the late Sen. John McCain, R-Ariz., and an associate shared with the FBI and a host of media outlets the unverified dossier that alleged the Russians had compromising information on now-President Trump.

McCain had denied being the source for BuzzFeed after it published the dossier, which was funded by the Democratic National Committee (DNC) and Hillary Clinton’s presidential campaign, but had acknowledged giving it to the FBI.

Over the weekend, President Trump criticized the late McCain for having Kramer distribute the dossier by quoting a statement made by former Watergate special prosecutor Kenneth Starr in which Starr termed the distribution of the dossier “a very dark stain against John McCain.”  Trump also faulted McCain for having cast the decisive vote in the Senate in 2017 not to allow debate on repealing Obamacare when, in fact, McCain had campaigned on that issue the year before.

McCain’s daughter, Meghan, retorted on Twitter that, “No one will ever love you the way they loved my father.”

At her father’s funeral, without naming him, Meghan McCain aimed politically-charged statements at Trump while Ivanka Trump and her husband, Jared Kushner, sat in one of the front rows.  Trump was not invited to the funeral.  On Monday’s “The View,” which McCain co-hosts, she said of Trump, “He spends his weekend obsessing over great men because he knows it and I know it and all of you know it — he will never be a great man.” https://abcn.ws/2FaZGZV “ 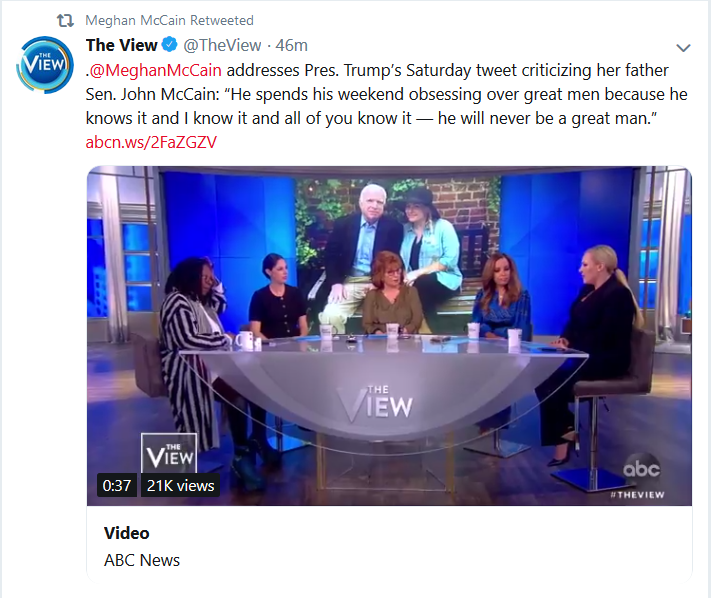 Some consider the use of the unverified dossier to obtain surveillance warrants against then-Trump advisor Carter Page beginning in October 2016 and reported subsequent activity within the Justice Department and FBI to oust Trump from office a “soft coup.”