Did an FBI Agent Communicate with Michael Cohen?

IF SO, WHY? IF NOT, WHERE DID THE QUESTION COME FROM? 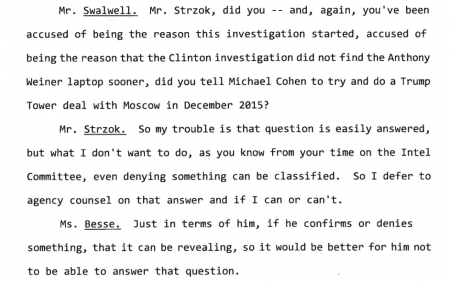 (Mar. 16, 2019) — On page 83 of a 312-page transcript of closed-door testimony to the House Judiciary Committee by former FBI Deputy Assistant Director of Counterintelligence Peter Strzok on June 27, 2018, Strzok was asked whether or not he told “Michael Cohen to try and do a Trump Tower deal with Moscow in December 2015?”

The question was posed by Rep. Eric Swalwell, who identified himself as both a member of the House Judiciary and Intelligence Committees.

Prior to Swalwell’s question, Strzok had been careful to respond to all queries put to him by members of the committee in a way that would protect “FBI equities,” meaning classified information and ongoing investigations.

As with closed-door transcripts released over the last nine days, ranking member of the House Oversight & Reform Committee Doug Collins released Strzok’s testimony on Thursday.  The document can be read here:  https://dougcollins.house.gov/sites/dougcollins.house.gov/files/06.27.18%20Interview%20Of%20Peter%20Strzok.pdf?utm_source=Collins+Judiciary+Press+List&utm_campaign=96979c2884-EMAIL_CAMPAIGN_2019_03_14_11_47&utm_medium=email&utm_term=0_ff92df788e-96979c2884-168882913

In response, Strzok said that while the question was “easily answered” and that “even denying something could be classified,” he would “defer to agency counsel…”

A Mr. Bessee, an attorney for the FBI, agreed with Strzok that “it would be better for him not to be able to answer that question.”

Cohen was Trump’s personal attorney and a Trump Organization executive for more than a decade.  In August, he pleaded “guilty” to eight federal crimes, including lying to Congress about the timeline of the Trump Tower-Moscow project.  In late November, he was sentenced to three years in prison and is scheduled to begin serving on May 6.

In a striking about-face from previous statements about his former boss, Cohen has since called Trump “a racist, a con man, and a cheat” in public testimony on February 27.

Trump has been criticized for allegedly misrepresenting his business dealings with Russia during the campaign.

According to PBS, Cohen and the Russian-born Felix Sater initiated the Trump Tower-Moscow project in late 2015.  Sater, who was an FBI informant and pleaded “guilty” to fraudulent stock activity, was scheduled to testify to Congress on March 14, which was postponed until March 27.

In January, Buzzfeed News reported that Trump instructed Cohen to lie to Congress about the timing of the Trump Tower-Moscow project.  In an unusual move, Special Counsel Robert Mueller’s office made a public statement claiming that the Buzzfeed article was inaccurate.  Nevertheless, it remains online with a note stating, “The office of the special counsel is disputing BuzzFeed News’ report.”

Strzok, who was fired in August, maintained throughout his interviews, including public testimony on July 12, that his “personal beliefs” did not affect his ability to be impartial in his counterintelligence work at the FBI.  Strzok worked on the probe into Hillary Clinton’s use of a private email server, the Trump-Russia “collusion” investigation, and the probe into Russia’s alleged interference in the 2016 election.

Strzok also was selected, although he did not outline the specific procedure initiating it, to serve on Mueller’s investigative team, which assumed the dual Russia probes from the FBI after then-Director James Comey was fired in May 2017.  Strzok was terminated from the Mueller project in August 2017, he testified to the committee, after politically-charged text messages with former FBI attorney Lisa Page were uncovered by the Justice Department’s inspector general.

Both Strzok and Page have admitted to engaging in an extramarital affair during the Clinton and Trump investigations as reflected in the transcripts Collins released.

At the time of the June 2018 interview with the committee, Strzok had been demoted to a post in the FBI’s human resources division and confirmed that he had been stripped of his security clearance until it was temporarily restored for his testimony to members of Congress in June and July.

Did an FBI Agent Communicate with Michael Cohen? added on Saturday, March 16, 2019