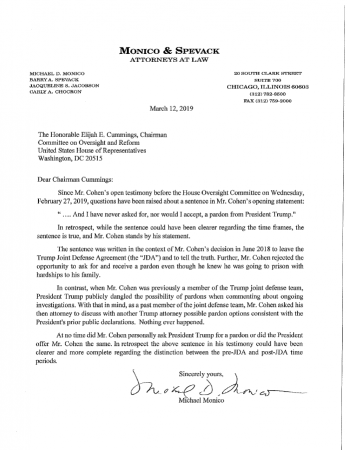 In early April, Michael Cohen’s home, hotel room and office were raided by the FBI in a move which surprised Trump and possibly others and led to his indictment on eight federal crimes.

After pleading “guilty” in August, Cohen was sentenced to three years in prison for bank fraud, tax evasion, and illegal campaign contributions made on behalf of “Individual 1.”

Trump has claimed that payments Cohen made to two women who claimed to have had intimate relations with the former real-estate mogul did not come from campaign funds and therefore were not illegal.

In December Trump said that Cohen agreed to cooperate with prosecutors from the Southern District of New York (SDNY) and Special Counsel Robert Mueller “to embarrass” him and reduce his own prison sentence.

As of early Wednesday afternoon, the letter from Atty. Michael Monico of Monico & Spevak was widely reported by the mainstream media.

When questioned by members of the committee on February 27 as to the individuals who assisted him to prepare for his testimony that day, Cohen responded that a “Michael Monico” was one of them, a surname misspelled by this writer at the time.  Cohen did not amplify as to who “Michael Monico” was.

Cohen further said he met with “the Democrat Party,” and, more specifically, with House Intelligence Committee Chairman Adam Schiff and Oversight Committee Chairman Elijah Cummings, to “discuss topics” which might arise during his sworn testimony.  Schiff denies having met with Cohen to “coach” him.

News reports have since confirmed that members of Schiff’s staff traveled to New York City to meet with Cohen for “more than ten hours” to prepare for his testimony on February 27, 2019.

Cohen’s opening statement that day included the assertion that “I have never asked for, nor would I accept a pardon from President Trump.”  Conversely, on Friday, Trump tweeted that Cohen had asked him “directly” for a pardon.

When releasing the letter Wednesday, Meadows opined of Cohen, “His attorney now admits Cohen DID ask RE: a pardon, through counsel last year. They’re walking back a claim made unequivocally under oath. ‘Never’ didn’t really mean ‘never.’ Laughable.” 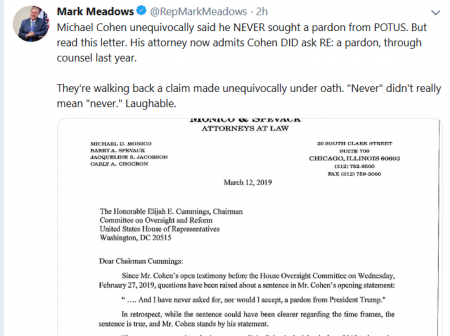 While questioning Cohen, Meadows claimed that Cohen lied on his pre-testimony written statement by omitting foreign “contracts,” and said he would prepare a referral to the Justice Department for possible criminal prosecution, an act in which he was joined by Oversight Committee ranking member Jim Jordan the following day.

On March 8, Jordan said in an interview that committee Republicans did not know that Democrats were meeting with Cohen prior to his testimony.  He said that pre-testimony meetings are “normal,” perhaps lasting a “half-hour,” but not like this.”

When opening the hearing, Cummings pledged that the committee would not tolerate dishonesty.  On Thursday, Cummings said he was scrutinizing Cohen’s testimony “to make sure they (Cohen’s statements) are true inconsistencies and not outright lies,” according to The Hill.

Some Republicans again seized upon Cohen’s claim that he “never” asked for a presidential pardon after another of his attorneys, longtime Clinton ally Lanny Davis, made a similar admission to Monico’s in a letter addressed to Cummings on February 28, 2019.

“…the new letter from Monico is unlikely to satisfy Republicans, who have charged Cohen may have committed perjury in his testimony,” CNN prognosticated Wednesday.

In addition to the question of whether or not Cohen asked for a pardon, Jordan and Meadows contended that Cohen perjured himself when he stated that he did not seek a position in the Trump White House after the 2016 election.  A CNN report issued February 28, 2019 appears to contradict Cohen’s claim with CNN’s own video from November 10, 2016.

Cohen, who worked for Trump for at least ten years, also claimed on February 27 that Trump used the 2016 campaign as “a marketing opportunity” rather than to win the election.