WHY WAS EARLEY STORY CHARGED WITH A CRIME? 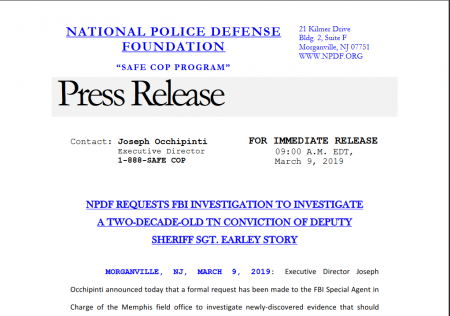 Founded in 1995 by Joseph Occhipinti, a nationally- and internationally-acclaimed retired federal law-enforcement officer, the NPDF’s stated mission is to “’Protect & Support’ the interests of law enforcement officers” through the provision of Legal Defense and Medical Support Services.

The organization has been recognized by the U.S. Congress, the United Nations, and a number of foreign governments, according to its website.

“Too often, dedicated law enforcement officials are victimized by criminal elements that fabricate allegations of misconduct,” the organization’s website reads. “When the NPDF suspects that an officer is being unjustly prosecuted or has been falsely convicted it will support the efforts of the officer for complete vindication. The NPDF will also consider establishing a legal defense fund wherein 100% of the tax-deductible donations can go to the officer’s defense.”

The NPDF calls upon not only the FBI, but also Tennessee Gov. Bill Lee to investigate the circumstances surrounding Story’s conviction, which came after a judge first dismissed the charge for “lack of probable cause.”  Several months later, Story was charged by the SCSO for the same crime and prosecuted by the office of then-District Attorney General William Gibbons.  He has since been attempting to clear his name of the conviction which has followed him for two decades.

The NPDF has additionally called upon Story’s congressman, Rep. Steve Cohen (D-TN9), “to support the NPDF’s request for an FBI investigation” into Story’s conviction.

As this publication and Memphis Truth Commission have reported, recently-uncovered evidence emanating from the SCSO demonstrates that the date on which Story allegedly sold marijuana to an undercover officer and confidential informant was not noted on the informant’s official activity log, which spans a seven-year period.

“In 2003, the NPDF commenced an investigation that disclosed that the prosecution may have been retaliatory since Deputy Storywas a federal ‘whistle-blower’ who publicly exposed allegations of official corruption and inmate abuse at the jail where he worked,” the press release states.  “…Sgt. Story, who lost his freedom, career and pension, has a pending application before a Shelby County court to overturn his conviction on this newly-discovered evidence. Since he is financially indigent, he is representing himself ‘pro-se.’”

A 501(c)(3) organization based in Morganville, NJ, the NPDF operates a number of national programs to apprehend criminals, support police officers and provide specialized humanitarian services to children in need.  Tax-deductible donations can be made here.