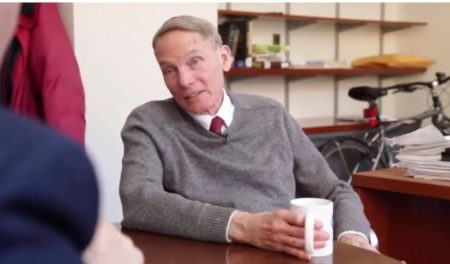 (Mar. 6, 2019) — In case you missed it, the US National Security Council has floated a proposal to form a Presidential Committee that will take a hard look at some of the climate change alarmist reports coming out of the federal agencies. I reported that important event here. The effort is being led by physicist Will Happer, a well known skeptic.

Not surprisingly, the climate alarmists are apoplectic at the very thought that a group of scientists might examine their cherished alarms. The prestigious magazine/journal “Science” has been a leader in expressing outrage, in a way that clearly shows that they have no idea what is going on. Their confusion is a fine example of why the Happer Committee is sorely needed.

When a supposedly great scientific publication cannot understand the situation it is worth a closer look. It turns out Science Mag is operating under a simple fallacy. We might even call it the “alarmist fallacy” since most alarmists fall for it.

The very first sentence of their very first critical article on the Happer Committee expresses the alarmist fallacy very nicely. Here it is:

The fact is that alarmism is one interpretation of the vast body of research that climate scientists report, while skepticism is a contrary interpretation. In short there is a scientific debate. Skeptical scientists like Happer have a very good grasp of the actual science. What they object to is alarmism’s interpretation.

As it happens, this Science Mag article is reprinted from E&E News, another supposedly elite outfit when it comes to scientific communication. It systematically and stupidly equates alarmism with “climate science” from beginning to end.

Here are a few more glaring examples of the alarmist fallacy in this article (with emphases added):

Science Mag: “Its goal is to provide an “adversarial” review of climate science to determine if a series of recent reports have overstated the risks posed by global warming, according to a memo circulated within the White House obtained by E&E News.”

Reality: The goal is to provide an adversarial review of the alarmism in these reports.

Reality: Happer rejects mainstream climate alarmism (as do I).

The alarmist fallacy occurs twice in one sentence!

Reality: These opponents of alarmism are praising a critical review of the alarmism that is promulgated by out-of-control federal agencies.

Of course this article also asserts specific alarmisms in various familiar ways, the usual stuff, but these are easily contestable. The truly deep fallacy is to think that climate alarmism and climate science are the same thing. This is wildly stupid. It just shows that science news outlets like the Science Mag and E&E News have no real concept of what is actually going on, namely a serious scientific debate.

It is no wonder then, that their readers also do not know what is going on. Even worse, this alarmist fallacy occurs in many other news outlet articles as well. Keep an eye out for these occurrences and blow the whistle on them.

The alarmist fallacy is journalism ruined by advocacy.