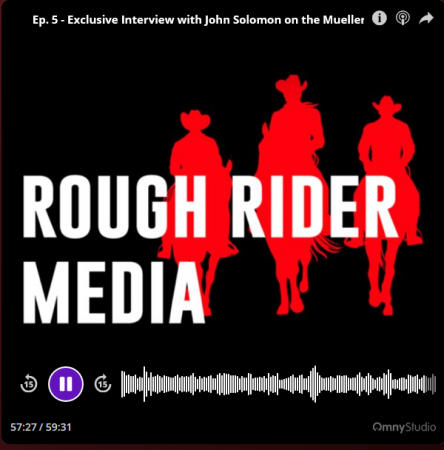 (Mar. 3, 2019) — On a February 21, 2019 podcast of “Rough Rider Media” hosted by David Bossie and Corey Lewandowski, investigative journalist and The Hill Executive Vice President of Digital Video John Solomon related an incident approximately two years ago, when two federal agents arrived at his home following his appearance on the “Hannity” show earlier that evening.

Bossie was a key Trump campaign and transition official and is President and CEO of Citizens United. Lewandowski served as Trump’s campaign manager through the 2016 primary season and has been a political commentator and lobbyist.

Last year, the duo published a book, “Trump’s Enemies: How the Deep State is Undermining the Presidency.”  It was their second book, with the first being “Let Trump Be Trump.”

The podcast is a revealing and in-depth exposé of the work Solomon has conducted into the FBI and Justice Department’s use of FISA warrants on former Trump campaign adviser Carter Page and other alleged politically-motivated abuses regularly reported by “Hannity.”  The discussion about the federal agents begins at the 44:00 mark.

Solomon told the co-hosts that on that night in March 2017, he had spoken on “Hannity” about “a whole bunch of FISA abuses” and the fact that in the waning days of the Obama regime, certain of its officials informed the FISA court of what the court termed in an opinion the following April “Significant non-compliance with the NSA’s minimization procedures involving queries of data acquired under Section 702 using U.S. person identifiers.”

When he arrived home that evening, Solomon said, there was a “blue sedan sitting there with government plates” outside his home, from which two individuals emerged, asking him if he were “John Solomon.”

“Please just hear us out for two minutes,” Solomon recalled they said after he confirmed his identity.  They did not say from what agency they were dispatched, Solomon recalled, and described them as resembling “G-Men” or “military.”  He said the agents told him they believed he was “at the precipice of a much larger scandal.”

“We can’t tell you much,” Solomon said the men told him of that “much larger” issue.  “The United States intelligence community, for a very short period of time, was used as a political-opposition research agency, and that is wrong.  That’s not what we’re given these powers for…” Solomon said were their words, advising him to continue to “peel this onion back.”  He added that they expressed concern that “the tools” made available to the U.S. intelligence community to identify “real terrorists and real spies” could be revoked if “the court finds out how they were misused.”

At the time, Solomon was collaborating at Circa News with Sara A. Carter, who is now working independently and as a Fox News contributor.  After the encounter, which Solomon said was not unpleasant, he “wrote everything down” and sent the notes to Carter.

As of June 28, 2017, Solomon was Chief Operating Officer at Circa, which is owned by Sinclair Broadcast Group.  Less than two weeks later, he made the move to The Hill.

When Lewandowski asked if “government officials” normally contact him after he issues a report, he said, “Never,” although he said he receives “lots of calls all the time.”

Lewandowski and Bossie complimented Carter on her reporting over the last two years, particularly in regard to the unfolding story of the FISA warrants and the “Russia collusion” allegations against the Trump campaign which have been pursued for more than two years by the FBI and Special Counsel Robert Mueller.  When Solomon was asked if Carter had ever had an encounter with government agents similar to his, he responded, “No, but she knew right away — she had been hearing for some time…something wasn’t quite right with this ‘Russia’ investigation but couldn’t really tell what it was.”

Solomon said that after considerable research, he and Carter discovered individuals who “knew what went on was wrong,” referring to the “dossier” compiled by Christopher Steele and provided to the FISA court to obtain surveillance warrants on Carter Page (no relation to Sara).

In early March 2017, just six weeks into his presidency, Donald Trump tweeted that his campaign and transition office at Trump Tower were “wiretapped” too much ridicule and excoriation from the mainstream media, citing “no evidence.”  “How low has President Obama gone to tapp my phones during the very sacred election process. This is Nixon/Watergate. Bad (or sick) guy!” reads a March 4, 2017 tweet of Trump’s.

The media ignored the fact that The New York Times had already reported Trump’s claim on January 19 and 20, the latter being Inauguration Day.

Lewandowski and Bossie then turned to discussing Deputy Attorney Rod Rosenstein, who is expected to leave the Justice Department in mid-March.  Former FBI Acting Director Andrew McCabe and others have claimed that in a series of meetings, Rosenstein suggested that he “wear a wire” when speaking with Trump in order to gather evidence that Trump was unfit for office.

According to the private testimony of former FBI General Counsel James Baker, parts of which have been released to certain media, Baker witnessed Rosenstein making the suggestion to a number of FBI and Justice officials and stating that two Trump cabinet members agreed to sign on to a resolution of sorts asserting that Trump could not fulfill his presidential duties, the scenario for which is set forth in the 25th Amendment.

During the discussion, Solomon speculated that Rosenstein, although recommending that former FBI Director James Comey be fired in a May 9, 2017 letter, may have participated in such a scheme but that “he can’t even invoke the 25th Amendment” because he is not himself a “cabinet officer.”

Solomon said that on his February 20 video broadcast, Harvard Emeritus law professor Alan Dershowitz characterized the actions of top officials at the FBI and DOJ as “an unconstitutional coup” (53:37)  “That goes back to everything we talked about today,” Solomon added.

In the final minutes of the podcast, Lewandowski asked Solomon what he thought former Trump attorney Michael Cohen would say during his testimony, which took place last Wednesday, to which Solomon said, “I don’t think it’s going to be a lot.”