“A D.C. DOMINATED BY THE DEEP STATE”

(Feb. 21, 2019) — OK, so the latest infected bunion on the political scene is the claim of fired and disgraced former FBI Acting Director Andrew McCabe that at some points in time during May 2017 following the inauguration of President Trump, several high-ranking folks at the FBI and the Department of Justice gathered in secret conclaves somewhere in D.C.

Whether these clandestine gatherings took place at the FBI, the DOJ, The Willard or some other favored Beltway watering hole is unknown.  That which is known, from Monsieur McCabe’s mouth, is that the purpose of the gatherings was to discuss the potential for the removal of President Trump through invocation of the 25th Amendment to the Constitution.  Let us hope that the lawsuit recently filed by government watchdog Judicial Watch produces some fruit.  Overlooking, for the moment, that great Latin legal term “falsus in uno, falsus in omnibus” (“false in one thing, false in all things”), which single maxim corroborates and explains the basis for the firing of McCabe, his admission invites analysis.

To begin with, the purpose of the 25th Amendment under Section 3 thereof (the other sections are irrelevant to the matter at hand), is to provide a clear roadmap for succession to the presidency in the event that the President is “unable to discharge the powers and duties of his office…,” with the official explanation of the intent expressed here as being how the occurrences of the “death, removal or resignation” of a president was to be handled.

That explanation notes that the Amendment was adopted to address situations where, other than death, removal – i.e., impeachment by the House and conviction by the Senate – or resignation, “for some reason the President becomes disabled to such a degree that he cannot fulfill his responsibilities.”  That explanation thus makes it clear that the intent of the 25th Amendment does not include an end-around run on Congress’s authority under Article 1, § 3, Cl. 6 regarding removal from office by impeachment.

Apparently an end-around run on Congress seeking the removal of a president sought via the 25th Amendment by FBI and DOJ personnel is OK, but a purported “bypassing” of an intransigent and Trump-hating Congress to address a national emergency precipitated at our southern border by that same body of politicians is off-limits.  Nice.  To reiterate that which has been noted here before: if hypocrisy did not exist, a liberal (and apparently a bunch of co-conspirators at the FBI and DOJ) would invent it at breakfast merely to survive until lunch. 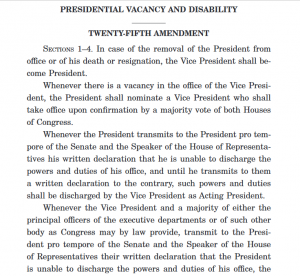 The 25th Amendment addresses the exigencies of death, removal, resignation and inability to discharge the duties of the office.  Stated otherwise, even if a president becomes temporarily “disabled,” that disability does not constitute a “high crime or misdemeanor” under Art. 2, § 4 of the Constitution or, for that matter, any reported U.S. Supreme Court case yet on record.

More specifically, the 25th Amendment does not sanction or authorize the FBI or the DOJ to pursue a rogue, quasi-coup d’état course of action akin to an extra-congressional impeachment simply because their chosen candidate – Hillary (“Dead Womyn Walking”) Clinton – completely tubed the 2016 election and/or because McCabe and his cohorts disapproved of the President’s policies.  And yet – if true – this is precisely what the unelected overseers of the rule of law in this nation (and not to mention the Constitution) seemed willing to explore.

The stench of a banana republic begins to fill the room.  Remember, these are the same species of “Americans” who could find no basis to indict Hillary Clinton for destroying over 30,000 email documents which were, at the time of their destruction, already under congressional subpoena.  And that doesn’t even get into Benghazi; Uranium One; the Clinton Foundation; etc. etc. etc.  Let’s wait and see what – if anything – now happens under newly sworn-in Attorney General William Barr.

In addition, the silly ancillary claim that somehow, President Trump’s “sanity” and psychological “stability” constitutes a “disability” justifying invocation of the 25th Amendment is just that: silly.  People may wish that he “tweeted” less; that he picked fewer fights with the media (which, by the way, looks more and more with each passing day like a Democrat political action committee… on meth…); or that he adopted a different hairdo… maybe a Mohawk.

But none of those elements constitute a basis for the bigwigs at the FBI and the DOJ to secretly meet to undermine a duly-elected president.  In all candor, one must ask why these same officials were not at all concerned about the usurpation of the presidency by President Trump’s immediate predecessor.  Oh…, wait…, sorry, my bad: Barack Hussein Obama II was (and is) a Democrat, while President Trump is not.  Mea culpa.

Memo to the electorate: when even Alan Dershowitz opines that, if true, McCabe and the other 25th Amendment co-conspirators were participants in an attempted soft coup d’état, you know something is verrry wrong in a D.C. dominated by the Deep State.  And to call that region a “swamp” trivializes the term.  “Port-a-Potty” comes closer.

Of the 25th Amendment and End-Around Runs added on Thursday, February 21, 2019