“INCLUDING A NATIONAL EMERGENCY” 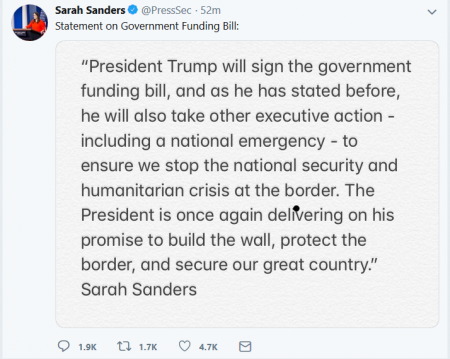 (Feb. 14, 2019) — Just after 3:30 p.m. EST, White House Press Secretary Sarah Sanders tweeted that President Donald Trump will declare the situation at the U.S.-Mexico border to be a “national emergency” in order to secure funding to reinforce or complete sections of border barriers.

For the last three weeks, Congress has been deliberating a Continuing Resolution (CR) to fund all government agencies and provide for better border security, a key demand of the president and salient campaign issue with his supporters.

Whether or not a wall or border barrier would be funded remained unclear until earlier this week, when reports indicated that congressional negotiators reached an agreement containing $1.375 billion for a border barrier, approximately one-quarter of what Trump wanted at $5.7 billion.

As of Wednesday, it remained unclear if Trump would sign the compromise.

Since shuttered government agencies reopened on January 25 after a 35-day hiatus due to the expiration of appropriations, members of Congress have attempted to reach an agreement which Trump might sign.  Some have urged the president to declare a national emergency, while others have suggested a second CR of perhaps a week would be sufficient for Congress and Trump to reach an agreement.

Beginning last March, Trump pledged not to sign any CR without funding for a border wall, a pledge he kept on December 21 when the two chambers of Congress could not agree on an appropriations bill with funding for that purpose. The partial government shutdown then began at midnight, lasting 35 days in which federal employees missed two biweekly paychecks.

On January 25, Trump signed a temporary CR funding all government agencies through February 15 with the understanding that Congress would make every effort to pass a bill prior to that time to avoid a second shutdown.  On Tuesday, it was reported that a tentative “deal” had been reached, although it was unclear if Trump would sign it.

Many Democrats have denied Trump’s claim of an emergency at the border, with some claiming it to be a “manufactured crisis.” Reps. Mark Meadows and Jim Jordan, both members of the House Freedom Caucus, are two of Trump’s strongest supporters regarding building a border wall.

Last month Trump traveled to McAllen, TX, where he met with Border Patrol agents and supervisors, both Texas U.S. senators, and relatives of those who lost loved ones at the hands of illegal aliens to gain an understanding of the perils the Border Patrol and other federal agents face when dealing with drug smuggling, human trafficking, and seriously-ill illegal border-crossers.

In her tweet on Thursday, Sanders said that Trump will sign the congressional compromise as well take “other executive action,” including declaring the “national emergency,” to enact what he believes will be in America’s best interest.