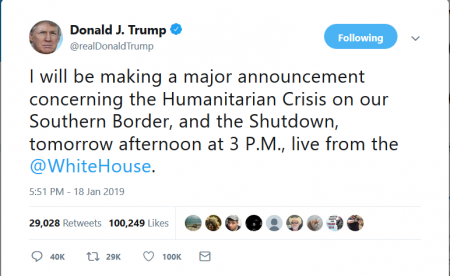 (Jan. 18, 2019) — At approximately 6:00 p.m. EST, President Trump tweeted that he plans to make a major statement encompassing what he said is the “Humanitarian Crisis on our Southern Border” and the partial government shutdown, now completing its 28th day.

Since funding lapsed for a number of government agencies at midnight on December 21, Trump has left the White House only to travel to the town of McAllen, TX on the U.S.-Mexico border for one day last week.  He has urged the Democrats, who do not wish to fund a border wall and now hold the majority in the House of Representatives, to meet with him to hammer out a border-security compromise.

Trump insists the country cannot be secured without a physical barrier on the southern border, while Speaker of the House Nancy Pelosi said she is unwilling to provide more than “one dollar” toward building one.  Previously, however, Pelosi and other House Democrats voted in favor of appropriating money for a border wall or fencing.

The president has suggested he could declare a “national emergency” resulting from the thousands of individuals traveling from South America — and other countries — and attempting to enter the U.S. by claiming political asylum.  Since October, multiple “caravans” have departed from Central America to make the dangerous trip to the U.S., although both Mexican and U.S. agents have largely prevented their entry into U.S. border states.

The U.S. Customs & Border Protection (CBP) agency, part of the Department of Homeland Security (DHS), has been affected by the shutdown, as have the EPA, the State and Justice Departments, the Transportation Safety Administration (TSA), and the EPA, among others.

Border Patrol agents have been encountering rising numbers of ill individuals seeking to stay in the U.S. as well as those who have been sexually assaulted during their northward trek, the Border Patrol has reported.  Earlier this week, CBP reported that “The largest single group of asylum seekers ever to cross into the U.S. tunneled beneath the border wall near San Luis, Arizona, on Monday” as reported by ABC News.

Pelosi and other Democrats have used the deaths last month of two “migrant” children who entered CBP custody to criticize DHS and the Trump administration generally on immigration policy and practices.

Since Trump grounded her military plane on Thursday to take a week-long trip overseas, Pelosi has not indicated that she plans to meet with Trump or her own caucus to craft a border-security compromise.  Pelosi has said she is greatly troubled by the 800,000 federal employees who did not receive a paycheck last Friday.

In his letter to Pelosi halting her travel, Trump stated that “In light of the 800,000 great American workers not receiving pay, I am sure you would agree that postponing this public relations event is totally appropriate. I also feel that, during this period, it would be better if you were in Washington negotiating with me and joining the Strong Border Security movement to end the Shutdown.”