THE PRESIDENT CANNOT HAVE “FRACTURED LOYALTY” 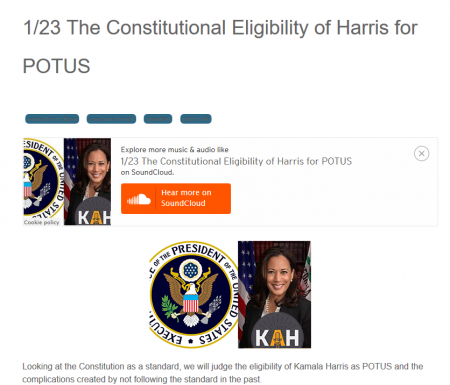 (Jan. 24, 2019) — On her Wednesday radio show, constitutional educator and author KrisAnne Hall discussed the issues of U.S. citizenship resulting from the passage of the 14th Amendment and what she believes to be the definition of the constitutional term “natural born Citizen.”

Article II, Section 1, clause 5 of the U.S. Constitution requires the president and commander-in-chief to be a “natural born Citizen,” a term of art not utilized anywhere else in the nation’s founding documents.

Hall said that newly-declared 2020 presidential candidate Kamala Harris, whose parents were legal immigrants from India and Jamaica, respectively, retaining that citizenship at the time of her birth, is not eligible.  She contended that under the “modern” interpretation of the 14th Amendment, Harris is a U.S. “citizen” but not a “natural born Citizen.”

Hall recalled the controversy over Barack Hussein Obama’s eligibility and concluded that he, too, was not eligible.  A former 2016 Republican primary rival of Donald Trump’s, Sen. Marco Rubio, also is ineligible due to his parents’ status as legal residents but non-U.S. citizens at the time of his birth, Hall said.

Hall added that both a “fractured” allegiance and an “adversity” toward another country, citing Rubio’s parents’ escape from communist Cuba and Rubio’s presumed “hatred” for that nation, would be a liability on the part of a president.

She stressed that a “citizen” is not the equivalent of “natural born Citizen.”  “The entire reason that the ‘natural born Citizen’ qualification was created was to keep foreign influence out of the executive branch,” she said,”because the executive branch… is the representative of the states in making foreign policy…If a president does not have loyalty and an obedience to the states that is primary to any other country, then we have a problem.”

Of another former Trump rival, Sen. Ted Cruz, Hall said his dual citizenship at birth precludes him from being “natural born.”  On his first campaign website, “FighttheSmears,” Obama not only claimed to have been born a dual citizen of the U.S. and Kenya due to his father’s citizenship, but also to be a “Natural Born Citizen” by virtue of the 14th Amendment.

At approximately the 14-minute mark, Hall quoted George Washington’s Farewell Address wherein he warned against the effects of “foreign influence” on “a free people,” at which point Hall’s husband and co-host, JC Hall, recalled some of Obama’s statements denying American exceptionalism.

“He said some very nasty things about America to begin with,” KrisAnne observed in response.

At 20:07, Hall said that “based on political history, a natural born Citizen is a child born on American soil by two citizen parents, because then you don’t have that fractured loyalty.”

The podcast can be heard here:  https://soundcloud.com/krisannehallshow/123-the-constitutional-eligibility-of-harris-for-potus