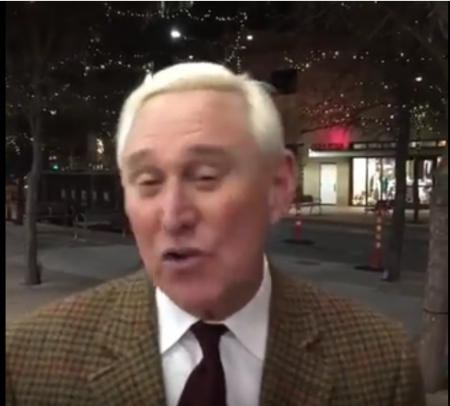 Stone, who has known Donald Trump since at least the 1980s, was indicted by a federal grand jury working with Special Counsel Robert Mueller’s “Russia collusion” probe for allegedly obstructing justice, tampering with a witness, and providing false information to Congress.

In September 2017, Stone testified to the House Intelligence Committee about his alleged contacts with WikiLeaks.  Although he later said he expected to be indicted in the probe, Stone has maintained his innocence of any wrongdoing in connection with or stemming from Donald Trump’s successful 2016 presidential campaign.

In the months leading up to the 2016 election, WikiLeaks released thousands of unflattering emails first from the DNC, and later from Clinton campaign manager John Podesta’s email account which many Democrats believe cost Clinton the election.

Stone has issued what appear to be contradictory statements as to whether or not he had direct contact with WikiLeaks in 2016, according to the indictment, although WikiLeaks has said it had no direct communication with Stone, also noted in the indictment.

On Wednesday evening, Stone was a guest on “Tucker Carlson Tonight” wherein he said he is facing financial ruin as a result of scrutiny by the probe for approximately “two years.”

“He has not been indicted for anything,” Carlson said in his introduction of Stone that evening.

In November, an acquaintance of Stone’s, Dr. Jerome Corsi, revealed that Mueller was offered him a plea deal to admit to guilt on one count of making a false statement to investigators, an offer Corsi rejected. Corsi then filed a criminal complaint with Acting Attorney General Matthew Whitaker and other parties, claiming misconduct on the part of Mueller and his prosecutors, most of whom are known to have ties to the political left.

The criminal complaint was followed by a civil lawsuit demanding a jury trial and $350 million in damages.  Corsi has not been arrested or indicted and has made a number of appearances on “Trish Regan Primetime” alleging that Mueller is “harassing” members of his family in an attempt to find a crime.

On Friday morning’s “Fox & Friends,” contributor and radio host Dan Bongino, who is also a former Secret Service agent, questioned why Mueller’s office did not simply contact Stone’s attorney and ask that his client turn himself in.

Stone’s arrest came amid increasingly frequent reports that the Mueller probe emanated from the Trump-Russia “dossier,” a politically-created product paid for by the DNC and Hillary Clinton campaign to gather “dirt” on the Republican front-runner. On both Wednesday and Thursday, John Solomon of The Hill reported that in 2016, then-FBI Chief Counsel James Baker, by his own sworn testimony to members of Congress, participated in “unusual” behavior by accepting information from the Democrat-aligned law firm Perkins Coie on alleged Trump-campaign collusion with Russia and reviewed the dossier contents before they were submitted to the Foreign Intelligence Surveillance Court (FISC) to obtain spy warrants on Dr. Carter page, a volunteer foreign-policy advisor to the Trump campaign at the time.

On Wednesday, Brian Cates, writing for The Epoch Times, strongly suggested that the “302s,” or written summaries of FBI interviews concerning DOJ official Bruce Ohr’s interactions with dossier author Christopher Steele and the FBI are inconsistent with Ohr’s own notes about those meetings, which Solomon reports he has reviewed.

Ohr reportedly conveyed information from the dossier to FBI and DOJ officials, including Andrew Weissmann, a controversial prosecutor who is considered Mueller’s second-in-command.  Ohr also reportedly testified that he shared the information, which has never been verified, with then-FBI Counsel to the Deputy Director Lisa Page and Counterintelligence Assistant Deputy Director Peter Strzok, both of whom were recruited in 2016 to work on the Mueller “collusion” probe after participating in the Hillary Clinton private email server investigation.

At the time, Page was advising then-FBI Deputy Director Andrew McCabe on legal matters while she and Strzok were having an affair and exchanging text messages about their loathing of Donald Trump. In May of last year, Page resigned from the agency, while Strzok was fired in August. McCabe, fired last March, is reportedly under criminal investigation for allegedly leaking information to the media.

It has previously been reported that an FBI official “may have” directed the alteration of a number of 302’s concerning the Trump-Russia probe.

Baker, who resigned from the FBI last May, is also under criminal investigation for allegedly leaking to the media.

CNN’s “New Day” posted video on Twitter it gleaned from a reporter present during Stone’s early-morning arrest wherein the FBI surrounded his home in darkness. “New Day” reported that David Shortell said he was at Stone’s home as a result of “unusual grand jury activity in Washington D.C. yesterday.” 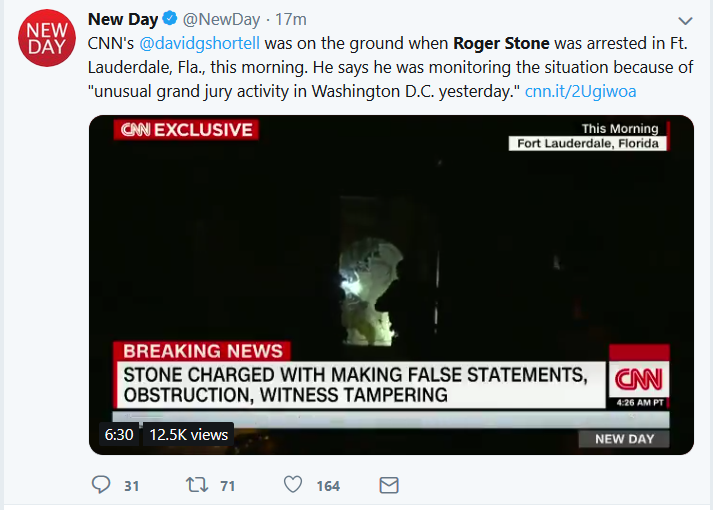 Stone is expected to appear in court at 11:00 a.m. on Friday, NBC News reported.

Update, 9:32 a.m. EST:  According to ABC News, Stone’s attorney, Grant Smith, responded to Stone’s arrest with, “There was no Russian collusion, it’s a clear attempt at silencing Roger.  This was an investigation they started as about Russian collusion and now they’re charging Roger Stone with lying to Congress about something he honestly forgot about, and as Roger has stated publicly before, he will fight the charges.”