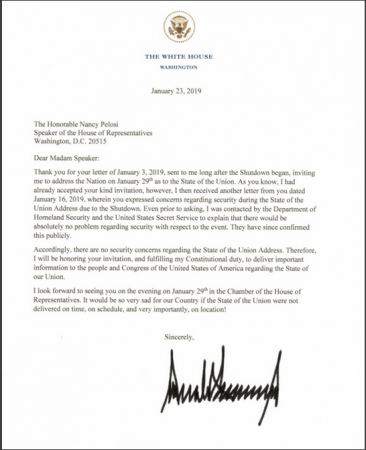 (Jan. 23, 2019) — At 12:25 p.m. EST Wednesday, Fox News reported that President Trump issued a letter “accepting” Speaker of the House Nancy Pelosi’s formal invitation, extended January 3, for him to give the annual State of the Union address on January 29 in the well of the House chamber, as is customary.

Within moments, Frank Thorp V of NBC News tweeted an image of the letter (pictured right).

Last week Pelosi had suggested that Trump delay giving the address, to which Trump had responded on Twitter, stating that he had already issued a written acceptance of her invitation. “While a contract is a contract, I’ll get back to you soon!” Trump tweeted.

Pelosi’s reasoning for suggesting a postponement was that “security” was a concern given that parts of the Department of Homeland Security (DHS), including the U.S. Secret Service, are either furloughed or working without pay during the now-33-day-old partial government shutdown.

The shutdown came about at midnight on December 21 when the White House and Congress failed to agree on an appropriations bill to keep all parts of the government functioning. Trump wants to build a wall or barrier on the U.S.-Mexico border, for which he requested Congress budget $5.7 billion, while Pelosi and Senate Minority Leader Chuck Schumer have vowed there will be “no money” for an “immoral” border wall.

Some Democrats are urging their leadership to reconsider their stolid stance against Trump’s request, but both Pelosi and Trump have said they will not deviate from their respective positions.

According to Trump’s letter Wednesday, Pelosi put her proposal to postpone his address in writing. “Thank you for your letter of January 3, 2019, sent to me long after the Shutdown began, inviting me to address the Nation on January 29th as to the State of the Union,” Trump wrote. “As you know, I had already accepted your kind invitation, however, I then received another letter from you dated January 16, 2019, wherein you expressed concerns regarding security during the State of the Union Address due to the Shutdown. Even prior to asking I was contacted by the Department of Homeland Security and the United States Secret Service to explain that there would be absolutely no problem regarding security with respect to the event. They have since confirmed this publicly.”

It is unclear if a “walk-through” of the speech requested by the White House on Tuesday, its second such request, was completed.

“Ultimately, whether the State of the Union goes on as scheduled is up to Pelosi, not Trump. Trump cannot deliver a State of the Union address on the floor until the House and the Senate vote to convene a joint session of Congress,” Business Insider reported Tuesday.

“Joint sessions” of Congress normally take place in the House of Representatives, according to that body’s history.  “A Joint Session takes place when the House and Senate adopt a concurrent resolution. Joint Sessions typically are reserved to hear an address from the President of the United States or to count presidential electoral votes,” the website states.

Trump additionally wrote that he believes it his “constitutional duty” to provide the American people and Congress with “information” on the state of the nation, with the term “information” a quote from Article II, Section 3 of the U.S. Constitution dealing with the president.  That section reads:

He shall from time to time give to the Congress Information on the State of the Union, and recommend to their Consideration such Measures as he shall judge necessary and expedient; he may, on extraordinary Occasions, convene both Houses, or either of them, and in Case of Disagreement between them, with Respect to the Time of Adjournment, he may adjourn them to such Time as he shall think proper; he shall receive Ambassadors and other public Ministers; he shall take Care that the Laws be faithfully executed, and shall Commission all the Officers of the United States.

On Friday, Pelosi conceded that Trump had “been invited” to give the address but that she preferred to “work together for another date when government is open.”

Trump then said that he “looks forward to seeing” Pelosi on the evening of the 29th, concluding with, “It would be so very sad for our Country if the State of the Union were not delivered on time, on schedule, and very importantly, on location!”

Will Trump Give the “State of the Union” in the House? added on Wednesday, January 23, 2019

One Response to "Will Trump Give the “State of the Union” in the House?"