(Jan. 16, 2019) — A terrorist attack on a hotel in Nairobi, Kenya was carried out Monday by the Al Qaeda affiliate Al Shabab, killing 15 people, including an American citizen, according to multiple sources.

The New York Post reported Wednesday that the American killed is I-DEV International CEO Jason Spindler.  He was 40 years old.

According to a quote from Kenyan President Uhuru Kenyatta, the perpetrators, who used “car bombs and gunfire,” were killed by Kenyan “security forces,” which appears to refer to the National Police Service.

In September 2013, the same terrorist group attacked the Westgate Mall, reportedly located in close proximity to the hotel struck this week, killing 67 people, including

At the time, Barack Obama had said that Al Qaeda had been “decimated” worldwide.

ISIS formed in 2013 in the wake of the Syrian civil war as a spinoff of Al Qaeda, the group which planned and carried out the attacks in the U.S. on September 11, 2001 and a myriad of others around the world in modern history.

The attack was reportedly carried out by a suicide bomber in the town of Manbij.

On December 19, President Trump tweeted that U.S. forces in Syria, which were said to number approximately 200 when they deployed in 2015 but grew to 2,000, would be withdrawn from Syria.  “US forces are in Manbij to back Kurdish and Arab fighters who have driven IS out of almost all of eastern Syria,” the BBC reported Wednesday.

Trump’s tweet was interpreted to mean that the withdrawal would occur in short order and was followed by severe criticism by some military and policy analysts as well as members of Congress and the media.

One of Trump’s strongest critics on the issue is Sen. Lindsey Graham (R-SC), chairman of the Senate Judiciary Committee.  After news of Wednesday’s attack broke, Graham directed a statement to Trump during Wednesday’s committee confirmation hearing of William P. Barr for U.S. attorney general asking him to reconsider his plan to withdraw U.S. troops from Syria.

Following Trump’s announcement, then-Secretary of Defense James Mattis announced his departure, followed within days by U.S. envoy on ISIS Brett McGurk.  Both had planned to leave by February, Trump tweeted in response. 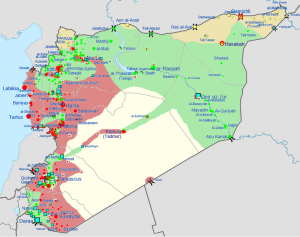 On January 6, National Security Adviser John Bolton said that U.S. troops will not be withdrawn until the safety of Syrian Kurds, who U.S. forces have trained to combat the terrorists, is guaranteed and ISIS “destroyed,” The Washington Post reported.

In public remarks at the U.S. State Department Wednesday morning, Vice President Mike Pence said that “The caliphate has crumbled and ISIS has been defeated,” although it is clear that the administration was aware of the attack.

National Review reported that Pence said U.S. troops would remain in Syria “to insure that ISIS does not rear its ugly head again.” Time.com also reported the statement.

As many as 16 people may have been killed on Wednesday, Bloomberg reported.  In addition to the deaths of four U.S. soldiers, three sustained injuries, Reuters said.