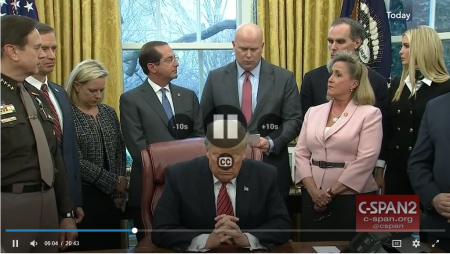 (Jan. 9, 2019) — Human-trafficking legislation passed in the midst of a partial government shutdown over a bitter feud between congressional Democrats and the White House was signed into law Wednesday, before which President Donald Trump provided background while surrounded by congressional members of both parties as well as trafficking survivors and members of law enforcement.

Others in attendance were Acting Attorney General Matthew Whitaker, Ivanka Trump, Homeland Security Secretary Kirstjen Nielsen, and Assistant Attorney General for Civil Rights Eric Drieband, who described the apprehension and prosecution of a Mexican human-trafficking ring which brought girls and women across the border and forced them into prostitution.

The bill was introduced by Rep. Chris Smith (R-NJ4) and named the “Frederick Douglass Anti-Human Trafficking Legislation,” providing $430 million over a four-year period for education to combat and assistance to those who have fallen victim to human traffickers, NorthJersey.com reports.

The measure is Smith’s fifth proposal aimed at stopping what Trump said is a very old but persistent global problem during his approximately 20-minute remarks.  “My administration has made human trafficking one of the highest priorities,” Trump said.

At the 9:20 mark, Trump focused on the issue of border security, one he addressed on Tuesday night from the Oval Office in an effort to make the case for building a physical barrier between the U.S. and Mexico.  “We have to do what’s right at our border…human trafficking cannot be stopped if we don’t have a steel barrier or a concrete wall, something very powerful, it cannot be stopped.” [sic]

During his comments, Trump indicated that he “thinks” Democrats and the administration are drawing closer to an agreement on border security.

The video is here:  https://www.c-span.org/video/?456816-1/president-trump-declare-national-emergency-shutdown-talks-fail

Just after the 14:00 mark, Trump took questions from reporters, answering at length on his views on border security.  At 18:15, he was asked why he did not declare a “national emergency” on Tuesday night, to which he responded that “Because I think we might work a deal, and if we don’t, I may go that route.  I have the absolute right to do ‘national emergency’ if I want.”  When asked what his “threshold” for such a decision is, he responded, “My threshold will be if I can’t make a deal with people who are unreasonable.”