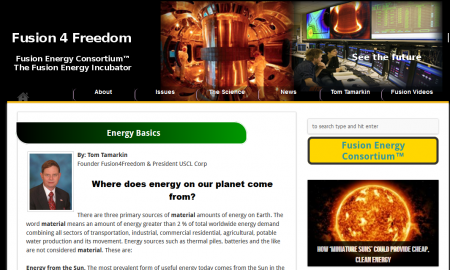 These companies are virtually 100% dependent on the politically driven notion of “dangerous manmade global warming and climate change.” The media, public and political establishment constantly recite the assertion that 97% of scientists say the problem is real and manmade carbon dioxide (CO2) is the cause.

However, increased concentrations of CO2 in the atmosphere do not lead to global warming and climate change. Carbon dioxide is a trace gas in the atmosphere. The major “greenhouse gas” is water vapor.  An intricate feedback system regulates the Earth’s temperature, maintaining immunity from temperature increases and decreases due to such trace gases.

Furthermore, the false notion of CO2-driven climate change is responsible for the potential massive redistribution of wealth from now-wealthy industrialized nations to poor countries. This has led to the corrupt worldwide business of carbon tax credit trading and more money to fund wind, solar and biofuel energy. Green industries should not predicate their business models on false claims about climate change.

They should base their businesses and R&D budgets on the fact that fossil fuels will become less economically viable over the coming decades as easily recovered reserves are depleted. Renewables such as solar and wind cannot provide material amounts of energy required worldwide – and require vast amounts of metals and other materials that are themselves not renewable or sustainable.

Utilities and energy companies must be free to use petroleum, coal, natural gas and biofuels at market-demand costs and must increase nuclear energy production. New sources of high energy density power generation must be created.

Today the “green energy” or “renewables” sector of the power generation industry is driven by the perceived but not scientifically proven notion that carbon dioxide resulting from the burning of fossil fuels and bio-fuels cause “global warming” or “climate change.” This is based on incorrect ideas about the real practical effects that “greenhouse gases” cause when introduced into our atmosphere.

This chart demonstrates in dramatic fashion that there is absolutely no connection between steadily rising CO2 levels and nearly stable to slightly higher average global temperatures over the past four decades. 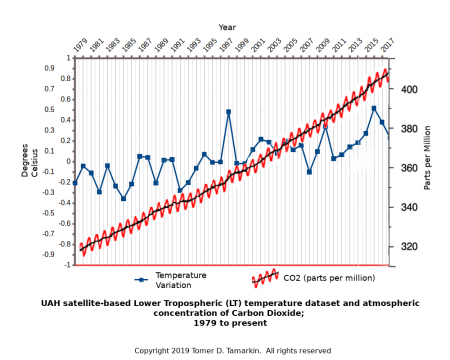 Water vapor is the gaseous form of water and is by far the most important greenhouse gas. Its spectral absorption is wider than that of carbon dioxide – meaning its absorption of photons from the Sun, as radiated by the Earth’s surface at night, across a wider electromagnetic radiation (EMR) spectrum, causes a higher rise in molecular vibrational momentum, equating to higher thermal rise than carbon dioxide.

It is theoretically possible that carbon dioxide and other non-condensable greenhouse gases like methane, nitrous oxide and ozone can create minute increases in thermal absorption and therefore could increase the amount of water vapor in the atmosphere via a “positive feedback cycle,” leading to warming and an increase in evaporation of sea water. However, the trace amounts of these gases would lead to virtually undetectable and immeasurable temperature and water vapor increases.

Moreover, adding more water vapor to the atmosphere would also produce a negative feedback effect. This could happen as more water vapor leads to more cloud formation. Clouds reflect sunlight and reduce the amount of energy that reaches the Earth’s surface to warm it. If the amount of solar warming decreases, then the temperature of the Earth would decrease.

In that case, adding more water vapor would result in global cooling, rather than warming. But cloud cover does mean more condensed water in the atmosphere, making for a stronger greenhouse effect than non-condensed water vapor alone. It is warmer on a cloudy winter day than on a clear one.

Thus the possible positive and negative feedbacks associated with increased water vapor and cloud formation will largely cancel one another out and further complicate the ability to model these feedback cycles using computer simulation and mathematical modeling.

Many in the “renewables energy” industry will object to this analysis, because they see it as undermining their reason to exist, affecting investor interest and sales opportunities. They miss the key point.

We do need to find replacements for fossil fuels – but not because of “climate change.” The real driver is the absolutely indisputable fact that we are depleting economically viable sources of fossil fuels, while at the same time increasing our demand for energy worldwide. The key term is “economically viable,” because the petroleum industry will be forced to pursue more difficult to recover deposits of oil and natural gas, while also enduring ever increasing amounts of litigation.

Today the only viable energy source beyond fossil fuels is nuclear fission. Our nuclear energy industry must be rebuilt if America is to remain a leader in energy, economic growth and opportunity. We must also continue our research and development in fusion energy which has many advantages over nuclear fission, if it is ever perfected.

We commissioned an objective science-based analysis of solar power as a means to generate 100% of baseload power in the USA based on current demand. The results are clear: solar power for baseload electricity is simply unrealistic. It is a virtual impossibility to power America from solar energy based on the science, let alone the economics, reliability or land and material requirements. Electrifying the transportation infrastructure will increase this impossibility several fold. The same is true of wind power.

We must develop the next generation of very high energy density nuclear power – first nuclear fission, to be replaced possibly by fusion in the mid to late 21st Century. We must also learn to conserve energy and materials better, not to save the planet from man-made climate change, but to give man more time to develop high flux density energy generation science and technology.

In December 2018, both Excel Energy and Northern Indiana Public Service Company (NIPSCO) announced plans to convert to 100% renewable green energy generation by 2050. That is a scientifically impossibility, unless policy makers and environmentalist alike redefine nuclear energy as green.

Why would they make such claims? For Excel boosting stock prices through subsidies comes to mind.

NIPSCO is a government-protected monopoly utility, with Indiana state government guaranteeing NIPSCO a profit of approximately 10% for every dollar it spends. That means NIPSCO has an obvious financial self-interest to engage in costly business practices. Building expensive new power facilities, even when existing facilities are working perfectly well, is one of the most effective ways for NIPSCO to ramp up its spending and guaranteed profits. Of course both companies do so at the expense of consumers, many of whom have no knowledge that their electricity bills are about to rise substantially.

Let energy buyers beware. Politicians, activist groups and industrialists are all using “climate change” to increase their power and income. We need to figure out what they’re doing – and fight back. 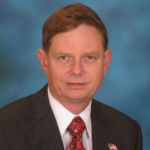 Tom Tamarkin has been involved with the utility business and energy since 1985. He is founder and president of EnergyCite, Inc, in Sacramento, CA and founder and GM of the Fusion Energy Consortium.