“SLAMMED TO THE PAVEMENT” 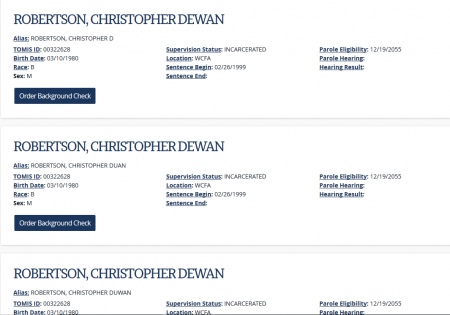 (Dec. 22, 2018) — The following letter and enclosures were received on Wednesday from TDOC inmate Christopher Robertson, #322628, from whom we have heard previously regarding conditions in his former prison, the Turney Center Industrial Complex (TCIX) in Only, TN.

Last year, Robertson had been outspoken in calling for improvements in “racial relations” and for prison management to stop the “unauthorized use of force.” At that time, he collected signatures and submitted a petition to the TCIX Inmate Council requesting those changes and others.

A communication last March from Robertson’s wife confirmed that by that time, he had been relocated to the Whiteville Correctional Facility.

In his most recent letter, Robertson wrote that his relocation was a result of what he described as the “planting” of a “shank” in his cell, a strip-search and two assaults on the part of TCIX staff one day after he “had one of the inmate counsel members pose a question to the Turney Center Administration, which I personally asked Turney Center’s Warden, Kevin Genovese months before the question of:  ‘Why are TC inmates families being subjected to be around child molesters in the Visitation Gallery?'”

He submitted the question on February 15, he wrote, and on February 16, “I I/M Robertson…was stripped searched by Turney Centers Dustin Mackin – Internal Affairs, Robert Story – Cert Team Member and Clint Zyla – S.T.G. Coordinator in our then assigned cell 1B-118.” [sic]

The name “Clint Zyla” appears on pages 8 and 9 of Robertson’s mailing, which detail the first alleged offense, while Story and Mackin’s names appear on the second disciplinary write-up on page 12.  On page 4, Robertson claimed that the write-ups he received for “Poss. of a Deadly Weapon” and “Participating in a Security Threat Group Activity” [sic], meaning being a member of a gang, were “fabricated by Turney Centers officials under the orders of (Warden) Kevin Genovese and AWS Jason Clendenion.”

The Post & Email has reported on a saga said to involve Clendenion related to us by Tennessee state employee Jamonica Taylor, who visited an inmate on Thanksgiving Day 2017, left her keys with the check-in desk as requested, and was told after the visit that her keys could not be found.  The unpleasant incident cost her more than $1,300, she said; Taylor provided us with receipts from the expenses she incurred from having to hire a towing company to take her car to her home and then to a Toyota dealer to have a new key manufactured.

The state denied Taylor’s request for reimbursement due to TCIX’s alleged negligence but appealed to the Tennessee Claims Commission.  The Post & Email is not aware of any final adjudication on Taylor’s claim.

Robertson claimed that after the shank was “found” by staff, he and his cellmate were told to step outside of their cells after a strip- search. “Ms. Rondeau there wasn’t any shank in my then assigned cell,” Robertson wrote on page 3. [sic]  “It was planted there by Turney Center-Dustin Mackin – I.A., because I seen him cuff said shank in his hand while my cellmate and I were being stripped searched inside our assigned cell.”

After that, he wrote, while en route to the area of the prison known as “segregation,” he was “slammed to the pavement.”  “Evidence of this can be proven by looking at T.C. Zone #1 outside cameras on the morning of Feb. 16th, 2018,” he added.

Further, Robertson claimed that “Upon entering segregation I I/M Robertson was placed in a secluded hallway of segregation w/o cameras, where/when Sgt. Gilbert slammed the left side of my face into the wall, and Disciplinary Chairman Cpl. Thomas pulled down on the handcuffs that was still on my wrist, behind my back, causing me considerable pain.”

“In a attempt to cover up this frame-up, and physical assault on my person.  Both Kevin Genovese – T.C.I.X. Warden, and Jason Clendenion – T.C.I.X. AWS had me I/M Robertson transferred to Whiteville Correctional Facility in Whiteville, Tennessee on the same date of incident,” Robertson continued. “I I/M Robertson wasn’t seen, nor tended to by any of T.C.I.X. medical personnel while in segregation after this assault,” he wrote, again referring to “evidence” contained in security-camera footage.

On Page 6, Robertson said he filed a grievance about the treatment he received but that it was “swept under the rug.”  “I’m trying my best to resolve this matter w/o filing a lawsuit against T.D.O.C.,” he said.

Page 7 is titled “MEMO,” addressed to Genovese from “B. Cotham, UM (Unit Manager),” and dated February 15, 2018.  The subject line reads, “Inmate Council Questions.” Under the heading “Unit 1 Questions,” a list of five questions with answers immediately following each question appears in bold type, said to have been provided by “Unit Manager Cotham.”

Question #4, which is highlighted, reads, “Why are inmate’s families being subjected to be around child molesters in the VG?  For the same reason children are being around murders, thieves, drug pushers, etc.  This is prison and the reason your family is in this situation at visitation is because you got sent to prison.”

Below the first group of five questions is a second heading, “Questions for the Warden to Answer,” with nine questions absent answers appearing below. 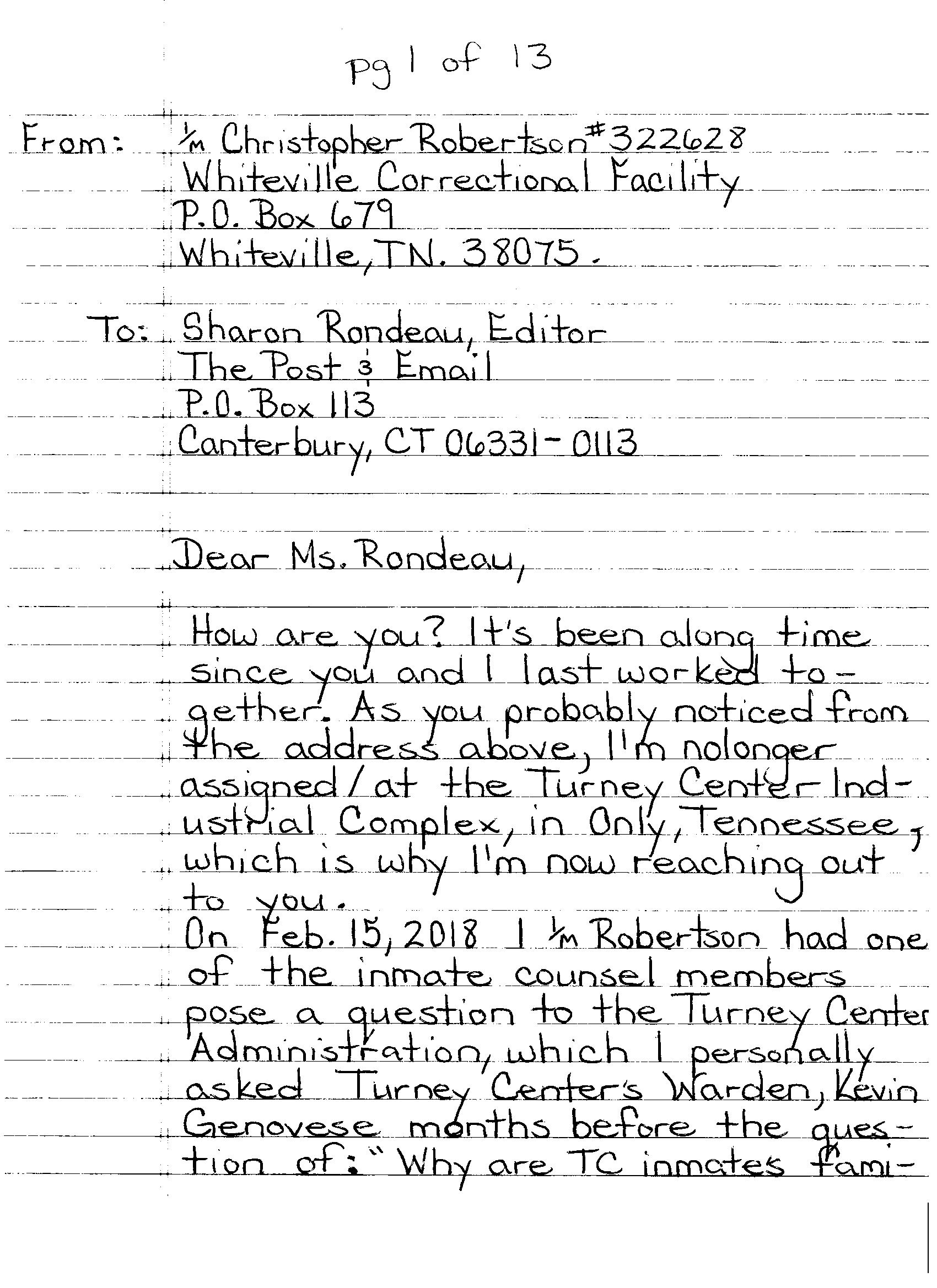 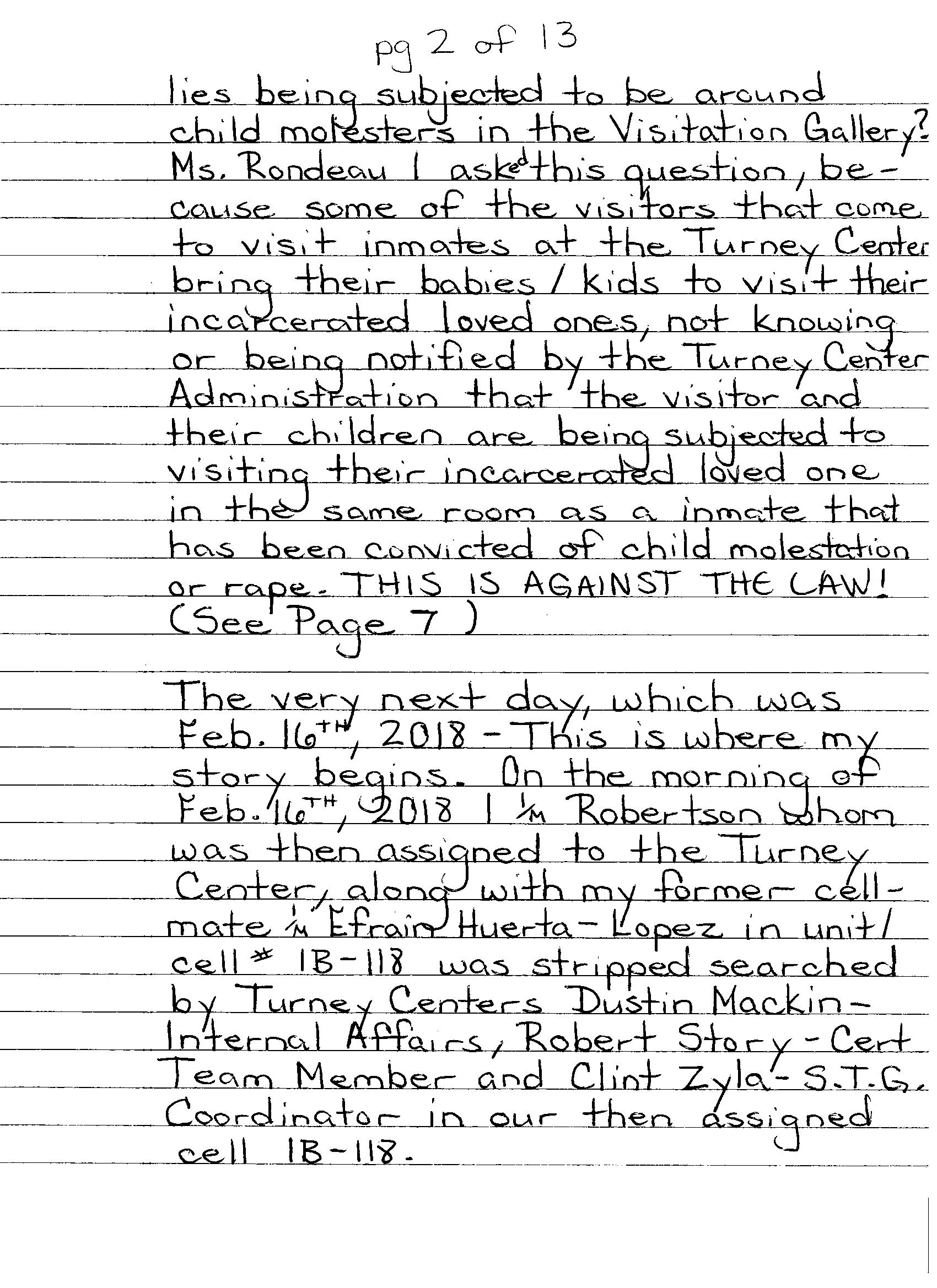 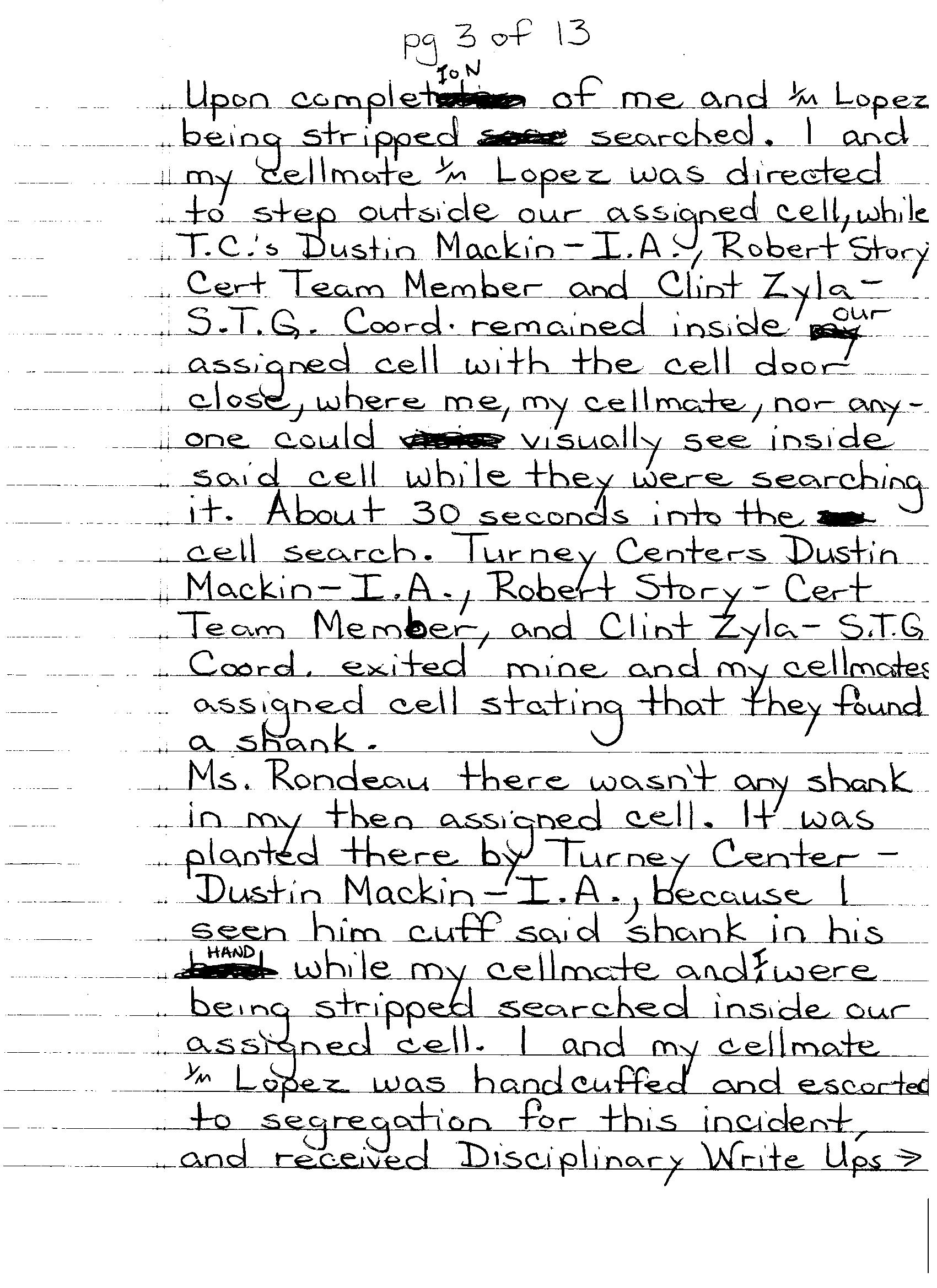 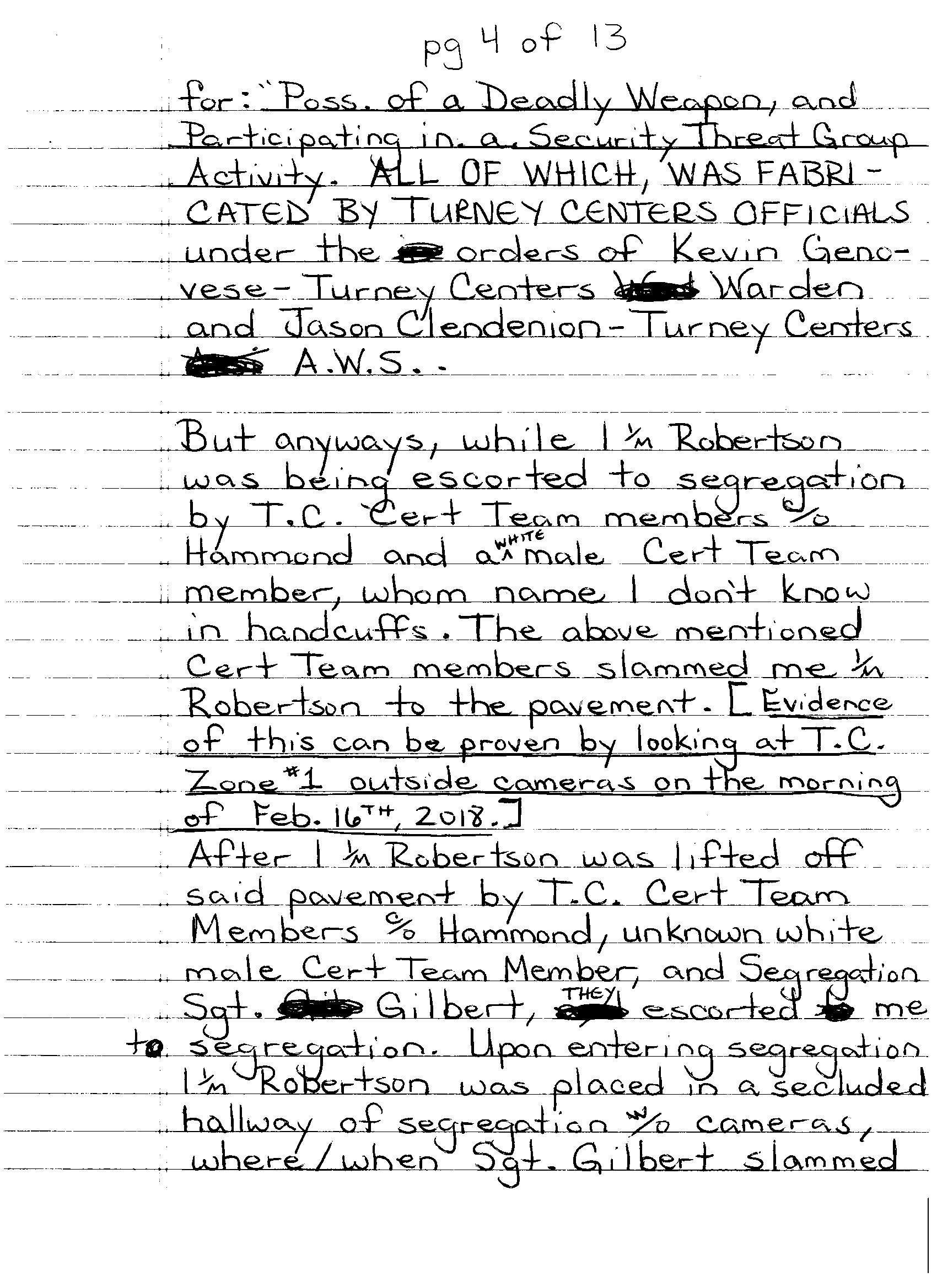 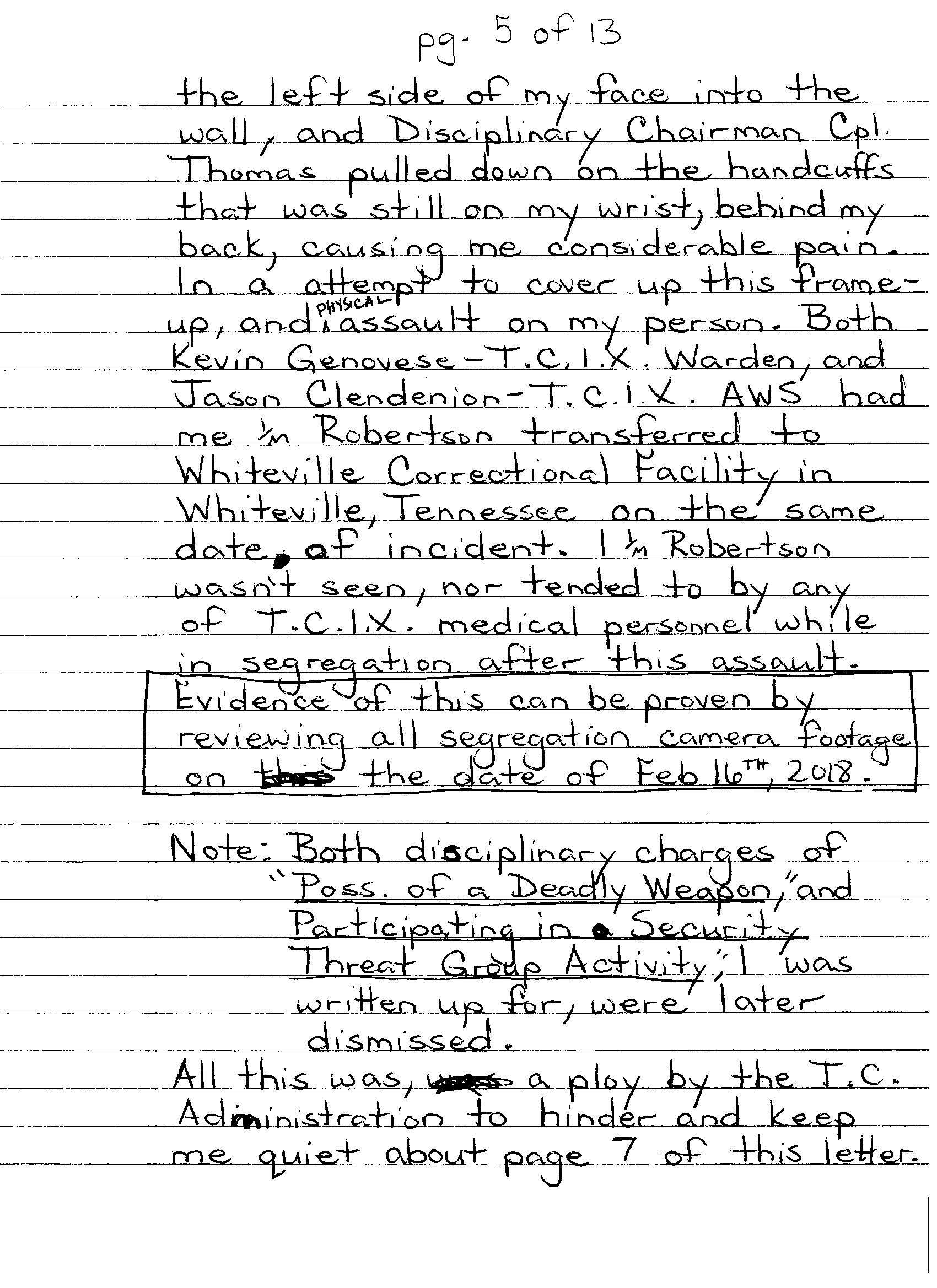 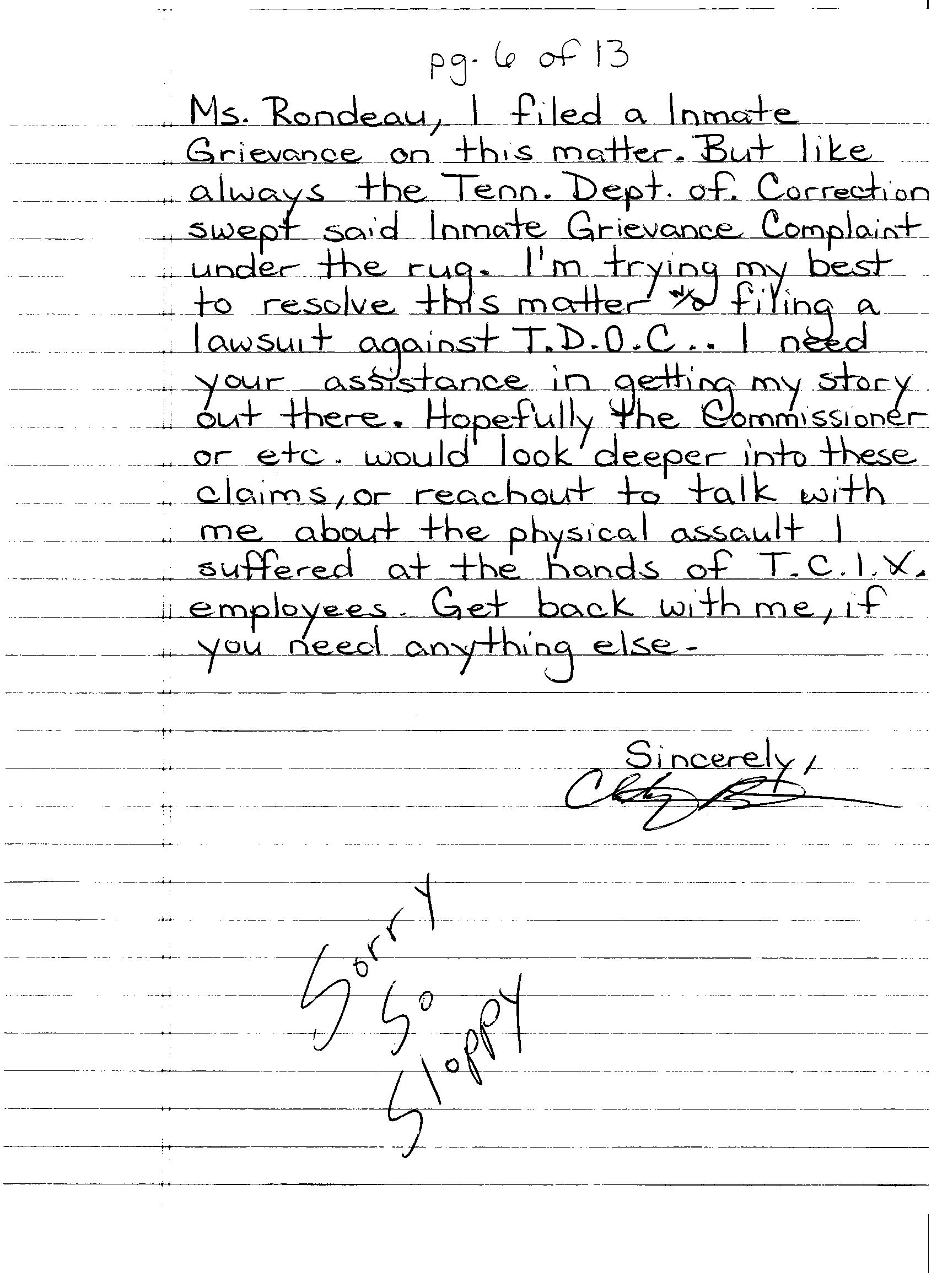 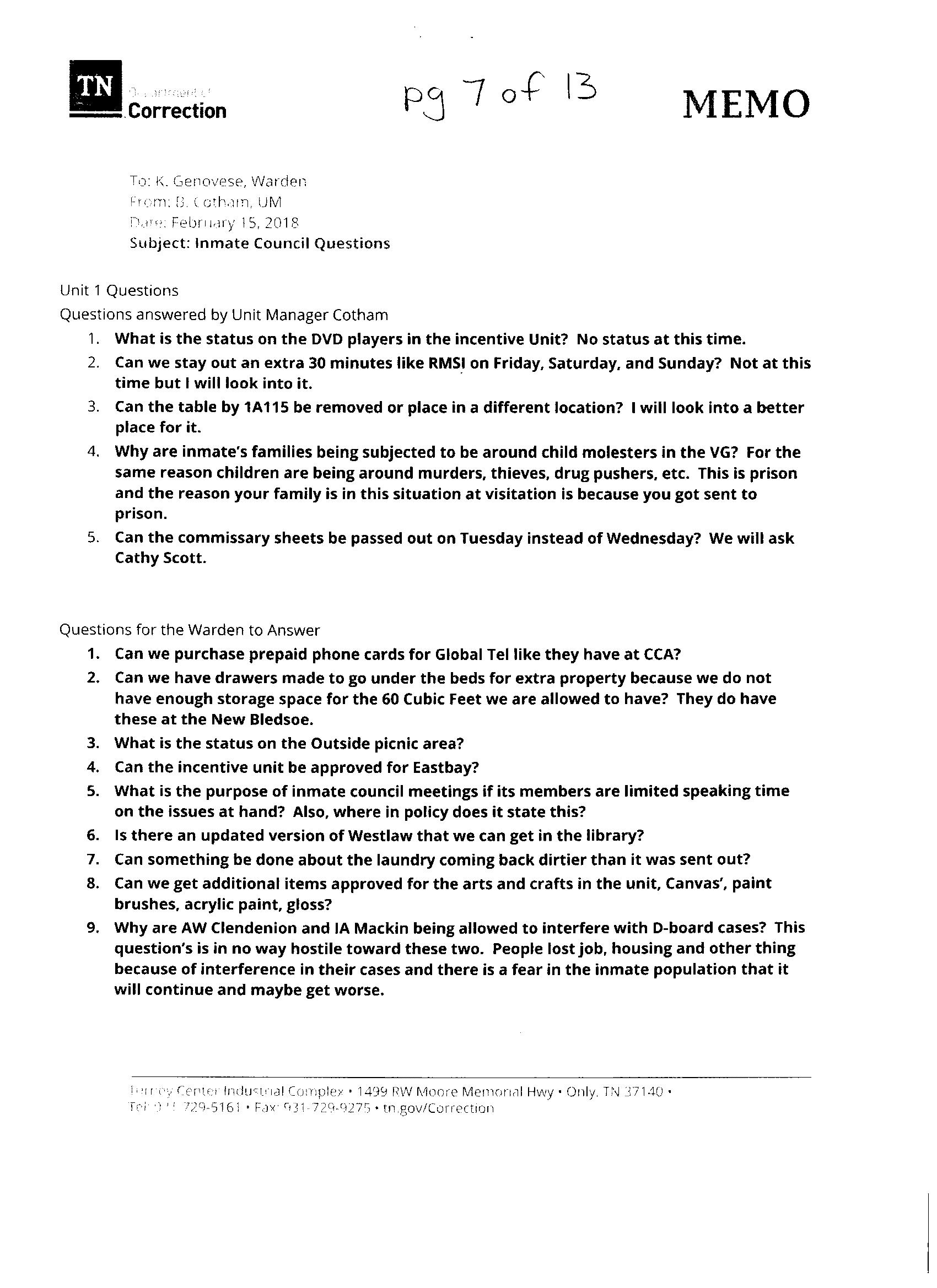 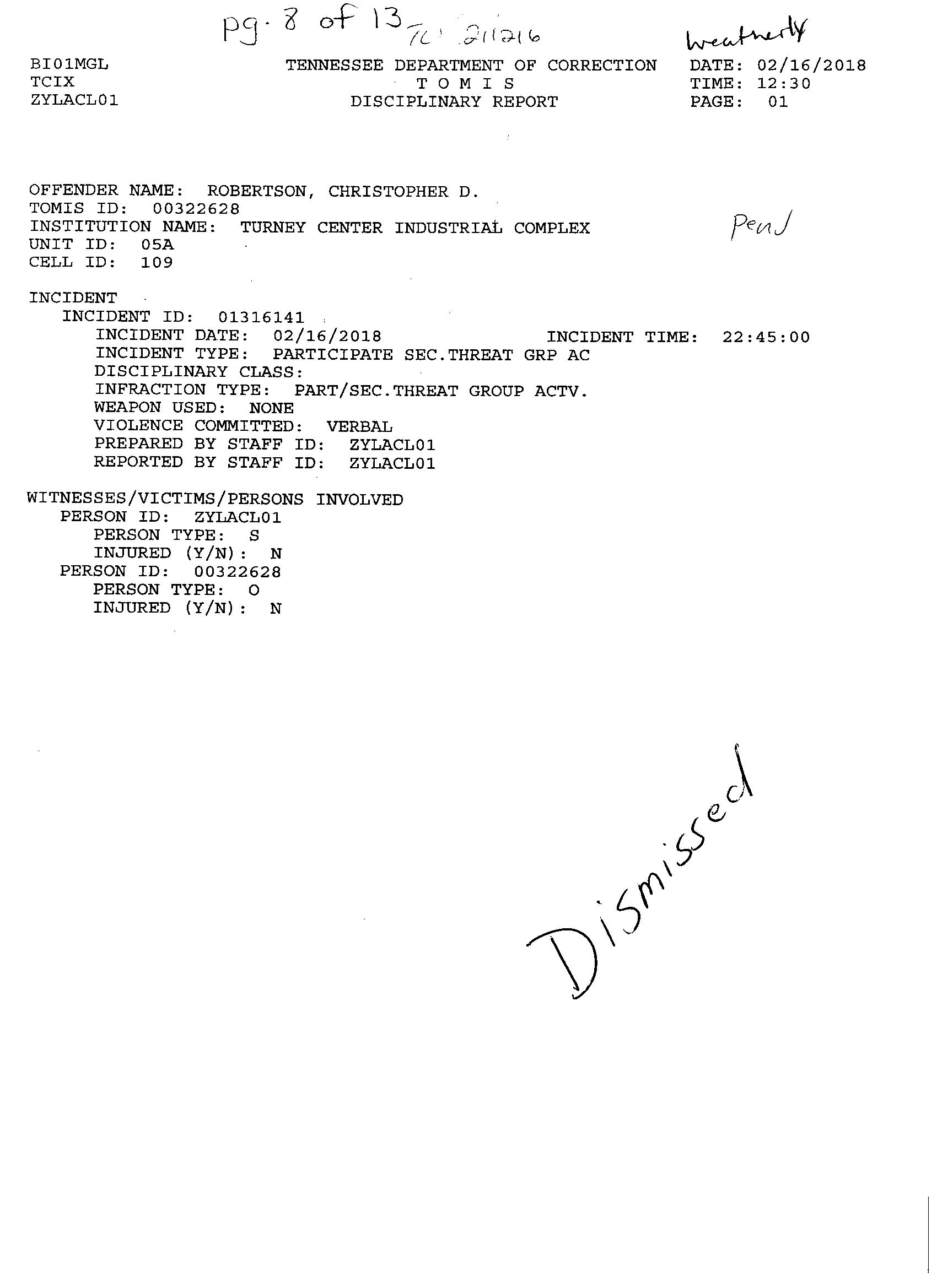 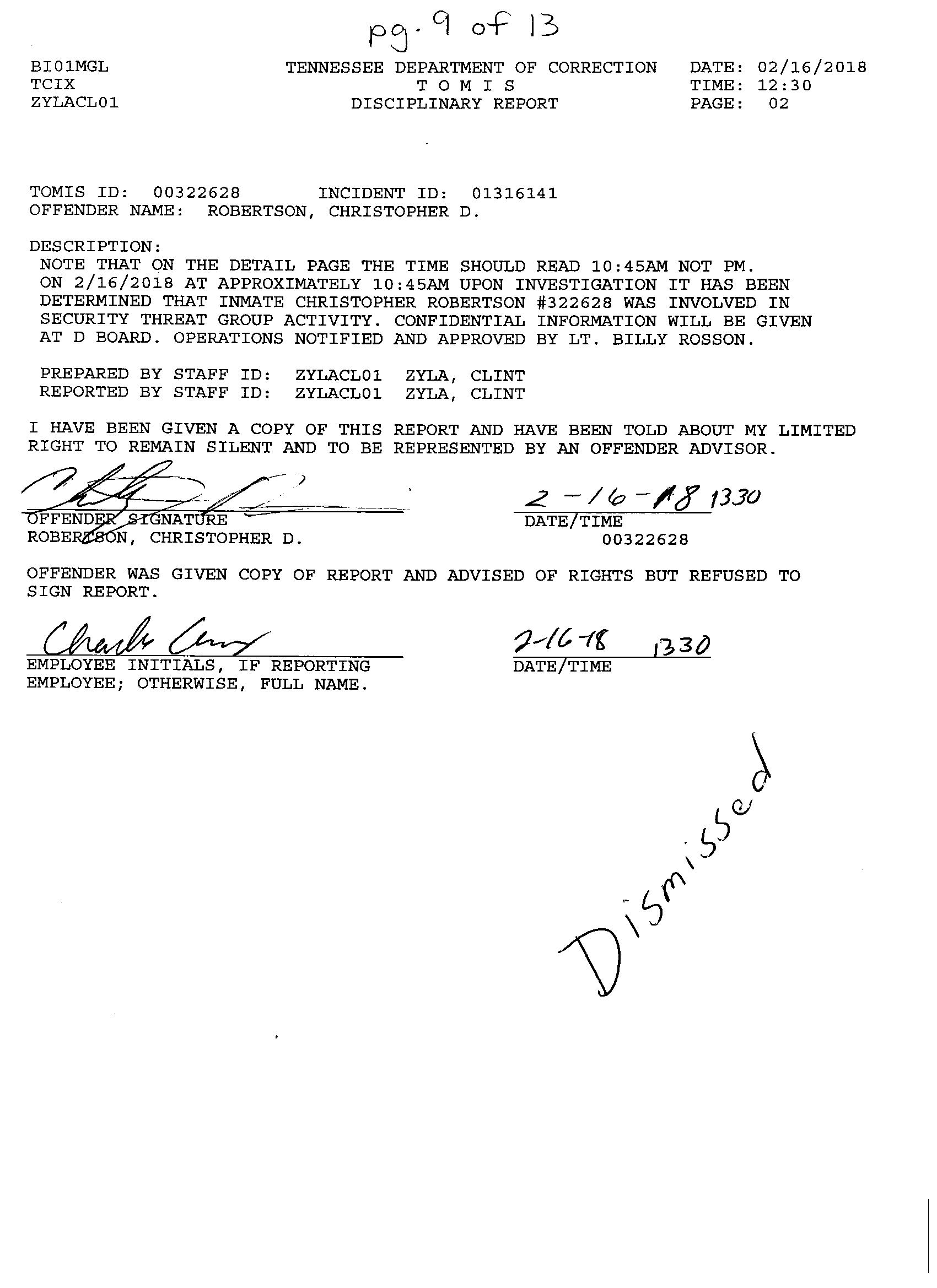 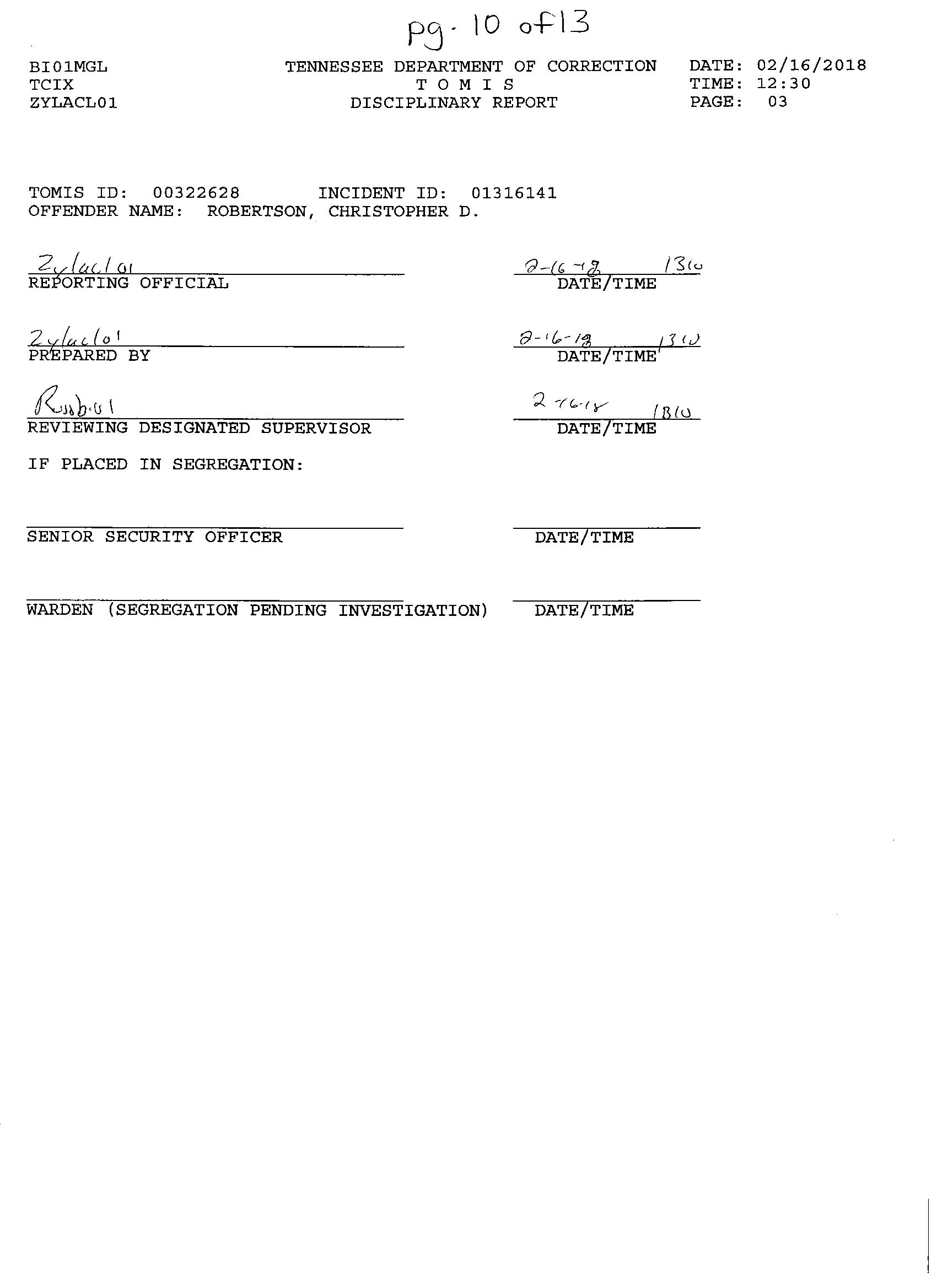 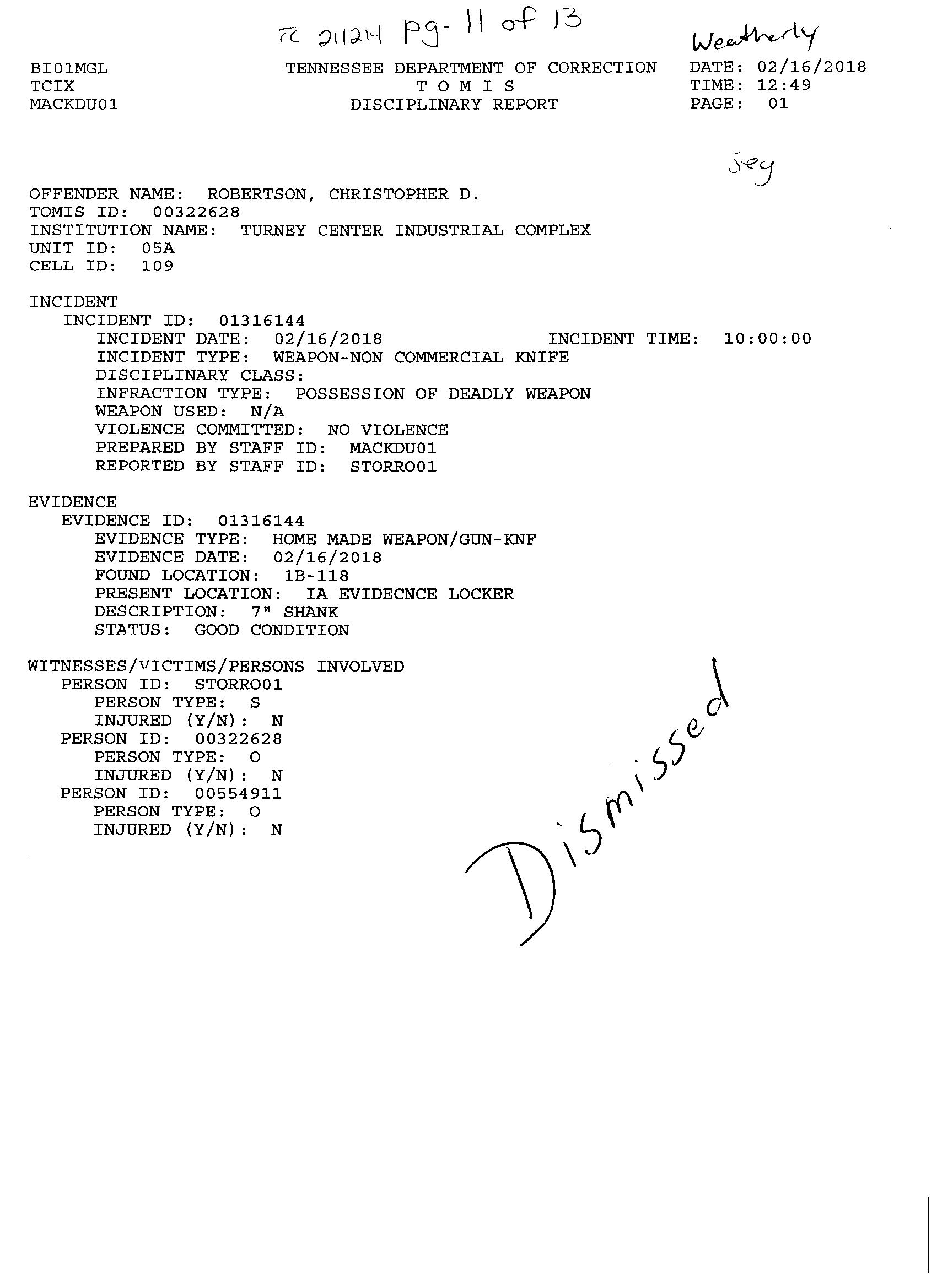 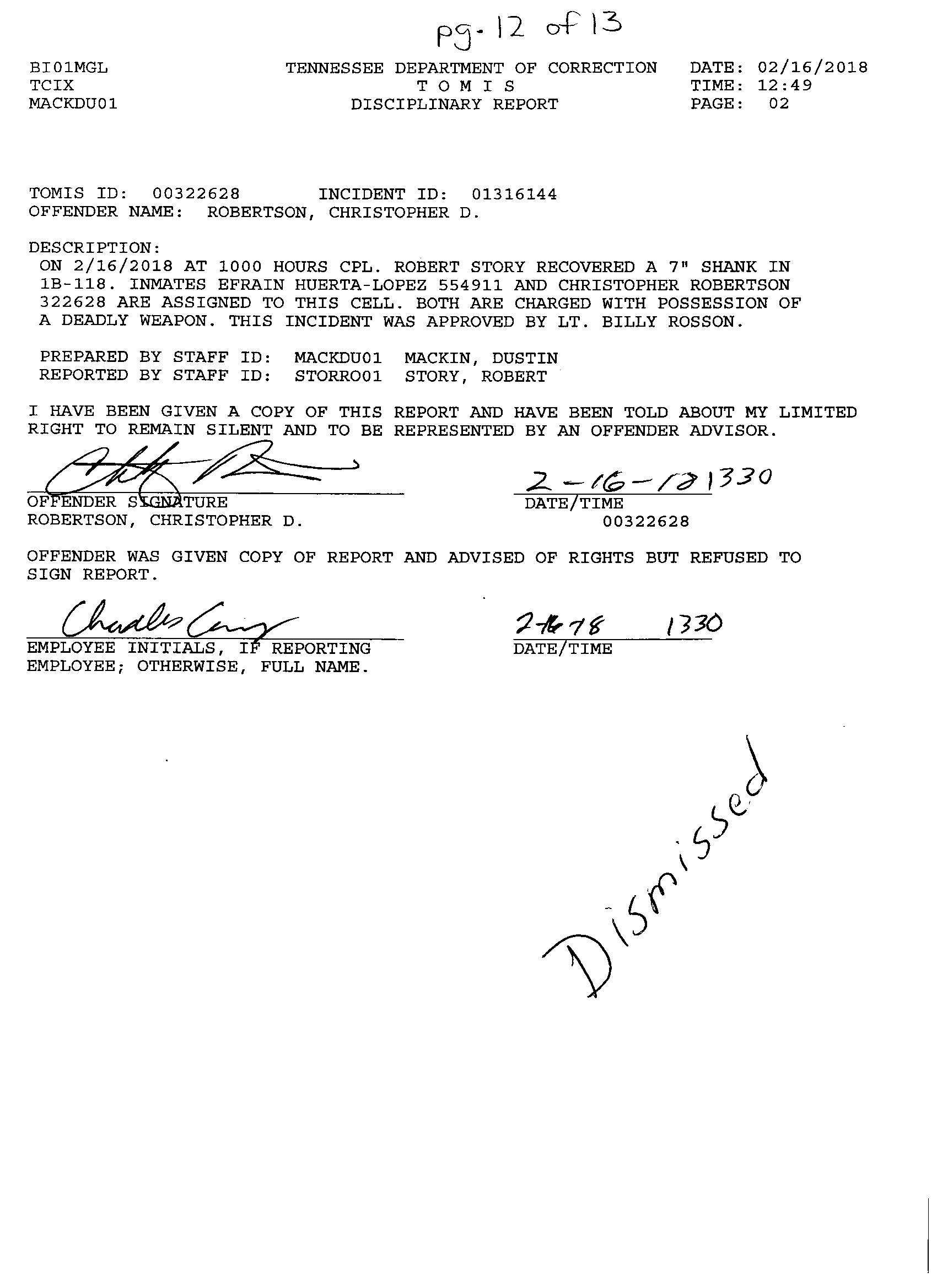 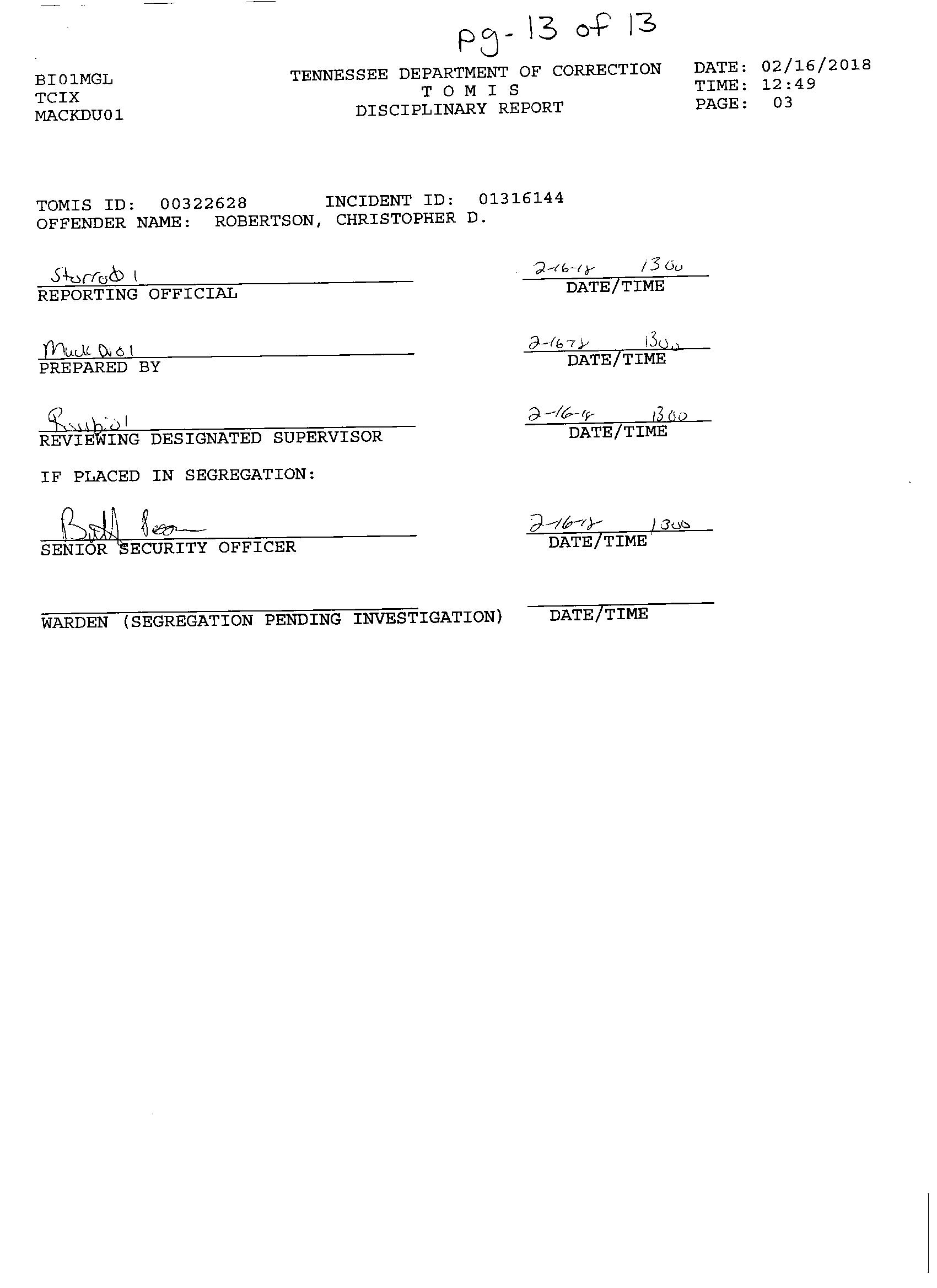