“OUR COUNTRY IS COUNTING ON YOU!”

(Dec. 21, 2018) — On the heels of the U.S. House of Representatives passing a spending bill Thursday night containing $5.7 billion allocated for the border wall which President Trump wants, the chief executive on Friday is urging the Senate to invoke the “nuclear option” to stop a filibuster on the bill and pass it with 51 votes.

The Senate currently consists of 51 Republicans, 47 Democrats, and two independents.  “The ‘nuclear option’ is so named because it involves having a majority of senators change Senate precedents in order to effectively change the rules without the two-thirds that would be required to invoke cloture on changes to the standing rules themselves,” Roll Call explained in its coverage of the issue on Thursday.

On Twitter Trump praised House Republicans, many of whom had already gone home for the Christmas and New Year’s holidays, for returning to Washington to vote affirmatively on the bill, which came together after Republican leaders met with Trump Thursday at the White House.  Trump reportedly stood firm on his demand for border-wall funding, reflected in brief statements given following the meeting by those in attendance.

Although Congress has consisted of Republican majorities in both chambers since Trump was inaugurated, money for a border wall between the U.S. and Mexico has been elusive. In March, after signing a continuing resolution (CR) to fund government operations and boost America’s military, Trump said he would “never do it again” if the CR did not contain funding for a wall.

Congress has until midnight Friday to pass a spending bill before a partial government shutdown will ensue.

During his campaign and throughout his White House tenure, Trump has insisted that a border wall is essential to national security and to reduce the flow of illegal drugs coming into the country from the south.  On Thursday night he praised Republicans for passing the CR with the funding, including a reminder for current Minority Leader Nancy Pelosi of her statement last week during a White House meeting that Trump did “not have the votes” in the House to fund the wall. 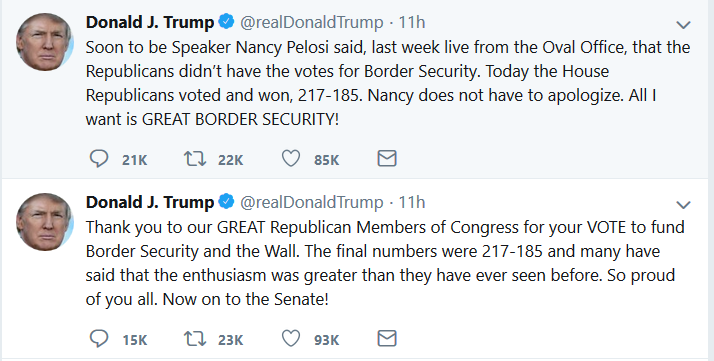 On Thursday, DHS Secretary Kirstjen Nielsen announced a shift in policy, citing Section 235(b)(2)(C) of the Immigration and Nationality Act (INA) which will see that asylum-seekers from America’s south remain in Mexico after filing their applications and as they await adjudication by an immigration judge. Mexico has agreed to the arrangement, Nielsen said, and work visas and humanitarian assistance will be provided as the cases are pending.

It was Montana Senator Steve Daines who first floated the idea of using the so-called “nuclear option” Friday in order to pass the House bill out of the Senate and deliver it to the president’s desk. Trump addressed Daines personally to thank him for making the suggestion.

Trump then urged Senate Majority Leader Mitch McConnell to “use the Nuclear Option and get it done!  Our Country is counting on you!”

At the White House meeting on December 11, Trump told Senate Minority Leader Chuck Schumer that he would take responsibility for the government shutdown if it were to occur. On Friday morning he reiterated that if border-wall funding does not pass both chambers of Congress, a shutdown will begin.

Despite the oft-used term “shut down,” most areas of the federal government remain open even if Congress fails to continue to completely fund all aspects of it. Such attractions as the nation’s national parks, or portions thereof, as well as parts of the IRS and Departments of Homeland Security and Transportation, are expected to be affected.

On Friday morning’s “Fox & Friends,” White House Press Secretary Sarah Sanders said that if a shutdown occurs, the president will not take his planned two-week vacation at his Florida resort, Mar-a-Lago, but instead remain at the White House.