IS THIS THE SAME “EXTRAORDINARY EXCULPATORY INFORMATION” SOLOMON REFERENCED? 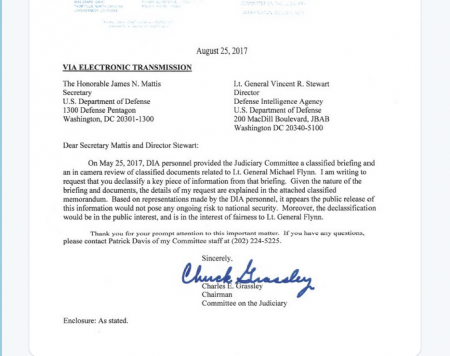 (Dec. 15, 2018) — Early Friday afternoon, Rep. Mark Meadows (R-NC11) tweeted the image of a letter sent by Sen. Charles Grassley to Secretary of Defense James Mattis requesting that he declassify information concerning Trump’s first national security advisor, Lt. Gen. Michael T. Flynn (Ret), who is facing sentencing Tuesday for having admitted to lying to the FBI when it questioned him about his conversations during the transition period with the Russian ambassador.

Flynn served as director of the Defense Intelligence Agency (DIA) from 2012 to 2014, when he reportedly “faced pressure from Director of National Intelligence James R. Clapper Jr.,” according to The Washington Post.

The DIA describes itself as a “combat support agency” within the Department of Defense (DOD).

The letter, written by Senate Judiciary Committee Chairman Charles Grassley on August 25, 2017, asks for “a key piece of information” from a classified briefing by the DIA held three months earlier to be declassified.  “Based on representations made by the DIA personnel, it appears the public release of this information would not pose any ongoing risk to national security,” Grassley wrote. “Moreover, the declassification would be in the public interest, and is in the interest of fairness to Lt. General Flynn.”

On December 1 of last year, Flynn entered a “guilty” plea of lying to the FBI, although the two agents who interviewed him, now-fired former deputy head of counterintelligence Peter Strzok and Joe Pientka, wrote later in a “302” report that they did not detect any deception on Flynn’s part.

On Tuesday Flynn’s attorneys filed a pre-sentencing memorandum with U.S. District Court Judge Emmet Sullivan, who will be presiding over Flynn’s sentencing this coming Tuesday, quoting from the FBI’s “302” in which then-FBI Deputy Director Andrew McCabe was documented as having made a conscious decision not to have the agents inform Flynn that he had the right to have counsel present and that lying to a federal agent is a crime under 18 USC 1001.

Former FBI Director James Comey, who was fired in May 2017, has recently admitted to being the party responsible for sending the two agents to speak with Flynn in an unorthodox and virtually unscheduled setting.

Following the 2016 presidential election, Obama reportedly “warned” Trump not to employ Flynn on his national-security team. “The Obama administration fired Flynn in 2014 from his position as head of the Defense Intelligence Agency, largely because of mismanagement and temperament issues,” NBC reported on May 8, 2017.

Meadows followed up his tweet of Grassley’s letter with, “At a minimum, Judge Sullivan should review these documents in-camera. General Flynn is an American patriot who deserves our thanks–not someone who should fall victim to an incomplete story.”

If Grassley’s letter refers to the same document referenced by The Hill‘s Executive Director, John Solomon, on Thursday, it contains “extraordinary exculpatory information” relating to Flynn, according to Solomon. “In May of 2017, there was a document identified to a small number of people in the United States government; it’s in the possession of the Defense Intelligence Agency,” Solomon said on Thursday night’s edition of “Hannity.”  “For 18 months, there’s been an effort to resist declassifying that document.  I know that that document contains extraordinary exculpatory information about General Flynn.  I don’t believe the president has ever been told about the existence of this document.  One lawmaker discovered it, but he was thwarted by the Defense Intelligence Agency in his ability to disclose it.  I think we all should ask for that declassification; get that out.  It may enlighten the judge; it will certainly enlighten the American public.”