Mueller Rebuttal: FBI Made Conscious Decision Not to Inform Flynn of His Rights

AGENTS WANTED FLYNN TO BE “RELAXED” DURING QUESTIONING 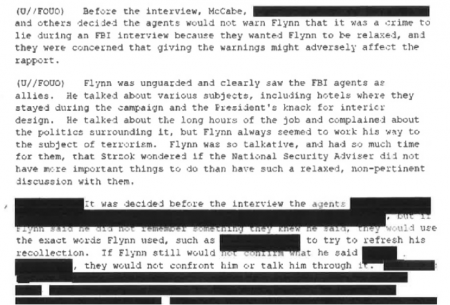 (Dec. 14, 2018) — A report included in a 15-page brief filed with U.S. District Court Judge Emmet G. Sullivan on Friday by the office of Special Counsel Robert Mueller in the case against Trump’s first national security adviser, Lt. Gen. Michael Flynn (Ret), indicates that FBI agents made a conscious decision not to inform Flynn of his right to have an attorney present while they questioned him about his communications with then-Russian ambassador to the U.S. Sergey Kislyak.

The interview with the two agents took place on January 24, 2017, four days into the new administration.

On December 1, 2017, Flynn pleaded “guilty” to one count of lying to the FBI during the interview and “cooperated” with Mueller’s “Russia” investigation by interviewing multiple times and producing thousands of documents, according to his attorneys in their sentencing brief submitted to Sullivan on Tuesday.

The report, known as a “302,” is dated July 19, 2017, nearly six months after now-fired FBI agent Peter Strozk and a second unnamed agent were dispatched to interview Flynn in the West Wing by also-now-fired FBI Director James Comey.

The latter revelation was made by Comey himself in an interview broadcast Sunday with MSNBC’s Nicolle Wallace.

The specific paragraph on page 13 of Mueller’s brief discusses the decision now-fired FBI Deputy Director Andrew McCabe, who is also reportedly under criminal investigation for lying to Justice Department inspector general investigators, made not to inform Flynn of his right to an attorney, as Comey acknowledged would have been standard procedure.  “Before the interview, McCabe, XXXXXXXXXXXXXXXXXXXXX and others decided the agents would not warn Flynn that it was a crime to lie during an interview because they wanted Flynn to be relaxed, and they were concerned that giving the warnings might adversely affect the rapport,” the paragraph reads.

On Tuesday, The New York Times published the brief filed by Flynn’s attorneys where they quoted the wording appearing in the 302.

The mainstream media on Friday focused on Mueller’s response to Flynn’s attorneys’ request for leniency for their client and the suggestion that he was not afforded due process.

On Thursday, John Solomon of The Hill reported on “Hannity” that he has knowledge of a document containing information that he said would exculpate Flynn in the possession of the agency Flynn led under the Obama regime, the Defense Intelligence Agency (DIA).   Solomon’s statement begins at 20:01 here:  https://www.youtube.com/watch?v=HO9ofYzYrXU

Mueller Rebuttal: FBI Made Conscious Decision Not to Inform Flynn of His Rights added on Friday, December 14, 2018

2 Responses to "Mueller Rebuttal: FBI Made Conscious Decision Not to Inform Flynn of His Rights"