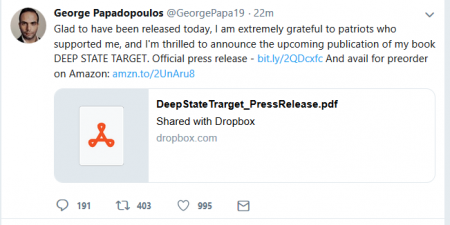 (Dec. 7, 2018) — Late Friday, former Trump campaign adviser George Papadopoulos was released from a federal prison in Wisconsin, where he served 12 days of a 14-day sentence as part of a plea agreement resulting from the FBI’s questioning of him relative to its Russia “collusion” investigation.

Before reporting to prison, Papadopoulos claimed he was “framed in many ways” by government agents and that a half-dozen people he did not know approached him in 2016 while he was living in Europe and working in the energy industry.

The 31-year-old said that the overtures made by the strangers all concerned either the promise of connections with powerful global contacts or the imparting of information, whether accurate or false, that Russians possessed “dirt” on then-Democratic presidential candidate Hillary Clinton.

Papadopoulos had first supported Dr. Ben Carson’s Republican presidential bid but thrown his support behind Donald Trump once he won the final Republican primaries in early May 2016.

The FBI interviewed Papadopoulos twice in 2017 prior to the assumption of its probe by Special Counsel Robert Mueller in May 2017 following the firing of then-FBI Director James Comey.

On Friday evening Papadopoulos said he is happy to have been released from confinement and “extremely grateful to patriots who supported” him.  He also revealed that he has written a book about his 2016 experiences titled “Deep State Target: How I Got Caught in the Crosshairs of the Plot to Bring Down President Trump.”

Startlingly, the online introduction to the book claims that, among other factors, a “rift with former Attorney General Jeff Sessions made him the first target of Spygate, the Mueller Investigation, and the Russian Collusion Hoax.”

Former Secret Service agent and radio host Dan Bongino wrote a book titled “Spygate: The Attempted Sabotage of Donald J. Trump.”  Bongino interviewed Papadopoulos in early November but did not consult with him while writing the book, Bongino said during the interview.