“THESE COUNTRIES AND ACTORS MUST BE EXPOSED” 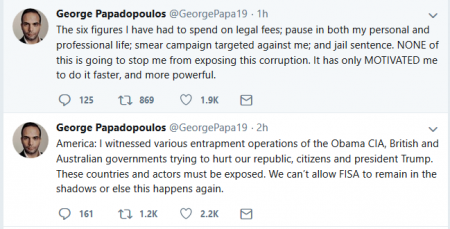 (Nov. 8, 2018) — On Thursday afternoon, former Trump campaign advisor George Papadopoulos continued to tweet about his alleged interactions with elements of the Obama intelligence community and foreign figures in 2016, when the then-28-year-old energy consultant was approached by a number of individuals promising to introduce him to influential Russian industry figures.

Those connections never materialized, he said, and he has recently claimed that he was “entrapped” and “framed” in an apparent U.S. government effort to create the appearance of Russian “collusion.”

Since testifying to members of Congress on October 25, Papadopoulos has been releasing information over Twitter and in radio and television interviews about the Russia narrative, which gave rise to an FBI counterintelligence investigation that a majority of Americans in Tuesday’s exit polls reportedly said they believe is “politically motivated.”

FBI officials have claimed that the agency’s probe into the Trump campaign began on July 31, 2016, but evidence exists suggesting it began considerably earlier. After the Justice Department’s Inspector General found what he believed was evidence of potential misconduct on the part of FBI and DOJ officials during the 2016 campaign cycle, the investigation was transferred to Special Counsel Robert Mueller, himself a former FBI director.

Mueller was tasked with determining whether or not anyone from the Trump campaign had coordinated with the Kremlin to undermine Hillary Clinton’s campaign to win the election for the former businessman. Trump has denied any wrongdoing, and thus far, indictments have focused on alleged Russian “meddling” in the 2016 election and violations of law not associated with the campaign.

Contradicting the common narrative, Papadopoulos claims that the two key U.S. “allies,” Australia and Great Britain, were “colluding with Obama” and FBI officials to ensure that Trump did not become president.  He has cited a meeting in May 2016 which then-Australian ambassador to the UK, Alexander Downer, sought with him while he was living in London and an overture made by Maltese professor Joseph Mifsud, whose attorney now claims was working for the FBI at the time.

In his tweets on Thursday, Papadopoulos claimed that he has “witnessed various entrapment operations of the Obama CIA, British and Australian governments trying to hurt our republic, citizens and president Trump.” Further, he wrote, “These countries and actors must be exposed. You can’t allow FISA to remain in the shadows or else this happens again.”

Another energy consultant and volunteer Trump campaign advisor, Dr. Carter Page, is now known to have been the subject of four successive FISA warrants between October 2016 and September of last year based on his business dealings in Russia. Page was never charged with a crime and has said that neither FBI agents nor Justice Department officials have requested to interview or depose him.

Just over a week ago, Papadopoulos tweeted that he, too, was the subject of a FISA warrant which has not yet been revealed.

In contrast with Page’s treatment, Papadopoulos was questioned by the FBI twice in 2017 and accused of lying to agents, later accepting a plea deal encompassing prison time, a fine, and community service.  Papadopoulos recently told Fox & Friends co-host Brian Kilmeade that he accepted the plea agreement in “a chaotic moment” which he is now reconsidering in consultation with his new legal team.

Papadopoulos also told Kilmeade that his wife, a legal immigrant from Italy, has been unable to work given that the processing of her work permit has been delayed “because she spoke out in my defense.”

In some instances, Papadopoulos addressed him directly to “America.” 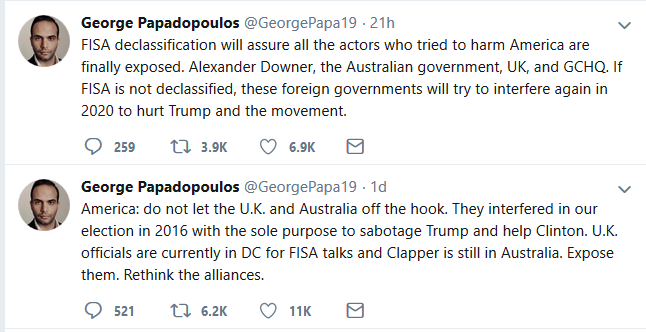 Thus far, approximately 20 pages of classified documentation designated by President Trump for public release still remain in the custody of the Justice Department Inspector General for review. At a dramatic press conference on Wednesday responding to the 2018 midterm election results, when asked, Trump said he would be revisiting the declassification of the documents associated with the Page warrants in the very near future.

Despite the hardships he described, Papadopoulos said, “NONE of this is going to stop me from exposing this corruption. It has only MOTIVATED me to do it faster, and more powerful.”

An hour later, Papadopoulos tweeted of the alleged anti-Trump conspirators, “These countries and actors must be exposed.”