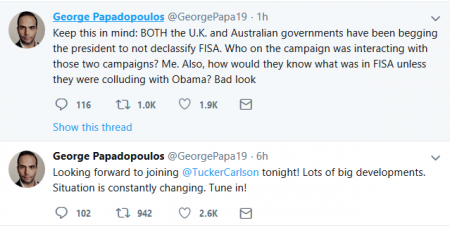 (Oct. 29, 2018) — Shortly after 5:00 p.m. EDT on Monday, former Trump campaign adviser George Papadopoulos, who accepted a plea deal last year for lying to the FBI but may withdraw it, tweeted that “the U.K. and Australian governments have been begging the president to not declassify FISA.”

Papadopoulos was referring to approximately 20 pages submitted to the Foreign Intelligence Surveillance Court (FISC) beginning in October 2016 to obtain permission to conduct surveillance on then-Trump campaign adviser Carter Page.  The 20 pages remain classified, while over 400 pages of documentation presented to the court were released to Judicial Watch after it filed a lawsuit for them.

The primary “evidence” used to convince the court that surveillance of an American citizen was necessary was a “dossier” compiled by former British intelligence agent Christopher Steele at the behest of Fusion GPS, who contracted him on behalf of the DNC and Hillary Clinton campaign.  The court was not advised that the dossier was a product of political opposition research.

Carter has not been charged with a crime and told Fox News’s Sean Hannity several weeks ago that no one from the Justice Department nor FBI has ever contacted him about his dealings with Russia.  Page unsuccessfully sued a media conglomerate for allegedly defaming him and has since filed suit against the DNC for the same reason.

Papadopoulos was said by The New York Times in December to have been the catalyst of the FBI’s counterintelligence probe into the Trump campaign, a highly unusual move and one which many Republican members of Congress believe was politically-motivated.

The 31-year-old energy consultant was said to have claimed that the Russians had “dirt” on Hillary Clinton, allegedly leading the FBI to open its probe focusing on whether or not anyone in the Trump campaign was “colluding” with the Kremlin.

Trump has repeatedly said that there was “no collusion,” and until recently, frequently decried the investigation, assumed last year by Special Counsel Robert Mueller  as “a witch hunt.”

Further, Papadopoulos asked rhetorically, “Who on the campaign was interacting with those two campaigns?  Me.  Also, how would they know what was in FISA unless they were colluding with Obama?  Bad look” [sic].

Last month, Trump pledged to release the 20 classified pages but tweeted three days later that he would have the DOJ’s inspector general review them before making them public. Trump additionally said that certain U.S. “allies” objected to their release, which NBC News reported was for “national security” reasons.

At the time, Trump declared that text messages exchanged between then-FBI Director James Comey and those in his circle be made public as well as FBI interview reports on DOJ official Bruce Ohr, who appears to have been actively engaged in procuring and disseminating information from the “dossier.”

Since testifying to two congressional committees last Thursday, Papadopoulos has drawn connections among Ohr’ Steele; a Maltese professor, Joseph Mifsud; and former Australian ambassador to the UK Alexander Downer.  The latter two sought out Papadopoulos while he was developing an energy-consulting business in Europe, with Mifsud meeting with Papadopoulos in Rome and Downer in London.

On Friday morning, Papadopoulos told Fox & Friends co-host Brian Kilmeade that looking back, he now believes he was “framed in many ways” and should not have to face a sentence given the government’s disingenuousness.

There remain issues about his prosecution and the Trump-Russia probe he cannot divulge publicly, Papadopoulos said.

He will be a guest on “Tucker Carlson Tonight” at 8:00 p.m. EDT on the Fox News Channel.