“I WAS FRAMED IN MANY WAYS” 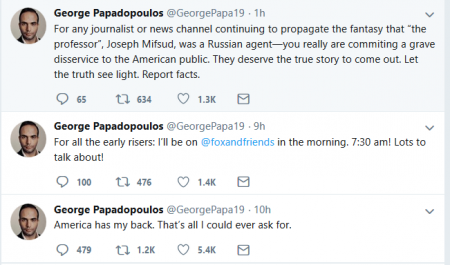 Shortly before going on-set, Papadopoulos announced his upcoming appearance on Twitter and issued a statement to “any journalist or news channel continuing to propagate the fantasy” that an individual who interacted with him in 2016, Joseph Mifsud, “was a Russian agent.”

During his ten-minute interview with Kilmeade, Papdopoulos clarified that Mifsud was, in fact, working for the FBI at the time he sought him out and apparently planted information that Russian agents had possession of an undetermined number of Hillary Clinton’s missing emails from her private server used while she was secretary of state.

Papalopoulos said he is “considering withdrawing” his “guilty” plea taken last year for lying to the FBI during questioning about whether or not anyone from the Trump campaign committed “collusion” with the Kremlin to help Trump win the election.  The plea deal includes 14 days in prison, a $9,500 fine, and 200 hours of community service.,

“I was framed in many ways,” Papadopoulos told Kilmeade.

Republican members of the U.S. House Intelligence Judiciary Committees have indicated that no intelligence has yet been identified as justification for the FBI’s launching of a counterintelligence investigation into the Trump campaign in 2016.

Papadopoulos was an unpaid consultant to the Trump campaign in 2016, as was Carter Page, mentioned later in the interview and the subject of four FISA surveillance warrants applied for between October 2016 and June 2017..

Papadopoulos said that in early May 2016, he was working with the Israeli energy sector in an effort to market its products in Greece when he gave an interview to The Times of London critical of then-UK Prime Minister David Cameron for having reportedly referred to Trump in denigrating terms.  The 31-year-old then said that following the interview, “that’s when my life completely turned upside-down.  I was being followed in London; I had officials from the U.S. Embassy, which seemingly were intelligence officials, reaching out to me.  [Then-Australian ambassador to the UK] Alexander Downer wanted to meet, and it was at that meeting with Alexander Downer where essentially he told me, ‘You better stop bothering David Cameron and you better tell Trump to stop bothering him, too.'”

Kilmeade responded by pointing out that Downer had been a significant donor to the Clinton Foundation run by Hillary, former President Bill, and daughter Chelsea Clinton reportedly under FBI investigation for allegedly engaging in a “pay-to-play” operation involving Hillary’s position at State.

Kilmeade then asked the role of Mifsud in implicating Papadopoulos in the Russia “collusion” narrative which continues to be investigated by Special Counsel Robert Mueller. Mueller was brought in a week after FBI Director James Comey was fired in May 2017 by Deputy Attorney General Rod Rosenstein, who signed the fourth and final FISA application on Page.

“Joseph Mifsud was the professor — this Maltese professor — who dropped the information on me about the Russians having Hillary Clinton’s emails.  We meet in Rome, and I never quite understood exactly why I was meeting this person at this university in Rome through my old company, which I now found out is some sort of some Western intelligence front group, which I didn’t know at the time.” Papadopoulos said.

He added that the meeting now “seems completely orchestrated.”

He then revealed that a lawyer representing Mifsud has recently “went public” to say that his client “is not a Russian agent,” but rather, was “working at the behest of the FBI when he was talking with Papadopoulos…now, unless his lawyer is slandering his client and he’s awaiting a massive lawsuit for libel, I’m not sure that he’s lying.”

Kilmeade said that Downer then met with Papadopoulos “a few days later,” asking him what he knew about Clinton’s emails.  Papadopoulos said he “didn’t remember” talking to Downer about the emails, but that assuming it to be true, “it seems completely suspicious that a week or so after Joseph Mifsud drops this information on me –“

“Unsolicited,” Papadopoulos continued, “that Alexander Downer apparently wants to figure out info on this particular topic.  It just seems that it was some sort of sting operation gone bad, to be quite with you.”

“The word is that Downer taped that conversation,” Kilmeade said, with which Papadopoulos did not take issue.  However, he wondered why the FBI did not interview him until January 2017 when his interaction with Downer took place in May the year before.  “It makes absolutely no sense,” Papadopoulos said.

He added that his business has come to a halt given travel restrictions imposed by the Justice Department and said it has been difficult for  his wife.

“Who framed you?” Kilmeade later asked.  “As I stated, all my contacts were completely in the Middle East, in Israel, in particular and in Europe.  I had absolutely no contacts in Russia,” Papadopoulos responded. “Just given that, how on earth could a man like me be at the center of a Russia conspiracy unless I was completely framed by Western intelligence to make it seem that Papadopoulos was interacting with Russians and that he’s the patsy that started this whole investigation?”

Papdopoulos then invoked the “insurance policy” referred to in text messages exchanged between former FBI employees Peter Strzok and Lisa Page in the event that Trump one of the presidency.

Both were heavily involved in the investigation into Hillary Clinton’s use of a private, unauthorized email server during her tenure as Obama’s Secretary of State and the Russia “collusion” probe allegedly opened just after the Clinton investigation concluded in late July 2016. Strzok was the second-in-command in the counterintelligence unit of the FBI, while Lisa Page served as Counsel to the Deputy Director, who then was now-fired Andrew McCabe.

McCabe is reportedly under grand jury investigation for allegedly lying to the Justice Department’s inspector general about leaks to the media. Through his attorney, former DOJ Inspector General Michael Bromwich, McCabe has denied all wrongdoing.

Kilmeade then asked Papadopoulos if he believes that he, too, was the subject of one or more Isa warrants, to which Papadopoulos responded, “I don’t have real evidence yet about that, but let’s just say that after my testimony yesterday, I’m starting to believe that more and more and more.”

When asked, Papadopoulos said that he took a guilty plea in “a chaotic moment” which he is reviewing with new counsel.  “We’re actively looking into new options and possibly withdrawing from this agreement right now.”

Papadopous has said on Twitter and told Kilmeade that he “wants” to provide public testimony “to use this experience as part of my patriotic duty to really give back to this country, to expose corruption and to assure that nothing like this ever happens again to an American citizen.”

In closing, Kilmeade stated that “If they launched the Mueller probe because of your conversation, it is a complete, total sham.”

“I have to agree with that,” Papdopoulos responded.