AMID STUNNING CLAIMS OF “SABOTAGE” BY U.S. ALLIES

(Nov. 6, 2018) — Very early Tuesday morning, former Trump foreign-policy advisor George Papadopoulos tweeted that he has begun to receive death threats which he attributes to his contention that classified documentation held by the Justice Department pertaining to surveillance of American citizens associated with the 2016 Trump campaign could soon be made public.

On September 18, President Trump ordered the approximately 20 pages of classified documents reviewed by the intelligence community and promptly declassified. However, three days later, Trump reversed course. tweeting that he had asked the Justice Department’s Inspector General to review the documents for declassification, in part because of the objections of “allies” to releasing it.

“…the exposure of the attempt by Australia and the U.K. to sabotage Trump is near,” Papadopoulos included in his early-morning tweet.

Australia, the UK, Canada, New Zealand, and the U.S. are part of an intelligence compact termed the “Five Eyes” which share information on worldwide threats on a regular basis.

Between October 2016 and June 2017, four such surveillance warrants were requested and granted by the Foreign Intelligence Surveillance Court (FISC) on Dr. Carter Page, an informal foreign-policy advisor to the Trump campaign. The warrant applications were signed by Justice Department or FBI officials who submitted as evidence for the need for surveillance the now-infamous Russia “dossier.”

The dossier was assembled by former British intelligence agent and FBI source Christopher Steele, who was hired by the political-research company Fusion GPS. The actual customer, however, was the Democratic National Committee (DNC) and Hillary Clinton campaign.

The contents of the dossier have never been verified, and approximately 20 pages have been withheld from the public after 412 pages were released to the government-watchdog group Judicial Watch after it filed suit for them.

On October 25, Papadopoulos testified to members of the House Judiciary and Oversight & Government Reform Committees behind closed doors. Although not able to reveal the substance of those conversations, Papadopoulos has since been tweeting regularly about the apparent FBI dragnet into which he was pulled in 2016 and 2017, resulting in his accepting a “guilty” plea for lying to the agency about the timing of his alleged contacts with Russians during the 2016 presidential campaign cycle.

Papadopoulos now says he was “framed in many ways” and has since learned that the FBI did not share exculpatory information with him during his interviews, prompting him to reconsider his plea agreement. He additionally has reported that in 2016, high-level British and Australian government officials were working assiduously to thwart Donald Trump’s presidential ambitions.

Papadopoulos first served as an advisor to Republican presidential candidate Dr. Ben Carson. After Trump won the Republican primaries in early May 2016, Papadopoulos decided to support the presumptive party nominee and was announced as a member of Trump’s foreign policy team that month.

During the spring of 2016, Papadopoulos was living and working overseas building a business as an energy consultant. He is said that he believes he was targeted because of his “pro-Israel” stance in marketing that nation’s energy products to the government of Cyprus.

In recent television and radio interviews, Papadopoulos has said that he was approached by no fewer than a half-dozen individuals during that time, all of whom he now believes were working for or were connected to the FBI. He said he was promised introductions to what could be valuable business acquaintances, particularly in Russia; wined and dined; and that he was the object of advances by women who he believes were set up as decoys and/or FBI informants.

He believes many, if not all, of his conversations with the individuals were recorded and that transcripts of at least some of them exist.

Even more shocking, Papadopoulos has claimed that the UK and Australian governments were attempting “to sabotage” the Trump campaign by “colluding with Obama.”

Papadopoulos also said he was given $10,000 in cash by a man he believes was acting as “a spy” and has offered to make the cash available to Congress in order to trace its origin. “Whoever authorized that $10,000 is about to get a rude awakening once the oversight committee gets a hold of it shortly. They are traceable bills and very very sensitive,” Papadopoulos tweeted early Tuesday morning.

He described the meeting with Charles Tawil in a hotel room in Israel in the summer of last year on his radio appearance Friday morning on the Dan Bongino Show.

On Monday, Papadopoulos tweeted that not only was Carter Page the subject of DOJ/FBI FISA warrants, but also Trump’s first national security advisor, Lt. Gen. Michael T. Flynn (Ret); short-term Trump campaign Director Paul Manafort, who is now in federal prison convicted on eight counts unrelated to the campaign; and Papadopoulos himself.

He has called the Russia open collusion” narrative, which prompted not only an FBI investigation, but its continuation by the hiring of Special Counsel Robert Mueller and his team, a “fake narrative.”  “Two years of pausing mine and my wife’s personal and professional life; six figures spent on legal fees; a fake narrative created to lie to Americans about me, campaign and POTUS, all for the sake to cover up a true scandal, SPYGATE,” he tweeted, invoking the name of Bongino’s New York Times bestseller about “the attempted sabotage of Donald J. Trump.” 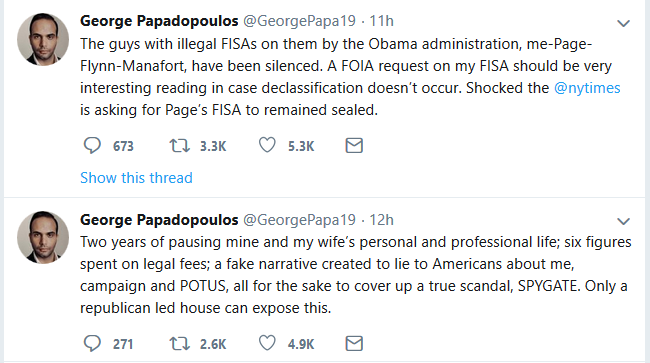