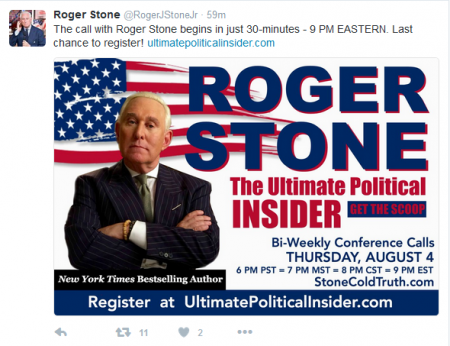 (Oct. 27, 2018) — On Thursday, The Post & Email released the first segment of an initial conference call conducted by host Jason Sullivan and political commentator, strategist and author Roger Stone on August 4, 2016.

The series of conference calls took place every other Thursday between August 4 through mid-October 2016 and were intended to advocate for Donald Trump’s strengths as a presidential candidate from Stone’s perspective.  A longtime Trump acquaintance and informal adviser, Stone began his career as a political aide to Richard Nixon and went on to advise ten presidential campaigns.

At the time of the conference calls, Stone self-identified as a Libertarian.

On September 1, 2016, Stone tweeted that his communication software had been “hacked” and that the conference call scheduled for that evening would not take place.

The first segment we presented Thursday introduced Stone to the audience; touched on the area of men’s fashion, on which Stone often offers advice; provided a platform for Stone to air his grievances against the Clintons and the Clinton Foundation and briefly mention WikiLeaks founder Julian Assange.

In the second segment embedded below, Sullivan began reading questions submitted prior to the call via a process announced by Stone on his then-Twitter feed.  Stone’s Twitter account was shuttered permanently last year.

The questions touched on a rumor that Trump would withdraw from the race; WikiLeaks’ obtaining of emails it released from the Democratic National Committee (DNC) and Clinton campaign manager John Podesta’s account; and whether or not Russia was the source of the emails.

For his part, Assange has insisted that no “state party” was the source of the DNC and Podesta emails released by his organization.

Currently the mainstream media is focused on whether or not Special Counsel Robert Mueller has found evidence that Stone had prior knowledge of the content of the emails WikiLeaks would release which proved damaging to Hillary Clinton’s campaign.  Stone has rebutted a myriad of media reports for allegedly misquoting him or omitting crucial information about any knowledge he may or may not have had of the emails.

Stone has taken issue with some of the results of Mueller’s probe, which is also examining any possible “Russia” ties among Trump associates, including Stone.

Stone has been a frequent guest on national television and at private events to discuss current politics, particularly what he sees as Donald Trump’s unique political successes.  He is a strong opponent of the Bushes, the Clintons, public corruption, and the entrenched “political establishment” and a fan of martinis and “fine cigars.”