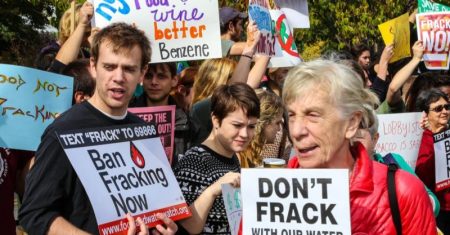 (Oct. 18, 2018) — The anti-fracking folks are trying a slick new strategy in Colorado. Instead of banning fracking they just make it impossible. In fact they make pretty much all oil and gas development impossible, which sounds more like the radical “leave it in the ground” greens. But the focus seems to be fracking, because being new, it is the scariest and people are sure being scared.

The trick is called “buffer zones,” which means areas where drill rigs cannot work so nothing can be found or produced. Colorado already has 500 foot diameter buffer zones around every house and 1000 footers around things like schools and hospitals.

Now comes Proposition 112, which is on the November election ballot. This hummer does three bad things. First it extends the buffer zone to 2500 feet, which around a house is a whopping 25 times bigger circle.

Second it adds these big buffer zones to natural features like “intermittent streams” which pretty much cover the state completely. After all, every time it rains hard the water has to run off in a temporary stream and it rains everywhere, right? Note that these stream buffer zones are not circles. They are honking rectangles almost a mile wide and as long as the so-called stream. Note that intermittent streams are not there most of the time, but their huge buffer zone is, perhaps waiting for rain.

To top this insanity off, local governments are allowed to make even bigger buffer zones, as big as they like. If two jurisdictions overlap then the bigger buffer rules.

Estimates are that fully 85% of the private land in Colorado will be closed to oil and gas exploration under Prop 112. That is more than enough to destroy the industry, but if “intermittent stream” is interpreted broadly enough it could well be 100%. As I said, it rains everywhere.

Note that neither the U.S. EPA nor the State of Colorado is proposing this nonsense, because there is no science to support it. So the greens are trying to scare the voters into passing it, thereby bypassing the responsible government agencies.

Of course the greens have tons of pseudoscience on their side. The foundation of the scare is a huge March 2018 report from the Physicians For Social Responsibility (PSR), a well known green group. The PSR report has this appropriately menacing title:

“Compendium of Scientific, Medical, and Media Findings Demonstrating Risks and Harms of Fracking”

What the infamous IPCC reports are to the climate change scare, this PSR report is to the Fracking scare. Like the IPCC reports, it is mostly just speculation. There are all sorts of speculative “risks” but very few actual harms, and these harms are mostly well known oil and gas industry accidents that have nothing to do with fracking.

That there is no actual science supporting these industry crushing monster buffer zones, does not deter the greens one bit (does it ever?). The leading green organization pushing Prop 112 is Colorado Rising. (Rising from or to what we do not know.)

ABOUT COLORADO RISING AND PROPOSITION 112

A GROWING BODY OF PUBLIC HEALTH RESEARCH SHOWS THAT LIVING TOO CLOSE TO FRACKING OPERATIONS, ESPECIALLY LESS THAN 1/2 MILE, IS A SERIOUS RISK TO HEALTH AND SAFETY.

This is purely and simply a lie, but it is well masked by the impenetrable PSR report. PSR has even produced a 4 page special report for Colorado, highlighting some local studies. None looked at measures of proximity such as 500 feet versus 2500 feet. Some even looked at differences between counties.