SAUDIS PLEDGE SUPPORT FOR INVESTIGATION, BUT WILL IT YIELD ANSWERS? 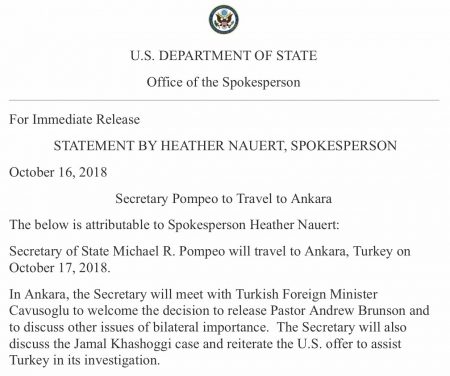 (Oct. 16, 2018) — Following meetings on Tuesday with Saudi Arabian officials, U.S. Secretary of State Mike Pompeo will meet Wednesday with Turkish officials regarding an investigation launched into the disappearance and presumed death of Saudi journalist Jamal Khashoggi.

The announcement was made by State Department spokeswoman Heather Nauert earlier on Tuesday.

Regarding his meetings in Riyadh about Khashoggi and other matters of mutual concern, State reported that “The Secretary and the Crown Prince agreed on the importance of a thorough, transparent, and timely investigation that provides answers.”

Photos of Pompeo’s trip to Riyadh are posted on State’s Twitter feed.

Khashoogi was last seen publicly on October 2 walking into the Saudi Embassy in Ankara, Turkey to obtain documentation necessary for him to marry his Turkish fiancée. For more than a year, Khashoggi had been residing in the United States, where he wrote a column for The Washington Post.

Khashoggi was known to be critical of the Saudi government over his lengthy career as a reporter, editor and commentator in Arab media. He reportedly left the Kingdom after falling into disfavor with the Royal family.

On Monday evening, CNN reported that its sources said that after first denying any involvement with the journalist’s disappearance, the Saudis were prepared to say that his death came about as a result of an interrogation inside the embassy gone wrong. Thus far, however, news reports do not indicate that the Saudis made such an admission during Pompeo’s meetings on Tuesday.

The Saudi government continues to say it has no knowledge of what happened after Khashoggi entered the embassy, President Trump said for the second time on Tuesday.  However, it has reportedly pledged support for an investigation, which Turkish officials have already launched.

The Post has called for an “independent investigation” into Khashoggi’s disappearance involving a coalition of international partners, perhaps coordinated by the United Nations.

On Saturday, Trump indicated that there could be severe consequences if Saudi Arabia were involved in Khashoggi’s disappearance and/or demise, although Trump suggested that sanctions would be other than canceling a large Saudi order of U.S. military equipment.

The Guardian has assigned blame for Khashoggi’s disappearance to Trump’s approach toward the Saudis, while some members of Congress have said they will advocate for severe sanctions against the Kingdom if the facts lead to its involvement.

Nothing has yet been presented publicly to support Turkey’s claim that Khashoggi was murdered inside the embassy and the evidence swept away.

A number of U.S. corporations have withdrawn from an international financial conference to be held in Riyadh next week, including Google, MasterCard, Ford and JP Morgan.  As of this writing, U.S. Treasury Secretary Steven Mnuchin is still planning to attend, The Hill reported.

On Sunday, President Donald J. Trump directed me to travel to Saudi Arabia to impress upon Saudi Arabia’s leadership that it is essential to determine what happened to Jamal Khashoggi. Today, I met with King Salman, Crown Prince Mohammed bin Salman, and Foreign Minister al-Jubeir and did just that.

We had direct and candid conversations. I emphasized the importance of conducting a thorough, transparent, and timely investigation, and the Saudi leadership pledged to deliver precisely on that.

This evening, the President called the Crown Prince, who conveyed that a serious and credible investigation is already underway. He pledged that the work of the Saudi public prosecutor will produce a full and complete conclusion with full transparency for the world to see.

During each of today’s meetings the Saudi leadership strongly denied any knowledge of what took place in their consulate in Istanbul.

My assessment from these meetings is that there is serious commitment to determine all the facts and ensure accountability, including accountability for Saudi Arabia’s senior leaders or senior officials.

The President has asked me to travel to Turkey to meet with senior leaders. We will remain in close contact with Saudi and Turkish authorities as they complete this process and ultimately announce their findings.

Pompeo to Meet with Turkish Officials about Saudi Journalist added on Tuesday, October 16, 2018