DO THE DOCUMENTS SHOW THAT THERE WAS NO “‘THERE’ THERE?” 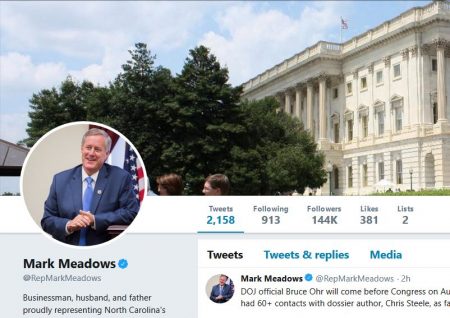 (Oct. 11, 2018) — On Thursday’s “Hannity,” Freedom Caucus founder Rep. Mark Meadows said that “It’s about time that Bob Mueller finish the investigation,” referring to the Trump-Russia “collusion” probe launched by the FBI more than two years ago and assumed by Mueller in May 2017.

In an interview with Fox & Friends Thursday morning, Trump praised Meadows as one of a number of Republican congressmen who have been demanding documents from the Justice Department associated with its surveillance of Carter Page, a Trump campaign adviser.

The surveillance lasted approximately a year, but Page was never charged with any wrongdoing.  Over the last year, documents Justice has released appear to show that an unverified “dossier” compiled through political means and motivation was the only evidence presented to the FISA court to justify the warrants.

The 35-page dossier was commissioned by the DNC and Hillary Clinton campaign, using an opposition research company, Fusion GPS, as an intermediary to hire former British intelligence agent Christopher Steele.

Steele expressed an animus toward Trump and leaked information about his work on the dossier to the media in violation of his agreement to act as a confidential human source for the FBI.  Steele also met with Justice Department official Bruce Ohr, who fed dossier information to the FBI as if it were verified.

For the first time in several weeks, Trump referred to the “collusion” investigation as “a witch hunt” when speaking with the three Fox & Friends co-anchors.  Trump has often railed against the probe on Twitter and denied that anyone in his campaign had connections to the Kremlin.

Another of Hannity’s guests during the segment, investigative reporter Sara Carter, said that she is “hearing behind the scenes” that Deputy Attorney General Rod Rosenstein, who hired Mueller to oversee the Russia investigation after FBI Director James Comey was fired, will depart the Justice Department.

Many see Rosenstein as compromised given that he signed the fourth and final Page FISA warrant application and has reportedly stalled the release of thousands of documents over the last 18+ months.

Trump had said he would declassify a 20-page segment of the Page warrant applications not yet made public but then rethought his decision, stating that he handed the documentation to the Justice Department’s inspector general for an independent review.

After a New York Times article last month alleged that Rosenstein planned to secretly record Trump and garner support for an attempt to remove him from office, Trump stated he has no plans to fire Rosenstein. On Monday, Rosenstein accompanied Trump on Air Force One on a flight to Orlando, where Trump addressed a conference of police chiefs.

Although Trump has spoken highly of Rosenstein since The Times‘s article was published, some observers have suggested that Rosenstein will depart one way or another by the end of the year.  Attorney General Jeff Sessions, who recused himself from all matters involving Russia and the 2016 election based on his support of Trump during the campaign, is also widely expected to leave.

Reporter John Solomon joined the Hannity segment, stating that in May of last year, Justice Department officials knew there “was no case” as to Trump and collusion with Russia but worked to make it appear that the investigation was well-founded.  Solomon has been aggressively reporting on developments in the “Russia” investigation for more than a year.

Meadows insisted that although he believes Trump is being “cautious” about declassifying the 20 FISA pages, they should be released prior to the midterm elections.

House Intelligence Committee Chairman Devin Nunes echoed that opinion on Sunday with host Maria Bartiromo. Previously, Nunes said that the 20 pages represent the “insurance policy” former counterintelligence agent Peter Strzok said would be in place in the event of a Trump victory in November 2016.

In an email to his then-FBI colleague and paramour, Strzok appeared to admit early on that in regard to anyone from the Trump campaign “colluding” with Russians, “There’s no big ‘there’ there.”

Strzok and colleague Lisa Page’s communications are among those Trump had planned to declassify.

2 Responses to "Congressman Calls for Mueller to Wrap Russia Probe"