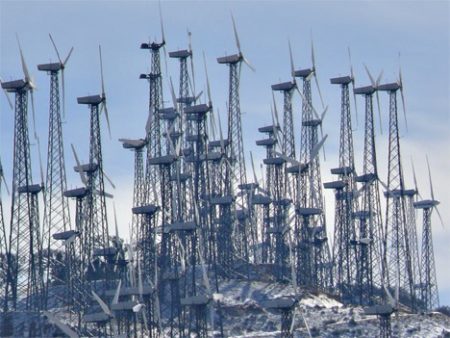 (Oct. 5, 2018) — The Colorado Public Utilities Commission (PUC) recently approved a Colorado Energy Plan that attempts to substitute wind power for coal power. CFACT has petitioned the PUC to reconsider this ill-advised decision. Included below are some excerpts from the CFACT petition.

Others are encouraged to comment as well. The PUC comment system is here. To get to the comment entry form, check the “expressing an opinion” box on the first screen, then “electric” on the second screen, then “Public Service Company or Xcel” on the next, and finally select “16A-0396E – Proceeding to Approve the 2016 Electric Resource Plan and the Colorado Energy Plan“. You can then enter your comment, including attachments.

The Energy Plan basically calls for two coal fired units, with 660 MW of combined generating capacity, running at the Comanche Power Plant in Pueblo County to be retired prematurely and replaced with several wind farms. While many states have mandated the use of some renewables, Colorado is the first to propose actually replacing coal power with wind. This cannot work as planned, so it is a very bad precedent.

There are three major areas of concern, namely (1) risky bids, (2) the apparent lack of fair competition and (3) the risk of prolonged blackout under low wind, peak demand conditions. Each of these concerns is outlined below.

Here are CFACT’s three specific requests (as explained briefly below):

1. We respectfully request that PUC staff and Public Service conduct diligent analysis of each low bidder’s ability to perform the projects they propose. In addition, they should develop adequate contingency plans that allow for failure to perform.

2. We respectfully request that PUC staff investigate whether Pueblo County was wrongly favored in the Public Service competitive bidding process.

3. We respectfully request that PUC staff and Public Service conduct a detailed contingency analysis of the reasonably possible cases of peak demand with low wind speeds. The approved plan must provide reliable reserve capacity to properly serve these cases.

Brief discussion of the issues follows (there is more in the Petition itself).

The PUC decision (No. C18-0761) says this: “We note that the wind bids are exceptionally low as compared to the pricing information provided in Public Service’s previous wind resource proceedings. Because the bidders have risen to the occasion and provided extremely low bid prices, Public Service can take advantage of exceptional prices for new resources without risking that such cost-competitive resource alternatives are unavailable in another ten years.” (Emphasis added)

It is a maxim of sound business that accepting “extremely low bid prices” is always risky. In this case the risk is severe because lack of performance might mean a blackout. Public Service’s report indicates that there was some analysis of bids for financial soundness, but there was no such analysis of the financial soundness of the bidders. Hence CFACT’s request #1.

(2) The apparent lack of fair competition.

The PUC decision says this:

“107. The particular bids selected for the CEP Portfolio present certain opportunities for new jobs in Pueblo as well as other areas in Colorado. While there is no guarantee that job losses caused by the retirement of the Comanche units will be remedied with new jobs associated with the selected resources proposed to be built in the Pueblo area, the $670 million of investment associated with 525 MW of new PV solar and 225 MW of storage is considerable.” (Emphasis added)

This “considerable investment” of over half a billion dollars is evidence of strong bias in favor of Pueblo County, which is inconsistent with a fair competition. In fact there is the appearance of what is colloquially called “bid rigging,” which means unfair favoritism in the solicitation, analysis and/or selection of winning bids.

238 eligible projects were bid, of which just 11 were selected for the Energy Plan, three of which are located in Pueblo County. Clearly many possible alternatives exist.

Pueblo County gets the lion’s share of the solar plus storage investment, on a MW basis:

It is extremely unlikely that a fair and state-wide competitive bidding process should give this hugely biased result. More economical and unbiased portfolios may well exist. In addition, this massive storage has never been done before in the US, which creates even more risk of nonperformance.

This bias may not be surprising, given that Pueblo County has been given special attention in the PUC deliberations, because of the negative impact of the proposed early retirement of Comanche units 1 and 2. However, at no time has the PUC authorized, or even suggested, that Pueblo County be favored in the competitive bidding process. Hence CFACT’s request #2.