“HER INFORMATION IS VERY IMPORTANT” 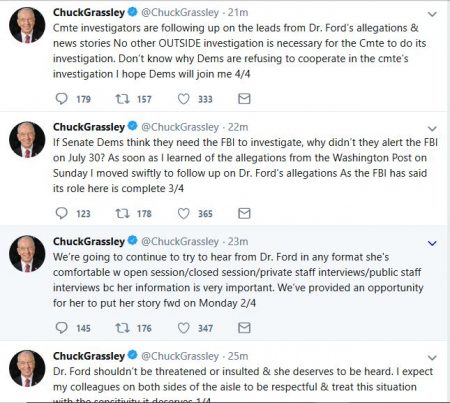 (Sep. 19, 2018) — 11:39 AM EDT — Senate Judiciary Committee Chairman Charles Grassley (R-IA) said late Wednesday morning that the committee continues to extend an invitation to Dr. Christine Blasey Ford to testify in a setting of her choice as to her allegation of sexual assault against US Supreme Court nominee Judge Brett Kavanaugh.

Ford’s claim came to light last Thursday when committee ranking member Dianne Feinstein (D-CA) announced that she had provided “information” to the FBI in the form of a confidential letter, now known to have been written by Ford, claiming that Kavanaugh attempted to rape her while they attended separate preparatory schools in the early 1980s.

The FBI has since deemed the matter a “political” one rather than one it can investigate.

On Monday morning, Ford’s attorney, Debra Katz, told CNN that her client would do whatever was necessary to make her story public. However, Katz backtracked on her statement in a letter addressed to Grassley and Feinstein late Tuesday in which she stated that her client would not testify until a full “law enforcement” probe is completed.

Former U.S. Attorney Andrew McCarthy opined on Wednesday morning that one of the first items in any investigation, if there were to be one, is to interview the accuser.

Senate Democrats have voiced their support for Ford, with Senate Judiciary Committee member Mazie Hirono (D-HI) calling on “the men of this country” to “shut up and step up” and “Do the right thing for a change.”

“We’re going to continue to try to hear from Dr. Ford in any format she’s comfortable w open session/closed session/private staff interviews/public staff interviews bc her information is very important. We provided an opportunity for her to put her story fwd on Monday,” Grassley tweeted, indicating the tweet was part 2 of 4.

Grassley also said that the committee is conducting its own investigation into Ford’s allegation and that “No other Outside investigation is necessary for the Cmte to do its investigation.” He also claimed that committee Democrats “are refusing to cooperate” in that effort.

Meanwhile, Feinstein continues to insist that “a proper investigation” is warranted and that Republicans are rushing Kavanaugh’s confirmation process. 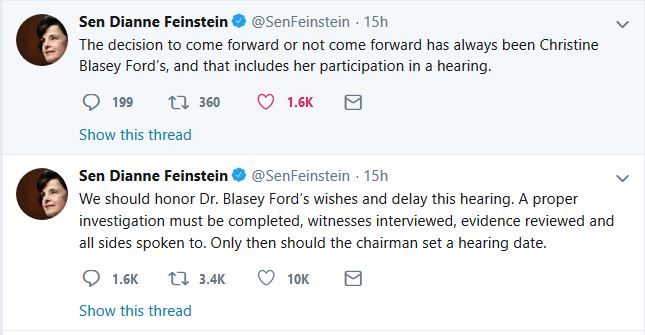 The contentious and at-times raucous confirmation hearings for Kavanaugh were completed when Feinstein allegedly produced Ford’s letter to the FBI.

In Feinstein’s Twitter feed as of press time is a video clip from CNN in which it reports that Ford will testify on Monday along with Kavanaugh, who immediately agreed to appear and reportedly has been preparing since Grassley canceled Thursday’s committee vote on his nomination and scheduled a Monday hearing date. 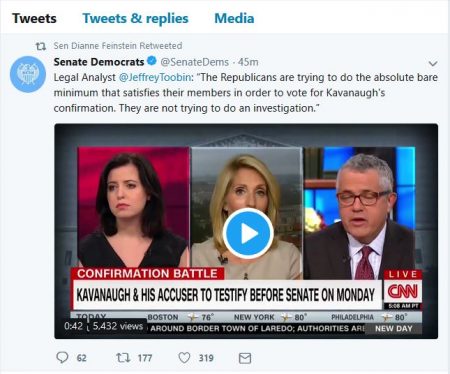 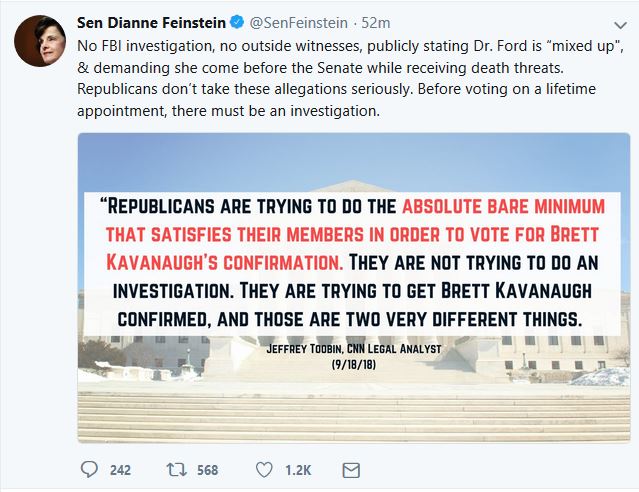 During the confirmation hearings the week of September 4, Feinstein arguably made it clear that she did not support Kavanaugh’s nomination and would vote against his confirmation to the Supreme Court. Her Democratic colleagues indicated the same.

It has been reported that both Ford and Katz are Democrat activists, that Ford’s brother has connections to Planned Parenthood, and that Katz has not only given generously to Democrats over the years, but also sits on the Board of Directors of one of George Soros’s organizations which reportedly “opposes Kavanaugh.”

Also in the mix is Fusion GPS, which contracted with Christopher Steele to produce the now-infamous Trump-Russia “dossier” used to procure spy warrants on onetime Trump campaign adviser Carter Page.