Report: Kavanaugh Accuser Wants FBI to Investigate Before She Testifies

SO WILL WE EVER HEAR FROM HER?

(Sep. 18, 2018) — Sean Hannity reported Tuesday night that Judge Brett M. Kavanaugh’s sexual-assault accuser, Dr. Christine Blasey Ford, said through a team of attorneys in a letter to Senate Judiciary Committee Chairman Charles Grassley that she is not prepared to testify Monday, for which Grassley scheduled a special post-confirmation hearing.

On Monday, one of Ford’s attorneys, Debra Katz, told MSNBC and CNN that Ford would do anything necessary to make her accusation public.  Katz is now stating that “witnesses” to the alleged incident should be interviewed by “law enforcement.”

Late last week, committee ranking member Sen. Dianne Feinstein (D-CA) reportedly sent a letter written by Ford to the FBI, which has declined to investigate the 36-year-old claim.  Feinstein reportedly received the letter in late July and did not mention it during Kavanaugh’s confirmation hearings September 4-7 or share it with her Republican colleagues.

According to Feinstein, Ford had desired confidentiality and had not planned to take any additional steps to make her story known outside of the letter.  However, over the weekend, Ford reportedly identified herself to The Washington Post.

Ford has reportedly taken part in at least one protest against Trump and his policies.

In early July, Trump nominated Kavanaugh to fill the now-vacated seat of U.S. Supreme Court Associate Justice Anthony Kennedy, for whom Kavanaugh clerked at one time.  He later served as staff secretary in the George W. Bush White House and was accused of lying about certain aspects of his service by Feinstein and the nine other Democrats on the Senate Judiciary Committee.

A committee vote was to take place on September 13 and postponed to September 20.  That vote was canceled in light of Ford’s accusation, resulting in the Monday date for both Ford and Kavanaugh to testify, although not simultaneously.

Mainstream media reported that both would testify, but Ford’s attorney wrote on Tuesday that her client wishes to see a law-enforcement investigation into her claims prior to her providing any testimony.

After insisting she believed Ford’s accusation throughout “the process” she launched, Feinstein said late Tuesday that she cannot vouch for “everything” Ford is claiming.  Feinstein continues to insist that the FBI should investigate Ford’s allegation.

On Tuesday morning, Grassley told radio host Hugh Hewitt that he had not received a response after several attempts to reach Katz regarding whether or not Ford will accept the committee’s “invitation” to testify Monday, which he offered to hold in public or private.

Earlier on Tuesday, Sen. Mazie Hirono (D-HI), flanked by Sens. Richard Blumenthal, Chris Murphy and Kirsten Gillibrand, said that women making sexual-assault claims “should be believed.”  Hirono added that “men” should “shut up and step up.”

Blumenthal said he believes Ford and praised her “courage” for coming forward.

During Kavanaugh’s hearings, Democrats frequently interrupted Grassley, and protesters frequently shouted from the gallery in the Hart Senate Office Building.  More than 200 were ultimately arrested.

Many see Kavanaugh’s nomination as a threat to the 1973 Roe v. Wade opinion, which overturned a Texas law declaring abortion illegal except in the most extreme circumstance to save the life of the mother.  Asked about the opinion, Kavanaugh stated that the ruling was “settled law” and that a later case affirming the decision established “precedent on precedent.”

When Ford’s accusation began to lead the news cycle early Monday, Kavanaugh said he is willing to testify publicly as to the allegation, which he has roundly denied in two written statements.  Ford’s accusation lacks such details as where the assault allegedly occurred, the date, and how four minors obtained alcohol as Ford alleged.

Hannity posited that the claims of women accusing Democrat men of misconduct are often dismissed as opposed to claims made against Republican men.  Kavanaugh is seen as a Republican, although during his confirmation hearings he said he maintains an apolitical stance as a sitting judge on the U.S. Court of Appeals for the District of Columbia for the last dozen years.

The White House has said that Ford deserves a hearing, as does Kavanaugh, and that a short delay in a confirmation vote on Kavanaugh’s nomination to the Supreme Court will not be harmful.

In 1991, Clarence Thomas faced last-minute sexual-harassment allegations from former colleague Anita Hill, after which he was confirmed by a small Senate majority.

In 1987, Robert Bork’s nomination was immediately attacked by then-Sen. Edward Kennedy, who claimed that:

Robert Bork’s America is a land in which women would be forced into back-alley abortions, blacks would sit at segregated lunch counters, rogue police could break down citizens’ doors in midnight raids, and schoolchildren could not be taught about evolution, writers and artists could be censored at the whim of the Government, and the doors of the Federal courts would be shut on the fingers of millions of citizens.

Kennedy, who died in 2009, is well-known for an incident at Chappaquiddick, MA, in which a young woman died, reported by Wikipedia as:

The Chappaquiddick incident was a single-vehicle car accident that occurred on Chappaquiddick Island, Massachusetts, on Friday, July 18, 1969.[4][5] The late night accident was caused by Senator Ted Kennedy‘s negligence, and resulted in the death of his 28-year-old passenger, Mary Jo Kopechne, who was trapped inside the vehicle.[6][7][8][9]

According to his testimony, Kennedy accidentally drove[10] his car off the one-lane bridge and into the tide-swept Poucha Pond. He swam free, left the scene, and did not report the accident to the police for ten hours; Kopechne died inside the fully submerged car.[11][12] The next day, the car with Kopechne’s body inside was recovered by a diver, minutes before Kennedy reported the accident to local authorities. Kennedy pleaded guilty to a charge of leaving the scene of a crash causing personal injury, and later received a two-month suspended jail sentence. 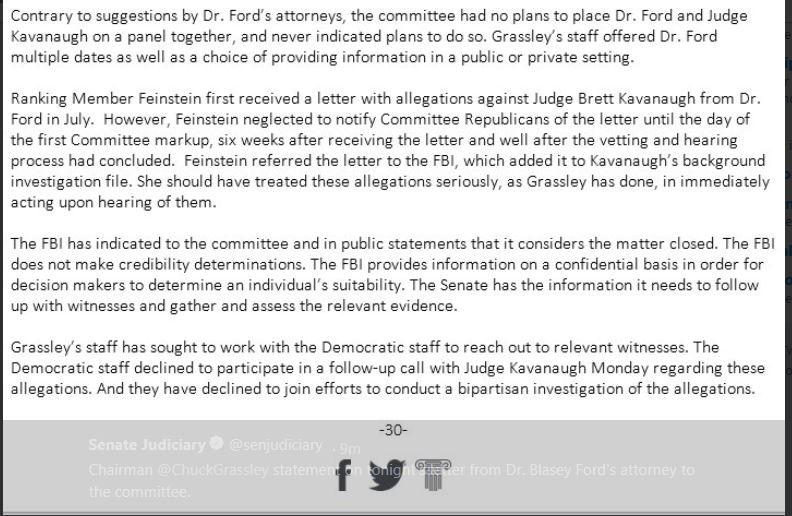 One Response to "Report: Kavanaugh Accuser Wants FBI to Investigate Before She Testifies"