“HE HAS ALWAYS TREATED WOMEN WITH DECENCY AND RESPECT” 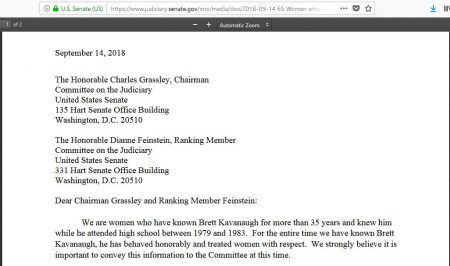 On Thursday, the committee’s ranking member, Sen. Dianne Feinstein (D-CA) said that the alleged author of the letter she received from Rep. Anna Eshoo wrote that Kavanaugh and another young man had once “locked her in a room, against her will, making her feel threatened.”

No text of the alleged letter has been released, although The Washington Post described its allegation as one of “sexual misconduct.”  The Huffington Post has gone further in its description of what the woman supposedly alleged and quoted Kavanaugh as categorically denying the accusation.

Late Thursday, The Washington Post reported that the FBI declined to open an investigation into the allegation. “Once the White House received the material from the FBI, which it did early Thursday afternoon, it sent the information to the Senate Judiciary Committee, according to an administration official. that it would provide the alleged letter to the White House as part of Kavanaugh’s vetting process,” The Post reported.

A committee vote was expected to be taken Thursday on Kavanaugh’s nomination but was postponed a week.  The eventual vote follows four intensive days last week of confirmation hearings rocked by raucous and frequent interruptions by committee Democrats and protesters and culminating in more than 200 arrests, according to The Hill.

Feinstein indicated that she has had the alleged letter for some time, but she did not raise its reported allegation during the hearings.  The alleged writer “strongly requested confidentiality,” Feinstein said Thursday.

Kavanaugh has served for a dozen years on the U.S. Court of Appeals for the District of Colombia, considered to be the nation’s second-highest court. He was nominated on July 9 by President Donald Trump following then-U.S. Supreme Court Associate Justice Anthony M. Kennedy’s announced retirement from the bench after more than 30 years.

Supreme Court justices can serve for life “during good behaviour,” according to Article III, Section 1 of the U.S. Constitution. More frequently in recent years, they have individually chosen to retire for various reasons.

Gorsuch’s confirmation hearings were not marked by the same level of controversy as Kavanaugh’s, as many on the political left see Kavanaugh as the “swing vote” to overturning such landmark cases as Roe v. Wade.

One of Kavanaugh’s responses to questions on the subject was mischaracterized by former Democratic presidential candidate Hillary Clinton and current California U.S. Senator Kamala Harris.

The Sixth Amendment provides for an accused to have the ability to face his or her accuser(s).  Feinstein has said the alleged Kavanaugh accuser “declined to come forward or press the matter further.”

A similar accusation was made by Anita Hill against then-Supreme Court nominee Clarence Thomas, who characterized it as “a national disgrace” and “high-tech lynching.”