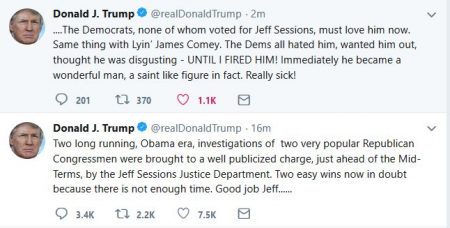 (Sep. 3, 2018) — At mid-afternoon on Monday, President Donald Trump issued two tweets, one a continuation of the other, again be rating his attorney general, Jeff Sessions, for pursuing charges against “two very popular Republican Congressmen.”

“Two easy wins now in doubt because there is not enough time. Good job Jeff…..” Trump wrote in his first tweet. [sic]

Continuing the thought, he opined that “The Democrats, none of whom voted for Jeff Sessions, must love him now.”

He equated the situation, as he sees it, with that of former FBI Director James Comey, who Trump fired in May of last year. “The Dems all hated him, wanted him out, thought he was disgusting – UNTIL I FIRED HIM!”

Trump claimed that the Democrats then underwent a change of heart toward Comey. “Immediately he became a wonderful man, a saint like figure in fact. Really sick!” Trump tweeted exasperatedly. [sic]

On August 21, Rep. Duncan Hunter (R-CA52) was charged, along with his wife, by the Justice Department with improper use of campaign money.  Hunter has denied the charges.

On August 8, Rep. Chris Collins (R-NY27) was charged with “insider trading.”  Collins called the charges “meritless” and initially said he would not withdraw from his reelection bid.  However, three days later, Collins announced that he would not seek reelection in November, The Guardian reported.

After Collins’s arrest, the media stressed that he was an early Trump supporter.

At least two US senators, Lindsey Graham of South Carolina and Charles Grassley of Iowa, has suggested that Sessions should resign or be fired given the president’s lack of confidence in his performance since he was confirmed by the Senate in early 2017. Directly afterward, Sessions announced that he was recusing himself from any matters pertaining to the ongoing “Russia” investigations, which included whether or not Trump campaign aides “colluded” with Russian operatives and alleged “meddling” by the Kremlin in the 2016 presidential election.

Trump has frequently tweeted his displeasure with Sessions for recusing himself and openly stated that had he known Sessions would arrive at that decision, he would not have nominated him.

Graham has been known to be critical of Trump, but on the issue of the nation’s chief law enforcement officer, said he believes the president deserves an attorney general in whom he can have confidence.

Although U.S. Attorney for the Southern District of New York Geoffrey Berman said of the indictment that “given that it is ‘months away from the election, those concerns do not apply,’” according to The New York Times.

U.S. attorneys work at the pleasure of the president and all under the broad umbrella of the US Justice Department.

On August 11, two individuals announced their intention to seek Collins’s seat. While researching this story, The Post & Email contacted the New York Republican Party to confirm who will appear on the ballot.

Congressional primaries in New York State were held on June 26.

New York State has restrictive regulations as to replacing a candidate shortly before an election.  According to The Guardian, “Under New York state election law, Collins’ name could be taken off the ballot under certain narrowly defined circumstances that include death, disqualification or being nominated for a different office such as a county clerkship.”

According to a poll reported by KGTV on August 27, despite the indictments, Hunter might retain enough support to win reelection in November.