WHAT DOES HE HAVE IN MIND? 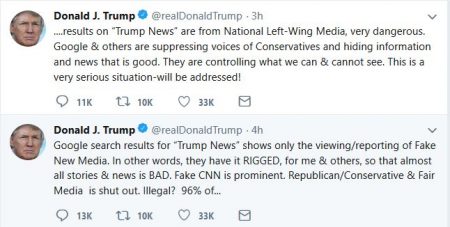 (Aug. 28, 2018) — Early Tuesday morning President Donald Trump tweeted, as he has in the past, his concerns about a bias on the part of “Google” and the U.S. news media for allegedly “suppressing voices of Conservatives and hiding information and news that is good.”

For decades, Trump has had an adversarial relationship with the media, which often highlighted his financial pitfalls rather than his real-estate successes and charitable donations.

After first announcing he would run for president in June 2015, The Huffington Post categorized articles about Trump’s candidacy as “entertainment” until after he won the Republican nomination in July of the following year.

In his first tweet on the subject on Tuesday, Trump stated that a search using Google with the term “Trump News” reveals “they have it RIGGED, for me & others, so that almost all stories & news is BAD.” [sic]

The results gleaned from a Google search using that term for this writer at 9:09 AM EDT are:

and contain the headlines, “Trump wakes up complaining about negative Google search results about himself. ‘Illegal?’” and “Trump rage-tweets Google alleging search ‘bias,’” the latter with an arguably unflattering photo of the 45th president.

A Yahoo! search completed minutes later yields one of the same Google-search articles, one from MSN and one from the BBC titled, “Trump attacks ‘left-wing’ Google search results.”

A Harvard University study showed that coverage of Trump’s first 200 days was “80% negative” among “The New York Times, The Wall Street Journal, The Washington Post and the main newscasts on CBS, CNN, Fox and NBC,” as reported in The Washington Times in May 2017.

In recent months, Dennis Prager of “PragerU,” online personalities Diamond & Silk, and other “conservatives” have reported censorship to the point of complete banishment on such social-media platforms as Twitter and Facebook.

Although not categorizing itself as “conservative,” this publication’s Facebook traffic was reduced by approximately 90% after Facebook changed its algorithm in January. Our Twitter account recently lost 21 followers without an explanation, a number which was magnified exponentially by more prominent users of the platform.

On Sunday evening, NRA spokeswoman Dana Loesch tweeted a threat made against the lives of her children on Twitter which was initially not deemed to have violated the platform’s rules of conduct. Following a formal complaint, Twitter reportedly took action.

The Catholic organization Ordo Militaris had its Twitter account shuttered permanently in March after criticizing UK Prime Minister Teresa May’s handling of radical Islam within her nation’s borders. To our knowledge, the owner’s access to the account was never restored despite numerous complaints and appeals.

In early August, in what could have been an organized effort, info wars’ host Alex Jones was banned from Spotify, iTunes, Facebook and YouTube within a 24-hour period for allegedly posting “hate speech.”  Jones had reported creeping censorship as early as February of last year.

Politifact, which provided an explanation as to why Jones was purged from the platforms, has a business relationship with Facebook as a “fact-checker.”

Ten days ago, Trump expressed concern over the issue of “Internet censorship,” claiming that “Social Media is totally discriminating against Republican/Conservative voices. Speaking loudly and clearly for the Trump Administration, we won’t let that happen. They are closing down the opinions of many people on the RIGHT, while at the same time doing nothing to others…”

Trump has been criticized for terming the media “the enemy of the people” but has clarified his remark to express his belief that the “fake news media is the enemy of the American people.”