WHAT IS THE DIFFERENCE BETWEEN “PERMANENT” AND TEMPORARY? 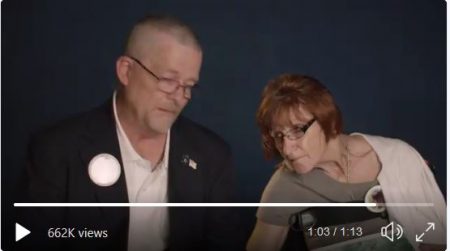 (Aug. 23, 2018) — The official White House Twitter feed features a number of videos from events over the past several days, including scenes captured from the posthumous award Wednesday of the Congressional Medical of Honor to Air Force TSgt. John A. Chapman.

It also features tweets from President Trump, First Lady Melania Trump and Vice President Mike Pence on the state of the economy and the threat of Hurricane Lane bearing down on the Hawaiian islands.

A video posted some 19 hours ago, according to Twitter, features relatives of Americans killed by illegal aliens, many of whom have appeared with Pres. Trump at events focusing on America’s porous borders and Trump’s advocacy of stricter immigration laws and building a wall on the US-Mexico border.

The father of 16-year-old Dustin Inman, killed in 2000 by an illegal alien, who The Post & Email interviewed last year just before Fathers’ Day, Billy Inman, also speaks in the video.   His wife Kathy, for whom he cares on a daily basis, is at his side in a wheelchair, permanently crippled and epileptic as a result of the rear-end accident at which the illegal was driving more than 60 mph toward a stop sign.

A Georgia organization, The Dustin Inman Society, which seeks better enforcement of immigration laws, was named in the young man’s memory and is led by D.A. King.

The video appears to address calls from both the political left and right to halt the policy of “separating” illegal alien children from their parents after they crossed the border, whether or not they are formally seeking political asylum in the United States. Last month, a federal judge ordered the Trump administration to reunite illegal alien children younger than 5 with their parents by July 10 and older children by July 26.

Subsequently, the Senate Judiciary committee held a hearing with Border Patrol and other government officials who stated among them that roughly 25% of adults crossing the Southern border with children are actually related. Thousands of children are reportedly trafficked across the border each year and placed in the Unaccompanied Alien Children (UAC) category, sheltered in specially-designated residences and provided mental, dental, and medical health services by the Department of Health and Human Services (DHHS) at taxpayer expense.

According to news reports, approximately 1,800 of 2,500 illegal alien children were reunited with their parents by the July 26 deadline, although some of the parents were deported before that time.

Most reports refer to the illegals as “migrants” and the families “anguished.”  Their crossing of the border illegally is most often not mentioned.

The title of the video, which invokes the recent finding that an illegal alien murdered 20-year-old University of Iowa student Mollie Tibbetts, is “Permanently Separated,” a theme echoed by the individuals relating their stories in the video.

“We were permanently separated, not just for a week or a month,” says one woman at the opening of the video.

At the time of this writing, the video has been viewed approximately 662,000 times.