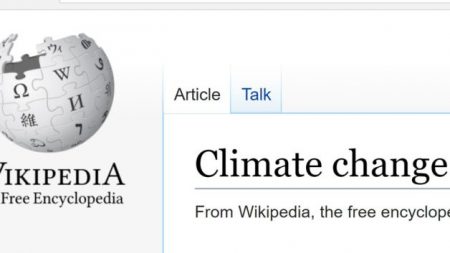 (Aug. 18, 2018) — Until now I did not care much that Wikipedia’s page on global warming was deeply alarmist. This was well known and the alarmism was said to be well guarded. But given that YouTube has foolishly decided to link every skeptical climate change video to this page, the alarmism is a real concern. It is time that skeptics took a run at this noxious page.

The page itself is a monster, with several thousand green words. Wikipedia likes citations so there are a whopping 274 footnotes, providing a veritable who’s-who of alarmists. Naturally these include endless mode references to the IPCC. The external links are mostly to the usual U.S. Federal alarmist sites.

If skeptics can manage to add content to this page, a good set of citations are the reports from the Nongovernmental International Panel on Climate Change. The many articles on Dr. Judith Curry’s blog Climate Etc are also very useful for citation, because they typically include hundreds of relatively technical comments and discussion. There is a good local search box.

Of course there are many other sources for skeptical citations, especially the numerous active blogs, including CFACT. Some of these blogs specialize in specific issues, from questionable adjustments in the surface temperature estimates to the benefits of increasing carbon dioxide. My scientific articles may also be useful.

I recommend adding small bits of skeptical content, rather than trying to rewrite what is already there. In many cases it will be sufficient to simply say something like “However, this claim is contested” or “controversial,” or some such, with an appropriate citation.

All of the usual alarmist arguments are there. These are presented as established facts, with no hint of the deep scientific debate. Skepticism is only acknowledged toward the very end, in a section labeled “Public opinions and disputes.” Here it basically says the public has been confused by conservative think tanks, oil companies and poor press coverage. That the scientific debate is real is nowhere admitted.

By way of example, here is the very first paragraph from the Wikipedia page:

“Global warming, also referred to as climate change, is the observed century-scale rise in the average temperature of the Earth‘s climate system and its related effects. Multiple lines of scientific evidence show that the climate system is warming.[1][2][3] Many of the observed changes since the 1950s are unprecedented in the instrumental temperature record, which extends back to the mid-19th century, and in paleoclimate proxy records of climate change over thousands of years.[4]”