“I HAVE NEVER SEEN ANYTHING SO RIGGED IN MY LIFE” 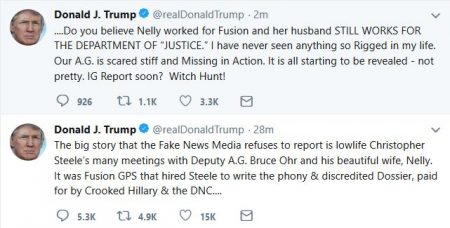 (Aug. 11, 2018) — On Saturday afternoon, in apparent response to recent reports as to the origins and circulation of the Russia “dossier,” President Donald Trump opined on Twitter that “Our A.G. is scared stiff and Missing in Action.”

Soon after being confirmed in February of last year, Attorney General Jeff Sessions recused himself from all aspects of the FBI investigation into whether or not anyone in the Trump campaign “colluded” with Russian operatives as well as alleged Russian interference in the 2016 election. As a result, Trump has publicly expressed his disappointment in Sessions on several occasions, going as far as to say that had he known Sessions would recuse himself, he would have nominated someone else for the nation’s top law-enforcement post.

On Friday night, Rep. Mark Meadows (R-NC11) tweeted that Bruce Ohr, the fourth-ranking Justice Department official in the Obama regime, will be testifying before Congress at the end of the month. In his first tweet of the series on Saturday, Trump referred to Meadows’s announcement that Ohr had “60+ contacts” with the procurer of the Russia dossier, Christopher Steele, as “the big story that the Fake News Media refuses to report.”

Ohr was likely subpoenaed by House Judiciary Committee Chairman Robert Goodlatte, who is reportedly also seeking testimony from “other current and former FBI and DOJ officials including Jim Baker, Sally Moyer, Jonathan Moffa and George Toscas,” according to The Hill on Friday.

Trump included Ohr’s wife Nellie in the alleged encounters with Steele, although whether or not she was actually present is unclear. However, prior to the presidential election Nellie Ohr was employed by Fusion GPS to work on the Russia dossier, Fox News has reported.

In 2016, Fusion paid Steele to tap into his alleged Russian sources to assemble the dossier which then-FBI Director James Comey was to tell Trump in January 2017 was “salacious and unverified.” Comey also conveyed to Trump that he was not a subject of the FBI’s investigation.

However, the dossier was used to obtain for successive surveillance warrants on Dr. Carter Page, an informal, volunteer foreign-policy advisor to Trump during the campaign cycle, with FBI and DOJ officials claiming on the applications connections between Page and Russian figures which Page has said do not exist.

Page has not been charged with a crime.

For the last week, Trump has stayed at his golf resort in Bedminster, NJ for a working vacation, during which he has continued to tweet his thoughts on current events and new developments in the Russia investigation, now overseen by Special Counsel Robert Mueller.

In his second tweet on the topic, Trump wrote, “Do you believe Nelly worked for Fusion and her husband STILL WORKS FOR THE DEPARTMENT OF ‘JUSTICE.’ I have never seen anything so Rigged in my life.”

Fusion obtained the funds to pay Steele from the mega-law firm Perkins Coie, which acted as a pass-through for the Democratic National Committee (DNC).

Trump further characterized the connections, first reported by The Hill’s John Solomon on Tuesday, among the various players in the creation and circulation of the Russia dossier, as “not pretty.”  Referring to the ongoing work of the DOJ’s inspector general, Michael Horowitz, Trump asked, “IG Report soon?”

On Friday night’s “Hannity,” Fox News contributor Sara Carter told guest host Jeanine Pirro that Horowitz’s next report on the conduct of FBI and DOJ figures in the runup to the 2016 election is not expected until after the first of the year.

Trump closed his ruminations on the subject with his customary label for the Mueller investigation, “Witch Hunt!”