The Incestuous Cesspool in a Democratic DC Marsh 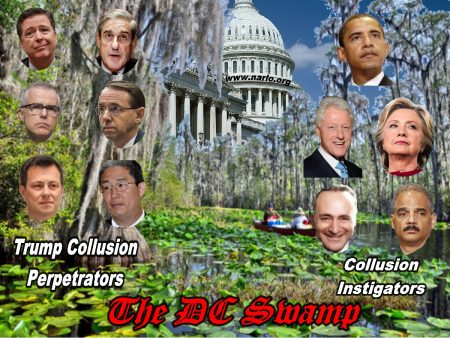 Sometimes a different literary form does a better job of getting the message across.  Let’s see if you agree.

The names keep floating by in intertwined tangles,
From Comey, to Mueller, to Rosenstein, to Strzok.
Little tidbits of information are hanging there in dangles
As the TV blares at us like an oncoming truck.

Then there’s Baker, Page, McCabe and Ohr
But lets not forget the GPS at Fusion.
Each is involved in lying and are corrupt to the core,
And even their wives contribute to the collusion.

Hillary paid Fusion who hired Steele.
They were all involved in a shady little deal,
To get the goods on candidate Trump
So he’d never get elected and instead get dumped.

But the corruption gets worse as we dig into the din.
There is Comey and Mueller, friends for many years.
From the evidence it’s no doubt they are guilty as sin
But it is highly unlikely they have any fears ……

Of ever being prosecuted or spend time in jail.
Because they are looking out for each other.
And it’s not likely that they will fail
As they protect each other like brother protects brother.

You see they were planning sort of a coup,
An insurance policy to stop Donald Trump.
They were promoting Hillary and her entourage too
To make sure Donald was ceremoniously dumped.

But McCabe had much more dirt in his biased little mouth
When he failed to recuse himself from investigating Clinton,
After it was discovered that Democrat Terry McCauliffe
Was putting thousands of dollars in McCabe’ wife’s mittens.

Now the corruption gets worse as we peel back the onion.
Bruce Ohr, was associate deputy attorney general at the DOJ.
Ohr’s wife at the time worked for GPS Fusion,
While Bruce met with Steele and thought it OK.

Ohr was taking the Steele Trump dirt to the FBI
And out of all this dirt came the infamous dossier.
None of it was verified and most was a lie
But they used it to get a FISA warrant ….. anyway.

Now there was FBI Peter Strzok, a real piece of work
As he colluded during an affair with FBI Attorney Lisa Page.
From all the evidence Peter turned out to be a real jerk
When he was finally exposed on the critical world stage.

50,000 texts flew back and forth between the two,
As they plotted to undo Trump in the presidential election.
Their efforts had all the elements of a warless coup
But they got caught up in a Congressional investigation.

In all this furor between Page and Strzok
We might have forgotten that Strzok had a wife.
Sadly she too is one of the swamp’s ducks
As she leads a federal government bureaucracy life.

Melissa Hodgman, Strzok’s wife, just happens to be
Associate Director, Enforcement Division at the SEC.
Somehow she was involved in the Clinton Foundation
And it’s been rumored that she nixed the entire investigation.

It’s too bad that so many have forgotten that in 2002
That sweet little child, you know Joan Comey’s son,
Became the lead investigator in the Clinton Foundation
But once again, like so many times before, the Clintons won.

In 2016 Comey get a second chance to go after Hillary
And what happened then was a 2002 playbook.
On July the 5th, 2016, like a 50-caliber artillery
Comey did it again and let Clinton off the hook.

But this incestuous swamp gets dirtier by the day,
When looking at the history of Comey, Mueller and Rosenstein.
You’ve all heard of Clinton’s Uranium One deal and pay for play.
Mueller was FBI Director and Rosenstein the investigator at the time.

Now Bill Clinton gets a $500,000 Moscow speaking fee,
And the Clinton Foundation bank account jumps to $145 million.
It seems that the Clinton’s have found an international money tree
On their way to a billion, or a trillion, or is it a gazillion.

Rod Rosentein, Deputy Attorney General at the DOJ
Is married to a sweet little girl named Lisa Barsoomian.
Now many might think that it is perfectly OK
That she is a U. S. DC District Attorney and a foreign Armenian.

But Barsoomian is not just a little innocent spouse
Of Deputy Attorney General Rod Rosenstein.
When you dig a little deeper she’s really a louse
As she blocks FOIA requests most of the time.

Mueller’s which-hunt investigation won’t come to a conclusion,
As he digs into the “evidence” and goes far a field.
He could spend years investigating and not find collusion,
Even if the entire “onion” was eventually peeled.

We would be derelict if we didn’t mention today
A few other politicians involved in the fray.
There’s Obama, Holder, Lynch and Lew,
And Rice, Brennan and Clapper too.

In their hate for the Donald, they bent the rules.
Just for the heck of it, they unmasked some Republican fools.
Without their knowledge of course and definitely against the law
They thumbed their noses at the victims and rubbed their faces raw.

The political establishment, the bureaucracy and the insidious deep state
Have the American people tied up in invisible chains.
So few are aware of our dilemma and our eventual fate.
It would appear that WE THE PEOPLE have run out of brains.

Freedom and liberty don’t seem to matter any more.
Unalienable rights have been left on the cutting room floor.
Our cherished constitution has been cut to shreds
As way too many of us have become dolts or hopeless crackheads.

Millions of millennials are screaming for a socialist politician,
Like Bernie Sanders or Alexandria Ocasio-Cortez.
Both candidates are as hot as nuclear fission
And not much different than Che Guevara or Hugo Chavez.

It’s possible you believe that it’s just politicians who are bad
But it really goes much, much deeper than that.
It extends to the media and academia and that’s really sad
When it turns out they too have corruption down pat.

Case in point is the great Chuck Todd of Meet the Press fame.
It seems his wife was receiving millions of loot
From the socialist Bernie Sanders Presidential Campaign.
But during the Sanders’ interviews Chuck thought a disclosure was moot.

It’s doubtful that the perpetrators will ever be exposed,
As they hide behind executive privilege or sovereign immunity.
For some strange reason all their cases get closed
As they ride the establishment horse of legal impunity.

None of these criminals gets convicted or goes to jail.
They just float around in a protected bubble of their own.
Any attempts to get them seem to always fail
And all the rest of us can do is cry, complain and moan.

The whole sordid situation is just about as bad as it can get.
The collusion, corruption and racketeering are everywhere.
The perpetrators’ antics have left America deep in debt.
If we think we can save her, we may not have a prayer.

For the last 100 years, plus or minus a decade or so,
And we don’t want to seem like were being too harsh,
But the people are stupid, lined up like ducks in a row
And they have allowed America to become an
“Incestuous Cesspool in a Democratic DC Marsh.”

The moral of this story, that’s if you want to hear,
Our Republic is on the brink of achieving its own demise.
There is much to be concerned about and very much to fear.
If we let this destruction happen, we can’t be very wise.

We’ve given you fair warning and relayed all the facts.
It’s time for the people to wake up and finally begin to act.
Liberty is on the chopping block and freedom’s not far behind.
If something isn’t done soon, freedom’s death warrant we have signed.

Did you LIKE the poem?  Let us know what you think.

The Incestuous Cesspool in a Democratic DC Marsh added on Sunday, August 5, 2018

2 Responses to "The Incestuous Cesspool in a Democratic DC Marsh"