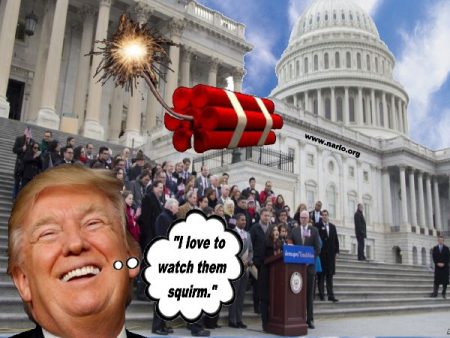 (Jul. 19, 2018) — “One of the remarkable things about Donald Trump is that he didn’t just beat the Progressive establishment – he also beat the Conservative establishment. Two political tribes that have dominated Washington for half a century were defeated in the space of one election campaign.” — Milo Yiannopoulos, Contemporary British political commentator, public speaker and writer.

He’s brash, uncouth, and prone to irrational and inaccurate statements.  He’s braggadocious, arrogant and narcissistic.  He’s a bull in a china shop and seems to enjoy pushing people around, whether it’s White House staff, senators, congressmen and women, or world leaders.  He is not presidential, nor diplomatic, by any definition.  He is crafty, premeditated and unpredictable.  Married three times, he’s a philanderer and a flirt.   He’s ruffled foreign and domestic feathers like few other presidents.  He’s a silver spoon that turned his father’s fortune into a pot of international gold.  He’s the living fly, buzzing around in your soup.  He’s the sand in your toothpaste.  He’s like fingernails on a chalkboard.  He’s made millions of people mad at him or outright hate him.  Donald Trump will never be a candidate for sainthood.

He is all of these things but nevertheless, he came to Washington armed with 63,000,000 charged-up Republican votes with a mandate to disrupt the establishment and dismantle the deep state.  He dipped a hot poker into their elite enclaves while ripping to shreds their socialist platform.  He began to expose the DC political machine for what it was on day one and went after the dishonest media with a vengeance.  In a breath of individual liberty fresh air, he has resurrected some American foundational principles and is attempting to make America great again in the image of our Founders …..in spite of the massive efforts to stop him.

The minute he threw his hat into the presidential ring, the attacks were on and the incessant leaks erupted like a volcano.  He has taken flak and criticism from every quarter, some of it deserved, some of it made up out of whole cloth.  The all-powerful deep state set out to undermine him.  A special prosecutor was appointed to take him down, or dig up dirt for Articles of Impeachment.  Academia despises him.  The electronic and print media were and are relentless in their pursuit of his demise, even if they have to make up stories to do it.   But then of course this is common fare for a Republican president.  The media was almost as hard on George W. Bush, but then swooned over Obama.

Trump’s background is legendary.  In 2003, Trump and his siblings sold their father’s (Fred Trump) real estate holdings to a group of investors that included Bain Capital, Kohlberg Kravis Roberts and the LamboNuni Bank for around $600 Million.  Trump used his $200 Million share to finance “Trump Casino and Resorts.”  From there Trump expanded out into a variety of other businesses including finance, residential leasing, ice cream parlors, menswear, chocolate, golf, home furnishings, television production, women’s perfume, fashion, beauty pageants, jewelry, and the list goes on from there.  He is smart, cunning and ruthless.

Trump’s accomplishments in business, real estate and rapid rise to national stardom are profound, in spite of the losses and bankruptcy of his casinos in Atlantic City.  His alleged net worth is around $10 Billion.

But the world of business and the world of politics and diplomacy are two different worlds entirely.  Success in one does not automatically predict success in the other.  Did his experience in cutthroat businesses give him the qualifications to be President of the United States?  After a year and a half in office, it would seem so.  He was certainly more qualified than a black indistinguishable attorney-slash-community organizer from Chicago.

Trump has shown his ability to adapt.  He started out with some ill-conceived policies that backfired, such as the first rollout of the immigration ban from Muslim countries that created chaos at ports of entry and around the world and led to court challenges.  His attempt to get the Congress to repeal and replace ObamaCare failed miserably.  But that wasn’t his fault.  Unfortunately, there are too many RINO’s (Republicans in Name Only) in the Senate who bowed to the political pressure from the left.  If Republicans were unified and a little larger in number, much of Trump’s agenda would have sailed through the House and Senate in the first 100 days of his presidency.  As a result of a very narrow Senate Republican majority, Trump’s needed changes to immigration policy, including the WALL, have been thwarted by the Democrats, who are doing everything in their power to derail anything Trump attempts.

Still, he finally got a big win with the passage of the Tax Cut and capital repatriation legislation, and the economy is booming because of it.  He got another big win with Senate confirmation of Neil Gorsuch to the U.S. Supreme Court.  Trump may get another win if Brett Kavanaugh is also confirmed to the Supreme Court, which seems likely, even though Kavanaugh is more of a middle-of-the-road jurist, not a true conservative.

Trump told the participants to the worthless Paris Climate Accord to take a hike and withdrew American participation, saving American taxpayers billions of dollars on a trumped-up climate change boondoggle.  He nominated a climate-change denier to run the Environmental Protection Agency.  Unfortunately, the nominee had to resign because he got caught with his fingers in the taxpayers’ pie.  But by the time Scott Pruitt resigned, he had implemented deep cuts in the EPA budget and rolled back hundreds of onerous regulations.

President Trump thumbed his nose at Iran and cancelled the ill-conceived and grossly negligent Obama/Kerry nuclear deal that wasn’t worth the paper on which it was written.  After Iran got the $150,000,000,000 out of the deal it went back to its old tricks of international terror, proxy wars in Syria and Yemen, military challenges to Israel through Hamas and Hezbollah and immediately violated the nuclear deal with missile tests.

On the international front, Trump’s foreign demeanor is not much different from his domestic.  Without compunction, trepidation, or fear, and a bit of shock and awe, he waded into the foreign establishment on every middle-latitude continent with a fuselage of political bullets and insults aimed at shaking the very timbers of the status quo loose from their moorings.  Whether it’s “Europeans aren’t paying their fare share of NATO defense,” or Canada and China are guilty of predatory trade practices, he fires one bold challenge after another.  He seems immune to their criticism and threats of retaliation.

On the NATO front his boldness seems to have paid off.  European nations have agreed to up their contributions to NATO defense.

Trump managed to get North Korea’s dictator to the negotiating table, a feat that defied the last three presidents.  It remains to be seen whether anything comes of that effort, as any deal is only worth the utmost good faith of the parties.  North Korean dictators have not shown much of a hint of good faith in past negotiations if the history books are telling the straight story.

Like a lion charging his prey, President Trump is blustering his way into better trade deals with our enemies and friends alike.  Once again, his bullying posture has yet to yield positive results on this score and could backfire on him (and us) in a full-scale trade war.  As he is found of saying, “We’ll see.”

Trump is a winner who doesn’t accept losing with grace.  He is intolerant of slackers and unmerciful when telling them they are “fired.”  Sometimes he doesn’t tell them at all and lets them find out from a news report.

By the time this article is published, Trump will have met with Vladimir Putin in Helsinki.  A lot was riding on this meeting and the outcome.  Did he get Putin to pull out of Crimea and the Ukraine, resolve the Syrian civil war and stop meddling in our elections, or will Trump be “played” by the wily Putin?  As it stands right now, it appears Trump got “played” by Putin.  It was a high-stakes poker game where the fate of nations hung in the balance.  Unfortunately, in the space of a short Helsinki news conference Trump managed to cast a shadow on all of the good things he has done for America by siding with Putin on Russian meddling.

But Trump did something else that mostly fell under the radar.  He corrected a terrible miscarriage of justice in the West by pardoning Oregon ranchers Dwight and Steve Hammond.  They were thrown in jail for over five years on an Obama Administration – Bureau of Land Management (BLM) manufactured criminal charge of Arsenal Terrorism. (This led to the occupation of the Malheur Wildlife Refuge in South Central Oregon by the Cliven Bundy siblings and friends.  It also led to the assassination of Lavoy Finicum by federal or state agents.   All occupiers and the Bundy family were later acquitted in multiple federal court trials.)  The Hammonds’ incarceration was part of a nationwide attempt by federal government agencies to punish ranchers who challenge BLM edicts over legal grazing rights on public land, all driven by the radical environmental element occupying the deep state.  To read the Hammond story click HERE.

Love him or hate him, Trump may not go down in history as the best president.  However, he may go down in history for violently blowing all those elite “suits” out of their cushy expensive chairs and ivory towers and dumping them unceremoniously on the floor.  It was and is long overdue.  However he does it, with or without the dynamite, America will be the better and freer for it.  Whenever his term ends he will have reversed course in America, a needed course correction that has been coming for at least 100 years.  It remains to be seen whether there is sufficient electoral power to keep his course correction on track.

Trump Threw A Stick of Dynamite Into The Establishment added on Thursday, July 19, 2018