WHO WAS THE “BENEFICIARY?” 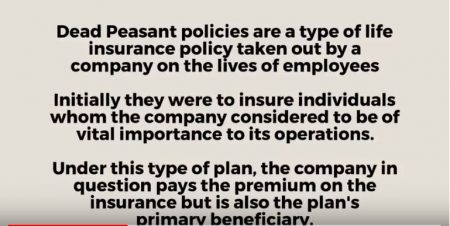 (Jul. 5, 2018) — [Editor’s Note:  The widow of civilian contractor Thomas J. Boyle, Jr. has released Part 6 of a video series she created detailing the inconsistencies and denial of life insurance benefits associated with his death in Kandahar, Afghanistan on June 19, 2012.

The video can be viewed here:  https://www.youtube.com/watch?v=xBl6nuies6I&feature=youtu.be

Instead of his family receiving benefits after he was killed during an insurgent attack on an Army base, Mrs. Boyle reports that her husband’s employer, which reportedly purchased a “dead peasant” policy on her husband’s life, received a substantial payout after he died.  Such policies have been the subject of considerable controversy and a lawsuit won by a group of plaintiffs against Walmart in 2006.

Mrs. Boyle was further denied life insurance benefits by five insurers who invoked a “war risk” exclusion even though they were aware, when granting Mr. Boyle the policies, that he was deployed in a high-risk part of the world.]

Previous videos in the series can be found here:  https://www.thepostemail.com/2018/06/28/who-killed-thomas-boyle-part-5-video-released/]