“TO THE VICTOR BELONG THE SPOILS” 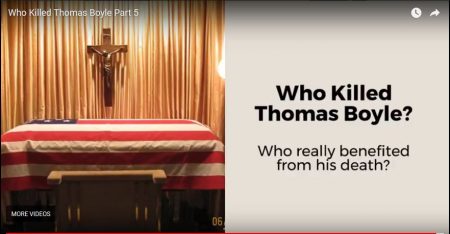 (Jun. 28, 2018) — Pauline Boyle has released Part 5 of a video series she created about the death of her husband, Thomas J. Boyle, Jr., who was working as a civilian contractor in Afghanistan following a 31-year career as a Chicago Police Department officer.

The video is found here:  https://www.youtube.com/watch?v=-oi3KR5pBJk

On her own, Mrs. Boyle has investigated the circumstances surrounding her husband’s death on June 19, 2012, which the Army has never officially explained.  As is detailed in the new video, Mrs. Boyle was provided three death certificates stating as many causes of death.

An independent autopsy conducted after an exhumation contradicted the findings of the military autopsy, indicating that Mr. Boyle was the victim of multiple gunshot wounds.

Eyewitnesses of the insurgent attack that day related to Mrs. Boyle that her husband was not killed by the terrorists, as the Army has led the public and her to believe, but rather, by “friendly fire.”

Part 5 focuses on the inaccurate “stipulation of facts” Mrs. Boyle was asked to sign attesting to the manner in which her husband was killed and what she has described as “fraudulent claims and reimbursement” on the part of Zurich American Insurance Company.  Under the Defense Base Act, Zurich pays benefits on behalf of the Department of Labor (DOL) to American workers injured overseas as well as to survivors.

The law firm Flicker Garelick represents Zurich American and deals directly with survivors, as it has with Mrs. Boyle.  According to documents Mrs. Boyle has been able to obtain from her husband’s file, Zurich American is receiving complete reimbursement from American taxpayers for its payouts to her as a result of Mr. Boyle’s death having fallen under the War Hazards Compensation Act, although based on the false death narrative.

When Mrs. Boyle attempted to collect life insurance benefits from policies her husband purchased before his final deployment, all carriers, except for Aetna, claimed an exemption based on a “war risk exclusion.”